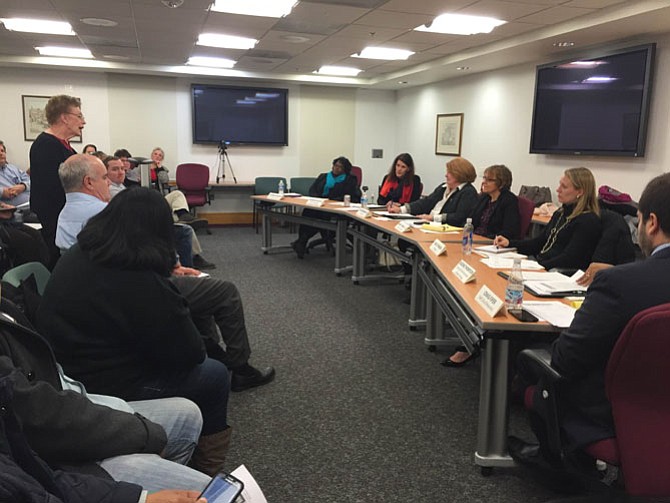 Speakers at a city meeting compared the potential plans to de-Confederate Alexandria to everything from the backlash against soldiers returning home to Vietnam to ISIS and the Taliban. At the second meeting of the Ad Hoc Advisory Group on Confederate Memorials and Street Names, a public comment section sparked tensions and highlighted a deep divide in how Alexandrians still view a war over 150 years ended.

The Sister Cities Conference Room was standing room only at the Feb. 8 meeting. The divide was also a racial one. The vast majority of the 30 or so attendees were white, while only four or five attendees were black. All eight white speakers spoke against renaming the streets and moving the memorial, while both of the black speakers were in favor of renaming the streets.

For those defending the Confederacy’s legacy in Alexandria, reasons ranged from the practical to the ideological. The city calculated that there were 220 street signs throughout the city with Confederate namesakes, with $171,150 in total replacement cost. Wanda Dowell, who lives on one of the affected streets, said she would rather her tax money be spent on helping citizens find jobs or benefit the homeless. Dowell and Old Town resident Yvonne Weight Callahan also noted that the change in name could cause problems for businesses or homes living on those streets. But even among those with concerns about the practicality, the problem is still rooted in a historical view of the confederate veterans.

“These men came home to an Alexandria in a sad situation, but they rebuilt the city,” said Dowell. “[They] served as City Council members, as mayors, firefighters, business [leaders] ... These were men who came back here, and we owe them respect.”

“I came here just to listen, but what I heard was one perspective.”

Dowell added that she didn’t want to see the city sanitize the history and hated how the confederate soldiers were being vilified.

One of the more impassioned defenders of the confederate names and symbols was Ellen Latane Tabb, a former teacher who sparred with members of the advisory group after repeatedly attempting to quiz them on history. Tabb said she was disappointed in the City Council, which she accused of trying to tear the local history apart.

“Those are our men,” said Tabb. “Those are Virginians. Those are American citizens. If we’re going to do something to erase all of that, shame on us.”

“I had nothing to do with that war, none of us did,” said Priscilla Roberts. “Can’t we shake hands and say we’re grateful to be here?”

Roberts added that there were white slaves as well, and told those who were offended by Confederate imagery to get over it. But by the end of the meeting, several of the black citizens decided they couldn’t sit idly by.

“I came here just to listen, but what I heard was one perspective,” said Joe Sampson. “[You’re] not thinking of both sides of the coin. It’s easy to look back with rose-colored glasses, but the experience for African Americans in Virginia was not the same … We cannot continue to make decisions that stand on the shoulders of one side. We can try to smudge history as much as we want. We can say that it wasn’t something, but we all know what the reality is, and the reality is that it was fought over slavery, over the commodity of African people, over human beings.”

The fact that all of the white speakers had supported keeping the confederate names had not escaped Sampson’s notice.

“As much as we want to say we’re all Americans, no one has the decency to speak up for the [other] side,” said Sampson, “and there is another side to this story, a loud side that was never given an opportunity to speak. Maybe we will have that opportunity now, maybe we won’t. But if we have a voice, we will use it.”

Sampson was joined by Chaka Lindsey, both of them veterans who took exception to another speaker claiming to represent the offended veteran population. Lindsey, a native of New York, said he couldn’t understand why the other citizens were hurling words like “Yankee” around as an insult.

“These words have meanings,” said Lindsey. “Listening to people still use terms that were divisive, and are divisive in 2016 ... I’m concerned. I’m very concerned. People want to say and act like symbols mean nothing. That’s not true. We’re all intelligent and we all know that’s not true … Those symbols inspire. They’re symbols of hate. You cannot erase or change that.”

While one citizen promised to get veteran groups involved, Sampson, an Air Force veteran, said he would not appreciate living on a street named after a Confederate general.

The next meeting will be held on March 28, tentatively at the Lyceum, to discuss issues related to the Appomattox statue.