Alexandria: The Battle Without End
Votes

Alexandria: The Battle Without End

One hundred and twenty-seven years ago, the Rev. G.H. Norton thought the Appomattox Confederate statue would help close the wounds of the Civil War.

“May all hatred and strife be buried in their graves,” Norton said, as recorded in the Alexandria Gazette at the time of the statue’s dedication in 1889. “May the memory of our departed heroes inspire us with patriotic devotion.” 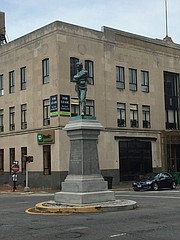 “The Civil War isn’t over yet. It’s in people’s minds and in the cultural fabric of Virginia. This is just the beginning of a battle over locals saying we’d like it moved and people in Richmond saying no.”

Over a century later, at the Sept. 17 City Council meeting, it was clear that some strife on both sides hadn’t been very deeply buried. In 2015, the City Council voted to establish the Ad Hoc Advisory Group on Confederate Memorials and Street Names. The group recommended that the Appomattox statue on South Washington Street should remain in place with efforts made to add context nearby, to rename Jefferson Davis highway, and not to change the names of streets named after Confederates unless petitioned under the existing process. But in a series of unanimous votes, the council moved to not only adopt the changes recommended by the advisory group, but to go one step further. The City Council will ask the state legislature for permission to move the Appomattox statue to the side of the street, on a grass plot in front of The Lyceum.

The success of this petition is unlikely.

“I’m skeptical that we could pass legislation to move it unless the Daughters of the Confederacy [who maintains the statue] are involved,” said state Sen. Adam Ebbin (D-30). “There would be skepticism about moving it from a place of prominence. A case would have to be made about why this is different, and I don’t know that there’s a case that could convince my colleagues in the House of Delegates. Even with the Daughters of the Confederacy, it’s unlikely. I’d say it’s close to zero percent.”

A law passed through the General Assembly in 1998 prohibited local governments from altering monuments to wars and veterans. However, the City Council of Danville removed a Confederate flag from a historic site and the ruling in a resulting lawsuit at the circuit court said that the law only applied to monuments and statues built after the law was passed. In response, a bill passed by the legislature earlier in 2016 to retroactively grant coverage protection to monuments and memorials built before 1998, but the bill was vetoed by Gov. Terry McAuliffe. Where that leaves Alexandria if their petition to the state is denied remains unclear.

“I’d be surprised if the members of the General Assembly were inclined to wade into this controversy,” said A.E. Dick Howard, a professor of Law and Public Affairs at the University of Virginia, in an email. “Tempers run high on both sides: those who see Confederate monuments as a legacy of a racist past, and the heritage folks who oppose erasing history. Legislators might well see themselves as having little to gain by embarking on this debate.”

According to Howard, the Appomattox statue isn’t just the center of a city debate, but a statewide controversy over whether localities can control Confederate memorials.

“Those in Alexandria who want the matter to be decided at a local level would, I imagine, appeal to the notion that local people know more about local feelings and therefore ought to make the decision about the monument,” said Howard. “They could point to other communities, such as Charlottesville, where a spirited debate is taking place over the prominence of statute of Robert E. Lee and Stonewall Jackson in local parks.”

Toni Travis, a professor of Political Science at George Mason University, agreed that the state legislature approving of the statue move seemed unlikely.

“It’s left in the hands of the state legislature, it’s a Republican majority and they have every right to say no. Nothing in Virginia moves very quickly, not in Richmond at least. It’s going to take a while. It may come five or 10 years down the road. The Civil War isn’t over yet. It’s in people’s minds and in the cultural fabric of Virginia. This is just the beginning of a battle over locals saying we’d like it moved and people in Richmond saying no.”

“But underlying that, there’s a lot of sentiment that Richmond is the capital of the Confederacy, and that we have dead who were war heroes who should be remembered,” said Travis. “Publically, the face is going to be that [the state] has the right to decide. But there’s really two levels.”

Travis also said it isn’t an issue that cuts cleanly across party lines.

“More conservative members, be they Republican or Democrat, are not going to be for moving the statue,” said Travis. “The perhaps younger, more urban, more liberal would say that maybe it’s time to say, but I don’t think changing it from Republican to Democratic legislature will be enough. I don’t think it’s party based, I think it’s Virginia history.”

Even Ebbin, a Democrat representing Alexandria, Arlington, and parts of Fairfax, said he had mixed feelings on the proposal.

“I wouldn’t mind it moved to the corner by the Lyceum, but on the other hand it’s been there for a hundred years. It’s a forlorn soldier looking south, sad and defeated towards his colleagues, but I also don’t really like honoring the Confederacy.”

The proposal’s unlikely prospects at the state level did not go unnoticed on the City Council dais. Councilman Tim Lovain motioned to approve the Ad Hoc Advisory Group’s recommendation to add context to the site, and Mayor Allison Silberberg added the recommendation to ask the state for permission to move the statue.

“We’re asking staff to ask a question we already know the answer to,” said Vice Mayor Justin Wilson. “The code is pretty straightforward. We don't need to ask what the code means, we know what it means.”

Wilson referenced the Danville case, which is currently being appealed.

“Portsmouth is having a similar conversation and is waiting on the outcome of the Danville case,” said Wilson. “There are things going on around the state, legal changes that could affect our authority on this matter.”

Silberberg said the City Council will continue to work to get the Daughters of the Confederacy onboard with the statue’s move, but that the city will ask for the state to allow the change whether or not the group has signed on.

“For some who say this is not possible: you don’t know until you ask,” said Silberberg.

The statue was the most contentious of the three issues considered at the meeting. No change was recommended for renaming streets potentially named after Confederate leaders, with the Ad Hoc Advisory Group’s recommendation citing the vagueness and complexities of the history of some street names. The council also unanimously agreed to direct the city manager to begin the process of renaming Jefferson Davis Highway and to generate recommendations for a replacement name. Some informal names were thrown around during discussion, most prominently Patrick Henry Street as the road divides into Patrick and Henry streets as it passes through Alexandria. Wilson expressed concerns that this might cause some navigational confusion and Councilman Paul Smedberg noted that the city would be replacing a street named after one slave owner with a street named after another slave owner.

While the council was unanimous in its decisions, the public speakers on the topic were sharply divided. Most said they believed the recommendations of the Ad Hoc Advisory Group reached an acceptable balance of preservation and progress. Others said the group was washing away Confederate history.

“Jefferson Davis was a hero,” said Bernard Berne, an Arlington resident. “He believed secession was constitutional. President Lincoln had started a war by invading … Slavery to some people was really bad, but to him it wasn’t. This is a whole thing of the north denigrating Davis; he was a tragic hero. He believed he’d done the right thing.”

For others, the group wasn’t doing enough to respect the lives of black Americans kept in slavery by the Confederacy.

“I think the [group] failed miserably,” said Greg Thrasher. “I am sick of compromises. A compromise labeled me and my ancestors as three-fifths of a person. I’m offended by compromise. I’m offended that we have, even today, commissions to define my ancestor’s dignity … How long does it take for us to get this humanity? We’re not a civil nation anymore. You failed us. This [group] failed us. I’m not compromising, never again. Black lives matter.”

“It was clear from the beginning that we weren’t going to please everyone,” said Mary Lyman, chair of the Planning Commission and advisory group.

Councilman John Chapman addressed citizens speaking on both sides of the argument, rebuking the idea that Confederate leaders didn’t understand that slavery was evil, but saying that the statue and street names were still a learning opportunity for Alexandrians.

“I pass the statue on the way to city hall every time,” said Chapman. “The Confederacy is something that I cannot agree with. I cannot support it. I believe if the Confederacy had won, the makeup of this dais would not be the same. Looking at the Civil War, it’s not North vs South, it’s freedom or not. Looking at this case, I can understand why generations would want to have it torn down, but I think it’s a terrific teaching point that we are not all equal yet. We have not sewn up our wounds from civil and racial conflict.”