Uncovering the Roots of Slavery
Votes

Uncovering the Roots of Slavery 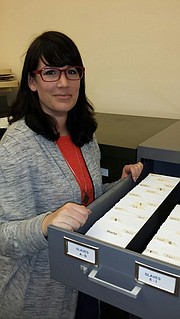 George Mason University student Georgia Brown organizes the Fairfax Court Slavery Index by searching more than 10,000 references to slaves in the Fairfax Circuit Court Historic Records Center will and deed books that date from 1742 to 1870.

This is one of the documents that contained data for the Fairfax Court Slavery Index.

Anyone interested in searching the Fairfax Court Slavery Index should contact the Fairfax Circuit Court Historic Records Center at 703-246-4168 or historicalrecords...

A local college student is spending much of her senior year scouring the last wills and testaments of residents of Northern Virginia. While many of the documents contain antebellum treasures like silver serveware, rifles and horses, Georgia Brown is looking for more haunting line items: slaves.

“Nobody had ever combed through all 120 years of will books line by line before, so we had no idea what I would find,” said Brown, a George Mason University student. “It is pretty exciting seeing George Washington’s and George Mason’s wills and inventories as it gives me a peek into their households… It is fascinating to see what people considered important enough to pass on to a specific person once they were gone. Some people were very worried about their riding horses or slaves, while others cared more about their…silver spoons with their monogram.”

BROWN, who is a veteran of the United States Navy and a senior majoring in history at George Mason University, began an internship at the Fairfax County Circuit Court Historic Records Center as part of her degree program.

After expressing an interest in the Civil War and slavery, Brown was asked to comb through the probate records index. The index includes wills, inventories, and estate accounts from 1742, the year Fairfax County was founded, to 1865, when the Civil War ended. Each time a slave was mentioned in an estate, she recorded the slave’s name, age, the owner’s name and other details.

“We didn’t know if the slaves would be listed with names, first or last, if there would be family groups, or if they would be mentioned in wills, just like livestock,” said Brown.

”We didn’t know if the slaves would be listed with names…or if they would be mentioned in wills, just like livestock."

Brown was surprised to find not only the names of slaves, but birthdates, emancipations, descriptions of character, sales and bequeathments showing trails of ownership. “After constantly showing my exciting findings to the archivists and [Maddy McCoy] a historian who specializes in African American genealogy, we started working on ideas for a way to capture this information in a database that would make the data searchable to the public,” said Brown. “I would say that after reading the first few documents mentioning slaves we knew we would need to capture all the information I was finding in the will books.”

Heather Bollinger, assistant archivist at Fairfax Circuit Court Historic Records Center, supervises Brown and other interns and helped formulate the idea of a slavery database. “To determine which of the people own slaves – we realized an abundance of information that needed to be captured,” she said.

While the slavery index is still in its infancy, Brown hopes that, when complete, it will provide answers for those who have questions about their ancestry, answers that, for the descendents of slaves, are often hard to find.

“Our database currently is a 3x5" card catalog so it is very low tech,” said Brown. “This project is a bit of a trial run.”

When the project is complete, “it will be helpful to people living not only in Fairfax County, but Arlington and Alexandria, too in tracing ancestral family lines and understanding slave economy as it functioned in Fairfax county,” said Bollinger.

Brown adds, “It will also be useful to historians doing research in African American history or history on early Virginia.”

ONE SUCH HISTORIAN is Maddy McCoy who had been researching slavery in Fairfax County for the last decade. "Once the index is complete, I will utilize that data to interpret slavery in this county in a way that has never been able to be done before," said McCoy who is serving as a consultant on the Fairfax County Slavery Index project "This is an amazing project and they are doing a great job."

Originally from Oregon, Brown says she was surprised that some of her beliefs about slavery and the south were unfounded. “From the limited education I have on slavery, I predicted that most of the slave owners would treat their slaves as chattel, or worse,” she said.

By combing through documents, Brown concluded that the relationships between slaves and masters were more complicated than she originally imagined. “It seems that because Fairfax County was made of smaller farms, the relationships between slaves and their masters, for better or for worse, were more intimate,” said Brown. “It was actually quite rare to see a will where the slave owner was indifferent or wanted his slaves sold. Unless a sale was absolutely necessary to provide for their families, most owners would do anything to keep their slaves.”

THE MOST FASCINATING wills, says Brown, were those that included emancipations. “Every time I saw ‘to be freed’ my heart would skip a little,” she said. “Some emancipations were straight to the point, while others were almost a love letter to their former slaves. I will admit that some of the words of respect made me tear up a little.”

Brown hopes that her project will serve as a model for counties in other parts of the south. “A project such as this is very doable,” she said. “The process can be grueling, but it is definitely a labor of love when we see all the people who are no longer lost in the archives.”

Bollinger and others in the research group say they haven’t had anyone find an ancestor from the database complied so far, and they estimate that it will be more than one year before the project is complete. Anyone interested in searching the records should contact the Fairfax Circuit Court Historic Records Center at 703-246-4168 or historicalrecords@fairfaxcounty.gov.