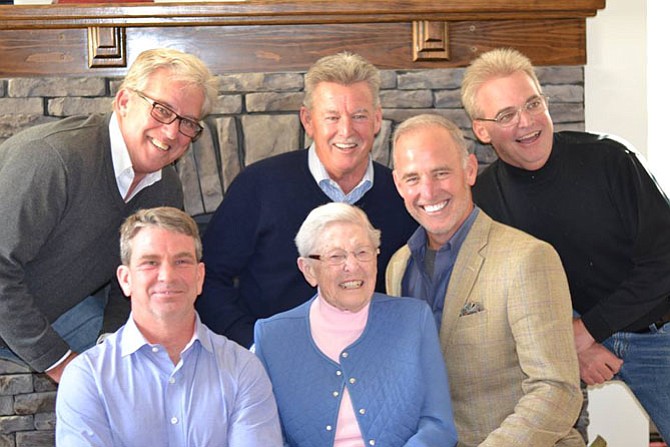 Ruth Ann Harvey died on Jan. 8, at the Mount Vernon Nursing and Rehabilitation Center in Fort Hunt. She was 92 years old.

There was standing room only for the viewing at Demaine Funeral Home and a full house at the Jan. 12 mass at Good Shepherd Catholic Church as people came to say their final farewell. 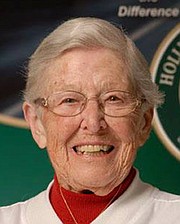 Father Tom Ferguson, pastor at Good Shepherd Catholic Church, spoke at length about Ruth’s love, her kindness, her generosity — and most of all her faith.

Not only did he mention her attachment to her rosary beads, but that theme was repeated by both her granddaughter, Jennifer Harvey, and her son, Michael Harvey — both of whom spoke at the service.

Michael Harvey went so far as to say, “I don’t know what rosary beads are made of, but I can’t believe that she didn’t wear them out. I can remember many a night when she would be kneeling by her bed and praying.”

Given that Ruth lost her husband after 20 years and raised seven boys while running the family business, she had a lot of praying to do.

She had 12 grandchildren and six grandchildren. Jennifer Harvey said that her grandmother told her, “God never gives us more than we can handle.”

Michael Harvey said that his mother not only prayed for everybody in their family, but also everybody who came into the gas station. Gesturing to attendees at Good Shepherd, he said, “She thought of all of you as part of our family.”

During the years that Ruth was behind the counter at the gas station, now Hollin Hall Automotive, she greeted everyone with a smile. She listened to their problems and prayed for them. She held court at Paul Spring Retirement Community for the years that she was there.

Ruth found the garden to be a great source of comfort. Michael Harvey said that all of the boys spent time hoeing, planting and harvesting that garden. “She gave food to people who needed it and canned the rest of it so we wouldn’t have to buy food in the winter,” he said. “She and my father were very frugal. They only took one of the boys shopping for clothes — the oldest, who passed the clothes down from boy to boy.”

Jennifer Harvey spent a lot of time with her grandmother. “Recently she asked me if I had met anybody. I said that I hadn’t and she told me not to worry and patted my leg. Then she asked, ‘How old are you?’ When I said that I was 42, she patted my leg again and said, ‘Oh well.’”

“My grandmother taught me so much,” said Jennifer. “I can only hope that I have a small part of her in me.” 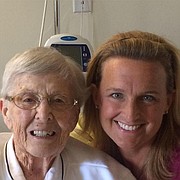 Michael Harvey talked about how she welcomed all of the boy’s friends into their home. Many came to her for guidance and her sons knew not to interrupt a conversation that she was having with one of their friends — often in the garden. When people asked for advice, she would say, “Well, what do you think you should do?” More often than not, this would point the person in the right direction.

“When I was young, I couldn’t understand why all our friends called her mom,” said Michael Harvey. “I wondered where their mothers were.”

In addition to serving as surrogate mom to many in the Fort Hunt community, she also gave many students their first jobs at the gas station. Tom Harvey now owns and operates Hollin Hall Automotive. Michael thanked Tom and his wife, Judy, for caring for their mother, especially at the end when she was so sick. As Ruth neared the end, the other boys scrambled to get into town. She took her last breath shortly after the last son arrived.

Tom Harvey said, “I will miss the incredible close relationship that I shared with my mother as my mom, my business partner, my mentor on a daily basis for 66 years. My favorite story of my Mom was when I caught her reading something one day behind the cash register. I could see her looking down and her lips were moving …. I snuck up and grabbed it and it was a well-worn, dog-eared prayer book, entitled “Prayers for the Wayward Son.” She knew it by heart.”

Jennifer Harvey recalls a visit that she took with her grandmother to Ruth’s childhood home. Born on March 11, 1923 in a farmhouse in Custar, Ohio, Ruth enjoyed going back home to visit.

“We walked along the streets with modest homes and grandma said how her parents (Raymond and Matilda) gave her faith.”

Ruth graduated from Tiffin University in May of 1941 and immediately came to Washington, D.C. to work for the War Department in June of 1941. She was among the first group to move into the newly built Pentagon where she continued to work throughout the duration of WW II.

She met her husband, Lee, on a blind date in Sarasota, Fla. They were married on Nov. 16, 1946. After the birth of their first son, they moved to Alexandria.