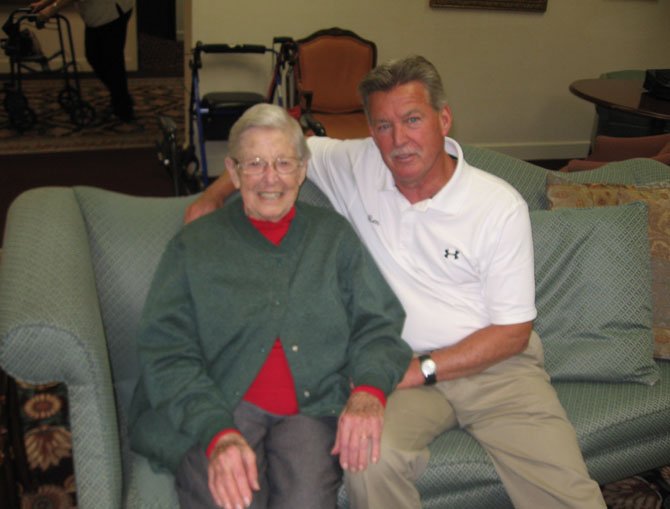 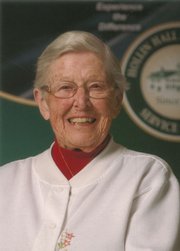 Leon Harvey at the station around 1961.

Fifty-two years ago Leon and Ruth Harvey opened the Hollin Hall Gas Station for business. Now, after more than a half century “Ruth” or “Mrs. Harvey” as many know her, has retired and moved out of the only home in which she ever lived in the Fort Hunt community and into the Paul Spring Retirement Center just a few minutes from the station at the corner of Fort Hunt and Shenandoah Road.

Whether Ruth Harvey was saying hello to Washington political figures who call Mount Vernon their home such as the late White House Press Secretary Tony Snow or the many other Fort Hunt area residents, she treated everyone with a warmth that made her and her family a fixture in the close knit Fort Hunt community.

Two years ago at the station’s 50th anniversary, hundreds of well wishers paid tribute to Ruth Harvey, her children Tom, Mike, Steve, Bob, Jimmy, and the rest of the Harvey family. “It just won’t be the same pulling into the station for gas without Mrs. Harvey’s smiling face looking out from the station office window,” said one customer.

Never one to complain or let personal issues interfere with the gas station business, Ruth Harvey’s years of service have not always been trouble-free. Soon after opening the gas station her husband, Leon, suddenly died after suffering a massive heart attack. He was 51. She was 41, the mother of seven children, and didn’t even own a driver’s license. “My mother gave me $35 to pay for a driver education class. She didn’t want me to take from my cash reserve for my weekly groceries. My son Tom was the only one in the family with a driver’s license at the time.”

After her husband’s death she was faced with caring for her large family while also struggling to maintain the business. She gives credit to the community for making it possible: “I couldn’t have survived without the loyalty and love of the community. They came to the station and were so nice and supportive of me and my family and helped out in many ways. I will never forget their kindness and support.”

She also credits winning dozens of oil company sales awards with helping to give her station the kind of publicity and credibility that helped jump start the business.

She had to withstand other family losses in the early years. In 1970 her son Butch was killed in the Vietnam war, and another son Lee died in 2001 of an infection. Undeterred, she continued to juggle being a mom and a businesswoman, and reflect the quiet determination and positive outlook which is, according to her son Tom, a hallmark of her character.

“Mom has a way of bringing out the best in our family and all who come in contact with her,” he said. “Her positive outlook on life, her way of finding the good in everyone, and her focus on family and the friends she has made in the community has been an inspiration to all of us and we are continually reminded of how lucky we are to be a part of her life.”

In a interview at the Paul Spring Retirement Center, Ruth Harvey gives credit to her family and the community for whatever success and happiness she realized through the years: “What I have always liked most about the Fort Hunt community is the people. I felt this way soon after I came up from Florida with my husband and the children and it hasn’t changed. Other than the passing of Leon, and my two sons, I wouldn’t change a thing in my life. Also, I have been blessed with good health which helped me to keep on the job. Several years ago I had a minor stroke and the nurse at the hospital asked me what doctor I would like her to contact about my condition. I told her I didn’t have a doctor. Until the stroke I have really not had a health problem and except for giving birth to my children in hospitals I really have not been to a doctor. Right now I visit a cardiologist every six months and take a few pills to prevent another stroke. My mom lived to be 103 so I probably inherited my mom’s good health.”

She turned 90 years old on March 11 of this year. She looks forward to the visits from her extended family of five children, 10 grandchildren, and five great grandchildren. Her son Tom took over running the business in 1971 and now owns it outright.

She tells the story of a recent incident about her retirement and continuing ties to the station. In March of this year shortly after she retired, Tom called her and said he was shorthanded at the station and could she come in to help out. Of course she agreed. He sent over someone to pick her up and drive her to the station where she happily and proudly put in three hours. Ruth Ann Harvey, the matriarch of the Harvey family and an icon of the Fort Hunt community, retired-almost, after 52 years.