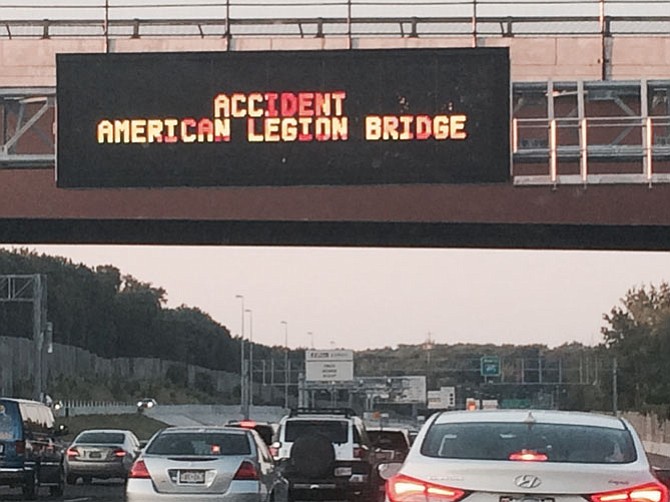 Accident Ahead: McLean Citizens Association and many county business groups call for improvements to the American Legion Bridge in part because commuters clog McLean and Great Falls roads to circumvent the Beltway backup toward the bridge. Photo by Ken Moore. 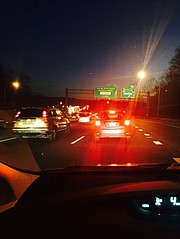 The American Legion Bridge can back traffic up into Virginia anytime of the day or night.

Each weekday, nearly 300,000 vehicles cross the American Legion Bridge, and each day traffic backs up into McLean, Great Falls and beyond.

Vehicle speeds during the afternoon commute slow to an average of 34.9 going towards McLean and 22.5 from McLean to the bridge, according to McLean Citizens Association. Traffic backs up for miles.

Glenn Harris, vice president of the McLean Citizens Association said it was important for MCA to get on the record. “I would like to see MCA come out in favor of fixing this enormous problem,” he said. “This isn’t exactly rocket science.”

Sally Horn said it was time to do something. “It’s time for us to act. If we’re going to say something, we should change it at this juncture,” said Horn, past president of the McLean Citizens Association.

“This is a huge issue and has enormous implications,” said Jim Roberts, head of McLean Citizens Association’s transportation committee.

The McLean Citizens Association passed a resolution at its last meeting urging the Commonwealth of Virginia, the State of Maryland and the U.S. Department of Transportation to “expeditiously develop and implement a joint plan for the expansion of the American Legion Bridge and its connecting roadways, and the eventual construction of an additional parallel bridge on the eastern side next to the existing span over the Potomac River.”

The American Legion Bridge is entirely in the State of Maryland.

MCA ACTED to encourage efforts between the Montgomery County Council and Fairfax County Board of Supervisors, which wrote to the Governors and Transportation Secretaries of Maryland and Virginia on Oct. 19, 2015, “asking the states to come together and focus on making improvements to address the severe congestion problems at the American Legion Bridge.”

A Potomac River Crossing Conditions study conducted by the Virginia Department of Transportation (VDOT) and presented to the Virginia Commonwealth Transportation Board (CTB) in July of 2015, found that the American Legion Bridge suffers from the worst congestion of all bridges crossing the Potomac River, and had the projected largest growth in traffic volume through 2040.

In 2009, The Maryland State Highway Administration and VDOT concluded The West Side Mobility Study in 2009. “VDOT staff recommended in that study that the ‘top priority’ for addressing Potomac River crossings should be extending the Express Lanes across the American Legion Bridge to the I-270 interchange.”

“We want to put some pressure on the state of Maryland,” said Rob Jackson at the Jan. 6 MCA meeting.

“I don’t know why people are reluctant,” said Harris.

The advocacy group Northern Virginia Transportation Alliance also recommends upgrading the American Legion Bridge with four conventional and two managed/HOT lanes in each direction, and extending the I-495 HOT lanes in Virginia to I-270 western spur in Maryland.

BUT THE RIVER CROSSING has caused intense debate and controversy for the last two decades, and had its critics at the Jan. 6 MCA meeting, as well.

MCA member Katie Probst urged caution. She suggested that the association not dictate the definite solution, but advocate that something needs to be done.

“I feel like this is a huge deal to support. It seems like a rather big issue,” she said, stating that she believed she needed more information and more time to understand all the implications.

“Do you realize you just voted for adding two lanes to the American Legion Bridge without any public input?” said April Georgelas, who attended the meeting not as a member. “I’ve been here for 40 years and I’ve never seen anything like this.”

Georgelas said later that McLean has suffered from ongoing express lane construction on the Beltway for years, and she doesn’t welcome more.

Now, “the shoulder project added another lane of merging HOT lane traffic into an already overburdened and dangerous merging area of the Beltway up to the American Legion Bridge, all without public input,” Georgelas said.

RESIDENTS ON THE OTHER side of the river in Potomac, Md. have advocated against second river crossing in Montgomery County.

During a multi-year Master Plan process, ratified in 2004 by the Montgomery County Council, Potomac’s blueprint for landuse said a second bridge crossing through Potomac violates the responsibility of Potomac as a buffer and protection to the Potomac River.

However, members of the Montgomery County Council and the Fairfax County Board of Supervisors jointly sent a letter to Maryland Gov. Larry Hogan (R) and Virginia Gov. Terry McAuliffe (D) on Oct. 19, asking that the two states “come together and focus on making improvements to address the severe congestion problems at the American Legion Bridge.”

Improving the American Legion Bridge should take priority over the possibility of building another crossing of the Potomac River, they said.

“Montgomery County believes strongly that our limited resources are best spent fixing the American Legion Bridge, and we should not be distracted by a divisive second crossing. That’s why we, as two bodies, are calling on our governors to move forward with this vital transportation improvement as quickly as possible."

“The American Legion Bridge is the major chokepoint in our regional transportation system and it must be fixed,” said Councilmember Roger Berliner, chair of the Montgomery Council’s Transportation, Infrastructure, Energy and Environment Committee. “Adding an additional HOT lane in each direction will ease congestion and promote transit. Our two states must work together to make this happen.”

PROPOSALS for a possible new bridge west of the American Legion Bridge are not new, and neither is opposition to the concept.

In 2000, U.S. Rep. Frank Wolf (R-Va.), now retired, requested $2 million to conduct a study on the feasibility of a Techway bridge over the Potomac River. Public outcry and preliminary analysis of the disruptions the bridge would cause prompted him to cancel the study seven months later.

In 2003, Maryland Gov. Robert Ehrlich (R) and Virginia Gov. Mark Warner (D) announced their support for a new Techway study because they believed the second crossing would benefit “U-shaped commuters” traveling from upper Montgomery County to western Fairfax County (e.g., from Gaithersburg to Reston). The Virginia Department of Transportation conducted a license plate study on the American Legion Bridge and found that only about 8 percent of Virginia and Maryland commuters would benefit from the Techway, because most commuters are traveling to destinations on or inside I-495 rather than to the suburbs outside it.