Opposing Views on Display at Saturday’s Protest in McLean
Votes

Opposing Views on Display at Saturday’s Protest in McLean 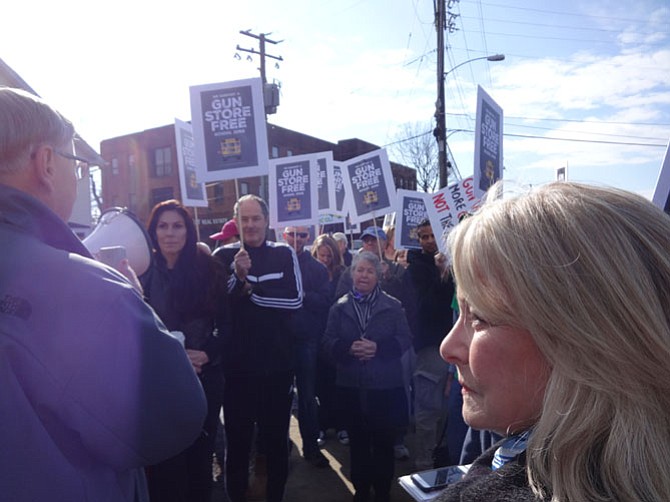 Two groups of protestors faced each other across the parking lot entrance to McLean gun store NOVA Firearms on Saturday, Jan. 16. Most chanted for a gun-store-free school zone, while others wore “guns save lives” stickers. Since the previous September protest when NOVA Firearms first opened on property adjacent to Franklin Sherman Elementary School, local politicians have sought to prevent gun stores from locating close to schools.

The Virginia General Assembly prohibits localities from passing ordinances that would regulate where guns are sold.

“It’s common sense. It’s not about gun control. It’s about school safety. I’m looking forward to the day when we bring gun control home to Fairfax County and not have the state dictate to us what we should do in terms of protecting our children from guns,” Supervisor John Foust (D-Dranesville) said.

State Sen. Barbara Favola, Del. Kathleen Murphy and Del. Marcus Simon are introducing bills that would transfer power from the state to local governments on how close gun stores can be to schools.

The legislation is based on concerns of constituents that NOVA Firearm’s proximity to an elementary school poses a safety risk. Some constituents said the purpose of a gun free zone is to give schools visual warning of people carrying guns nearby so the school could react, perhaps with a lockdown. Some constituents are concerned that the regular sight of guns outside the school defeats this purpose.

“It’s difficult to ascertain someone who is carrying a gun who is a good guy from who is a bad guy,” Franklin Sherman PTA member and father Matt Rampy said. “I fear you could have a situation where people become complacent with people who have guns.”

Some parents have moved their children to different schools. Franklin Sherman has passed a resolution calling for a gun free school zone.

By contrast, Arlington resident and salesman Jack Blakely, a protester supporting NOVA Firearms, said the shop’s location is a non-issue.

“The guns are not going to magically fly out of the store and into children’s hands,” Blakely said.

Politicians protesting in favor of the legislation included Foust, Favola and Murphy as well as Del. Rip Sullivan and Fairfax School Board Member Janie Strauss.

“Regardless of whatever legislation gets passed, we’ll get grandfathered in anyway,” NOVA Firearms proprietor James Gates said in the belief that a new law could not force his shop to change location.