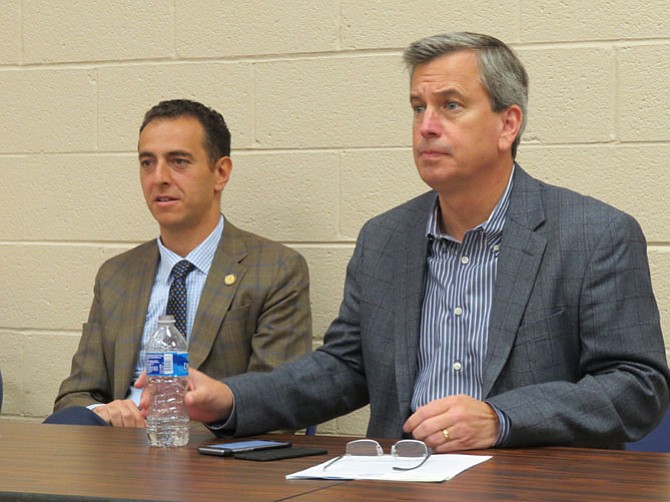 Alexandra Reed Lajoux advocates for youth in foster care without a home, “sans domicile fix, as the French say.” The Fostering Futures advocate said 5,375 youth aged out of Virginia’s foster care system between 2008 and 2015.

In fact, 56 percent of the country’s 18-26 year olds currently live with their parents, according to the Pew Research Center.

“Unfortunately, these kids don’t have a nest to come back to,” said Yusuf Jamaludeen, who mentors foster children.

They were calling for support of legislation called Fostering Futures that would leverage federal funds to help former foster children who age out of the system without being adopted or reunited with family.

More than one in five teenagers who age out of foster care without permanent connections will become homeless after 18; one in four will be involved in the criminal justice system within two years of leaving the foster care system, fewer than three percent will earn a college degree by age 25 compared to 28 percent of all 25-year-olds; and only 58 percent will graduate high school by 19 compared to 87 percent of all 19 year olds, said Jamaludeen.

On the other hand, foster youth who receive services after 18 are two-to-three times more likely to be enrolled in college, more likely to avoid homelessness, school dropout or incarceration, and are more likely to seek health and mental health treatment when needed.

“We can pay now or pay more later.”

MORE THAN 45 people attended the hearing Saturday, Jan. 16 at the McLean Community Center.

“We are very eager to hear what’s on your mind,” said Howell.

“To hear your ideas and have conversation about what you think is important,” said Favola.

“I look forward to hearing from you,” said Rip Sullivan.

“To hearing your questions and finding out what you want me to be working on,” said Marcus Simon.

OF COURSE THE RALLY from 11 a.m. to 1 p.m. in front of NOVA Firearms was on many people’s minds. Organizers held the rally in support of House Bill 422 sponsored by Simon and Murphy to allow local government to prohibit retail gun sales, gunsmithing services, or operating a sports shooting range within 1,000 feet of a school. Favola has similar legislation in the senate.

“We live in a society where gun violence in schools is a reality. At Franklin Sherman they practice emergency drills where they practice huddling in a corner,” he said. “Just think about that.”

“So when NOVA Firearms opened up, I thought this doesn’t make sense,” Sullivan said. “My kids said, ‘Dad, we don’t feel safe with a gun store right out our window.”

“Thank you for your persistence against such entrenched opposition in the legislature,” she said.

“We will be in Richmond on Jan. 18 for a vigil for victims of gun violence,” Gregory said, along with more than five busloads of people who will then lobby for gun legislation. In particular, they want localities to have the right to regulate how close guns stores can operate to school zones.

Virginia is a Dillon Rule state, which means that localities have only the powers expressly given to them by the General Assembly.

“I’m incensed by what is happening with gun violence here in Virginia and across the country,” said Howell. “I keep hitting myself in the face, and say, ‘Remember, you’re in Virginia, darling.’”

Murphy, Favola and Rip Sullivan attended the rally in McLean earlier in the day.

“We were just at a rally and we watched very quickly when hate is involved that common sense goes out the window,” said Murphy.

THE GENERAL ASSEMBLY is “off to a rousing start,” said Rip Sullivan, with a “very partisan issue” involving Judge Jane M. Roush, who Republicans are trying to keep off the Virginia Supreme Court, despite an exemplary reputation and record as trial attorney and Fairfax County Circuit Court Judge, he said.

“Get involved,” he said. “She should remain on the Virginia Supreme Court.”

Simon discussed a George Mason University student whose debt started at $25,000 but increased to $65,000.

And he wants to add sexual orientation to Fair Housing laws to prohibit discrimination.

Track legislation and review committee agendas prior to a meeting.

“It’s amazing what people can do given the opportunity,” she said. “Medicaid reform has to happen.”

Robert Stewart spoke on behalf of Social Action Linking Together and its legislative priorities, including medicaid expansion that could benefit as many as 400,000 low income uninsured Virginians among other issues.