Girls Inspired and Ready to Lead (GIRL) in empowering women in society. 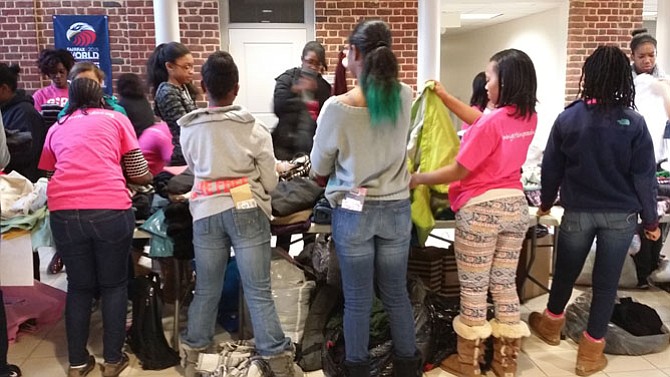 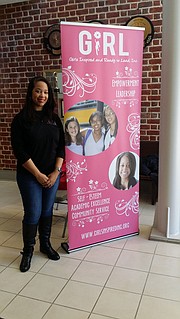 Cheyenne Morrison, a 15-year-old resident of Fairfax was among a group of 30 girls gathered in a conference room at Fairfax City Hall on Monday morning, Jan. 18. As part of a Martin Luther King, Jr. Day of Service Event organized by the City of Fairfax Commission for Women, Girls Inspired and Ready to Lead--a Northern Virginia-based nonprofit organization serving teenage girls--and Women Giving Back--a Northern Virginia based program that provides clothing for women and children in crisis--volunteers, mostly young girls and parents, gathered to collect donations for women and children in shelters.

Before they could sort the donated clothes, the girls were asked to sit in a large room to hear guest speakers from various local organizations and programs discuss their mission to positively impact the role of women and girls in society.

One speaker was Mergie Blassey, a 52-year-old Leesburg resident, who serves as a volunteer coordinator for Women Giving Back. “We send out vouchers once a month, and they go to shelters in the area,” Blassey said. “They [mothers and children] come to our store in Sterling on a Saturday, and in those four hours we see 350-400 mothers and their children.”

THE CLIENTS are eligible to take 50 items of clothing, which Blassey mentioned “seems like a lot until you realize that many of these women have a lot of kids.” Afterwards, she described ways that volunteers in the audience could get involved.

Reminding them that girls in the shelter “also have to go to high school, they have to go to eighth grade, and they don’t have clothes to wear,” Blassey encouraged audience members to help sort out clothes or work with clients in personal shopping.

When asked by a student in the audience if there was a nail spa at the store, Blassey, who looked pleasantly surprised responded, “That’s a fantastic idea!” Encouraged by the feedback, Blassey added, “In fact, we’re doubling space at the store, so we’re going to have room to do that. After they get their clothes, you guys can have a nail party!”

Girls Inspired and Ready to Lead (GIRL) Incorporated was founded in 2010 by Danielle Blunt Craddock, a graduate of Old Dominion University. After completing her master’s degree in higher education-student services, Craddock devoted her time to working with and mentoring youth at the David R. Pinn Community Center in Fairfax, where she recognized the need for great organized program for girls.

“I wanted to empower girls in the community, give them the opportunity to be exposed to future possibilities and mentor them through leadership and community service.” She has also worked at other nonprofit organizations, particularly those tailored towards education, including the United Negro College Fund.

“My full-time career has been in educational nonprofits, so I understand what colleges are looking for in a competitive applicant,” Craddock said. “I’m really catering to the college application.”

Within the past five years, the relatively young organization has worked with local schools such as George Mason University College of Science and corporate partners, such as Hewlett-Packard and US Coastal Guard, to launch summer camps, present career conferences, host workshops, publish a book and perform community service projects.

“In 2014, we had 18 girls in our summer camp for middle school girls,” Craddock said. “We wanted to expose, especially girls of color to career paths in STEM by enabling them to go to chemistry labs, engineering labs.” The fee for each participant was $350 in 2014; the next year however, the organization received a $20,000 grant from Business Women’s Giving Circle, allowing GIRL to reduce the cost of the summer program to $150. Craddock stated that the tuition goes back to program to cover cost of facilities and food.

When asked if she plans on making this role a full time career, Craddock responded “It’s my goal. I’m working on developing structure and corporate partners for funding.”

Cheyenne Morrison, who has been involved in the organization since its beginning first became involved in GIRL when her mother encouraged her to attend its events.

“We started out kind of small,” Morrison said. Having attended the event last year, she decided to return this year with her younger sister to receive community service hours while making valuable use of her free time.

When asked how GIRL has impacted her, she said, “It reminds us girls that we shouldn’t feel inferior to men or back down from something because we’re female.” An aspiring biochemist, Morrison attributes her passion for science to GIRL. “Through GIRL, I was able to get in contact with someone from the research lab, who came to an event to come talk with us.”