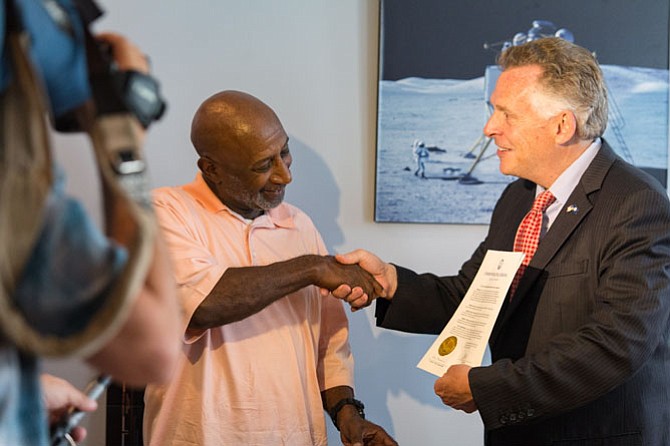 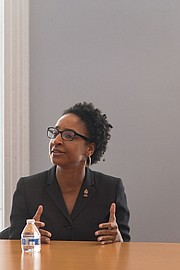 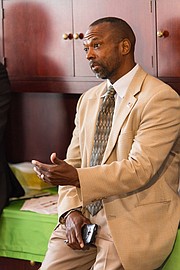 The right to vote is one of the most fundamental American freedoms, and one denied to many Virginians released from prison on felony charges. On June 29, Gov. Terry McAuliffe met in Alexandria’s Northern Virginia Urban League with advocates for the restoration of ex-inmate’s rights. On April 22, McAuliffe signed an executive order that restored voting rights to 206,000 ex-felons. Virginia is one of 10 states that does not automatically restore an ex-felons’ voting rights after his release from prison. At the meeting, ex-convicts from Alexandria and Arlington spoke about the struggles of being released back into society and how the right to vote being taken away impacts their lives.

“Once I paid my debts, I had to wait five years after probation ended to get my voting rights back in 2006,” said Deacon Willie Watts with the Wilson Boulevard Christian Church. “It took six years. I’m proud. I fought through it. Never give up.”

For many ex-inmates, the right to vote is one felt most keenly when it’s lost. Licia White said that before her voting rights were restored she’d never taken an interest in politics.

“We can only press forward,” said White. “I’m excited and ready to vote. Thankful for the opportunity to have my voice heard. It plays a big part in the healing process. I just want to be a part of having a voice.”

The governor and ex-convicts were joined by local civil rights and restoration leaders.

“This is a first step towards battling stigmas,” said Elizabeth Jones Valderrama, executive director of Offender Aid and Restoration (OAR). OAR is an Arlington-based organization that works with offenders and individuals impacted by the criminal justice system. “Restoration brings recidivism rates down,” she said.

Kelvin Manurs is a local civil rights activist and an ex-convict. Manurs leads a 501c group in Arlington called Arm in Arm, which helps returning inmates and veterans work at adjusting back to civilian life. Manurs was both a veteran and an inmate and said the world can be a very intimidating place for both groups. For years, Manurs struggled with drug addictions, particularly to cocaine. However, even after Manurs beat his drug addiction after a 2006 arrest, he says he was still stuck in the drug lifestyle and continued dealing drugs until his arrest in 2009.

Originally, Manurs started Arm in Arm while in prison as a way of connecting with other drug dealers who wanted to escape that lifestyle. But Manurs discovered that many of the issues he faced also impacted other prisoners: low self esteem, low self worth, and negative self images. The group now offers counseling and support services to help deal with those issues. Manurs said that stripping away the right to vote can make many of those already depressed ex-convicts feel like second class citizens. But for many of the younger members of their communities, Manurs says it’s more difficult to explain how big of an impact it is to lose that right.

“I tell young people, ‘what would it be like if someone took away your music? Or, for older people, what if they took away your flower bed?’” said Manurs.

For ex-convicts, the loss of voting rights is particularly painful around election seasons.

“Every time there’s a voting situation, you think about it,” said Robert McNeil, an ex-convict, “but now, we can move forward.”

McNeil described the day he heard the McAuliffe’s announcement on the radio.

“It made me pay attention because there was a possibility that I could vote,” said McNeil. “I’m 62 years old and I’ve never had the opportunity to vote. That day I stood a chance. I wanted to be a part of it. I went into the poll, they accepted me, gave me an application, and the whole process took six or seven minutes. I walk with a cane but I was ready to dance.”

McAuliffe currently faces a lawsuit from political opponents who allege that McAuliffe abused his executive privilege in his voting rights restoration.

“Every civil rights struggle is hard work,” said McAuliffe, “that doesn’t mean we don’t do it.”