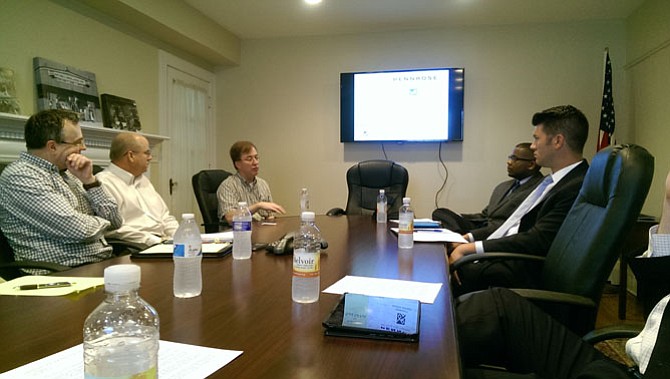 After decades of meetings and stalled redevelopment, the most recent plan for making over North Hill’s 33-acre vacant site at the intersection of Route 1 and Dart Drive has gone the furthest.

On June 13, the development team CHPPENN (Community Housing Partners and Pennrose) submitted its rezoning application with Fairfax County. The proposal calls for 278 new multifamily rental units and 195 market-rate townhomes to be built where manufactured homes, or trailers, once occupied space.

On June 13, the development team CHPPENN (Community Housing Partners and Pennrose) submitted its rezoning application with Fairfax County. The proposal calls for 278 new multifamily rental units and 195 market-rate townhomes to be built where manufactured homes, or trailers, once occupied space.

Now that the rezoning application has been submitted, the project team is hoping to make a Planning Commission meeting by January 2017 and for the proposal to come before the Board of Supervisors by the following month.

If they hit that target, construction could start by late 2017, Wells said, and then take between two and three years to complete.

But with heavy vegetation, steep elevation and marine clay throughout the site, Wells called the project “a monster to tackle,” which could affect the timeline.

In addition to the housing, which would include 10 percent set aside for low-income residents, the rest of the site space would be taken up by a park. That would be developed by Fairfax County.

One factor helping move this plan forward further than in the past is CHPPENN’s expectation they can obtain a nine percent housing tax credit for 2017 rather than the less competitive four percent credit. The difference would mean about $7.5 million.

“It’s been too long, a long time coming,” Krizek said. “This deal is for very mixed income — it’s not creating too concentrated an area of low income residents.”

Krizek said students in the Residences at North Hill Park would attend Bucknell Elementary School, which is undergoing its own revitalization.

“Our schools are in crisis already,” she said, “and we’d have more low income students requiring more services. But it provides opportunities also. You have to have the opportunities in place, and need to have the jobs in place.”

Supervisors Jeff McKay (D-Lee) and Dan Storck (D-Mount Vernon) have also voiced concerns over the impact of the residences on local schools.