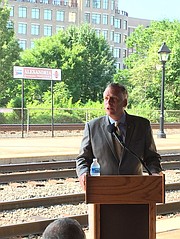 The Atlantic Gateway is underway. Gov. Terry McAuliffe discussed the details of the $1.4 billion plan to reform regional road and rail projects at Alexandria’s Union Station on July 8. For Northern Virginia, the program means road expansions and more express lanes, but for Arlington a big piece of the proposed improvements could be the rebuilding of the Long Bridge parallel to the 14th Street Bridge.

According to Nick Donohue, Deputy Secretary of Transportation, the plan is to expand the rail access from two tracks to four. Currently, the Virginia Railway Express (VRE) has to compete for rail access with other freight lines moving through D.C. and Donohue said the rail capacity is at its maximum usage.

“This will improve reliability and it adds capacity,” said Donohue.

But the Long Bridge project is the only one of the listed improvements that is only partially funded. The project is a partnership with Washington D.C., which still has to perform an environmental study on the project before it will commit funding.

“We want to be able to advance the Virginia side so we’ll be ready when D.C. is,” said Jennifer Mitchell, director of the Virginia Department of Rail and Public Transportation.

Arlington’s political leaders in attendance at the meeting expressed enthusiastic support for the project and for the Long Bridge improvement.

“I’m excited that it’s not just roads improved,” said state Sen. Adam Ebbin. “I’m happy about the multimodal improvements. The VRE is an important economic driver for the region.”

“We’re thrilled,” said Arlington County Board member Katie Cristol. “This is a tremendous opportunity for Arlington.”