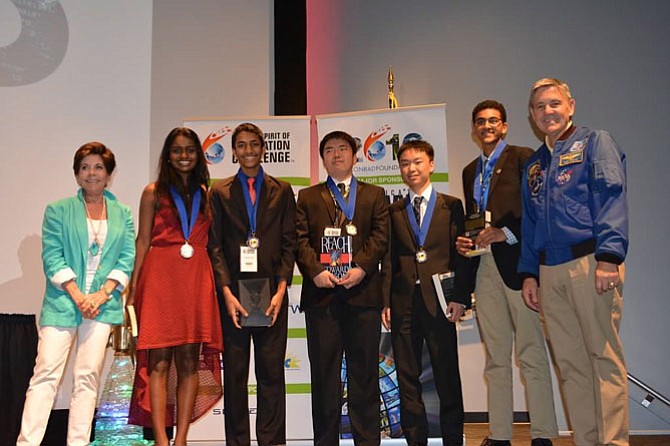 The Conrad Spirit of Innovation Challenge began in August 2015 with more than 500 students from 16 countries creating concepts, products and services to help humanity. More than 90 teams advanced to the Finals of the Challenge, hosted at the Kennedy Space Center in Florida. The winning team was Team Kosmos, whose members -- all from Herndon -- include Rahul Rajan, Kavya Kopparapu, Alex Peng, Justin Zhang and Naman Singh. All team members attend the Thomas Jefferson School for Science and Technology except Singh, who attends Westfield High School.

Out of the ninety participating teams, Team Kosmos was awarded first place in the CyberTechnoglogy and Security category, and was selected as Pete Conrad Scholars. The product Team Kosmos proposed for the category competition was “MediKey,” an app that would allow EMT personnel to have access to patients’ current medical information with just the touch of a button. The proposed app allows an EMT to simply touch their phone to the patient’s to begin a data transfer via near field communication through a public-private key system, receiving information regarding allergies and current medications.

Nancy Conrad founded the Conrad Spirit of Innovation Challenge in honor of her late husband and his passion for innovation and entrepreneurship. Charles “Pete” Conrad Jr., Apollo 12 astronaut, attended Princeton University and in November 1969, became the third man to walk on the Moon as commander of Apollo 12. He later founded four companies purposed towards the commercialization of space travel.

“The Conrad Spirit of Innovation Challenge brings together a dynamic community of innovators and entrepreneurs driving a collaborative movement to develop extraordinary and viable solutions to benefit our world in one of four areas: Aerospace & Aviation, Cyber Technology & Security, Energy & Environment, and Health & Nutrition,” said Rajan Velayudhan whose son is a member of Team Kosmos.

Aerospace & Aviation details the human effort in the science, engineering and business of flying in the Earth’s atmosphere and surrounding space. Participants must research, design, manufacture, operate or maintain aircraft in the area’s competition. The Cyber Technology & Security area allows students to apply information in the field to computing devices and networks and innovate with computer-based equipment, information and services. The Energy and Environment area of competition includes all fields that study the human use of natural resources and the subsequent impact of human activity and growth on the environment. The final category, Health & Nutrition, encompasses all fields regarding the human body, behavior, wellness and medicine.

Within each category, the innovative and entrepreneurial students attempt to develop viable solutions to benefit the world. Each team competes also to be named Pete Conrad Scholars as well as for seed grants, prizes, scholarships, patent support and real business opportunities.