329 N. Washington St. is a quintessential Old Town mansion. It’s a historic, four-story home facing the George Washington Parkway on one side and the the cobblestone Princess Street on the other. Unlike most Old Town homes, however, the property is currently at the heart of a lawsuit against the City Council with allegations of corruption within City Hall.

The case began on May 31 and is expected to last a week. The lawsuit centers around two counts against the City Council: that approval of the application was unreasonable, arbitrary, and capricious, and that the City Council had engaged in illegal spot zoning. 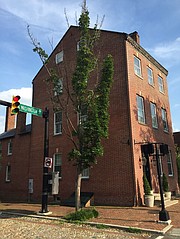 329 N. Washington Street, rezoned by the City Council in 2014 from a residential property to commercial-downtown.

“The city has bent or broke its own rules.”

— Bryan Wilson, attorney for the nearby residents

“It may not have been the decision the plaintiffs would have made, but it was a decision supported by the evidence.”

“This is a case about whether or not the government is required to follow its own rules,” said Bryan Wilson, the attorney for the neighbors. “The city bent or broke its own rules to pass this application.”

To prove the first count, Wilson will have to prove to Judge William Shaw that the city did not fairly consider the impact of the restaurant on the neighborhood in deference to the applicant’s family’s political connections. The root cause of the corruption allegations is that Margaret Ticer Janowsky is the daughter of former Alexandria City Councilor, Mayor, and State Sen. Patricia “Patsy” Ticer. Though retired, Ticer still has an active role as an endorser and campaign contributor to city politics. Ticer was among the first and most prominent endorsements of Mayor Allison Silberberg during last year’s mayoral election, an endorsement displayed on campaign signs.

At the Planning Commission meeting in 2014, Ticer sat one row behind city staff, receiving special recognition by the Planning Commission and given a round of applause before the resturaunt discussion began. At the City Council meeting, while Ticer was not formally recognized, she sat at the same spot behind the staff and went into the publicly accessible City Council workroom with then Mayor William Euille and City Council members Redella “Del” Pepper, Justin Wilson and Paul Smedberg.

But Amy Miller, counsel for the city, said that each of the issues had been carefully considered by the City Council, with documented evidence of debate and restrictions on La Bergerie even greater than those proposed by staff or at the Planning Commission.

During the City Council’s discussion, Miller identified several conditions, like a noise limitation and a further restriction on parking at the site, that proved the City Council had recognized neighborhood concerns.

“It may not have been the decision the plaintiffs would have made, but it was a decision supported by the evidence,” said Miller.

But to refuse the second count, that the city illegally spot-zoned, Miller will have to prove that the zoning did not solely serve the applicant, meaning a public benefit associated with rezoning 329 N. Washington St. must be identified. In the first day of the trial, the only potential public benefit proposed by Miller was that the historic home would be more accessible to the public as a restaurant than as a private home.

As a property case, the La Bergerie case was document-heavy, with most of the first day centering around debates over the admission of certain documents as evidence. Wilson would put forward one several inches thick binder as evidence, with attorneys for the city and the applicant immediately arguing parts of the evidence contained hearsay. Frequently, city counsel Kevin Daniel and Wilson argued over whether or not city staff could be considered agents of the City Council, which would make their commentary admissible as evidence of corruption. Wilson argued it was hypocritical for the city to both rely on staff in its defense and then claim no association.

Afterwards, the defense called local residents to the stand, each of whom testified that, despite increases on their city assessed real estate property value, their homes would be severely detrimental by the site’s conversion into a restaurant.

“I was horrified,” said Shirley Rettig, an 89-year-old resident whose lived in a building 20 feet from the property since 1959. “How could you not hear 50 people talking just 20 feet from your house. Sometimes we can hear events at the Lee-Fendall house a block away … I resent that I’ve been living under a dark cloud for two years, waiting for this thing to happen.”

“The thought of living near a restaurant is disgusting,” said Ellen Moser, whose lived near the property since 2004 and moved to her home specifically to be away from the restaurants and retail of King Street. “I don’t want to live near the smells [or] the sounds of parties. That would be terrible.”

No other properties on the block are being used as retail spaces, but under cross-examination from Andy Burcher, attorney for Janow LLC, Moser did note that her home is zoned commercial downtown, the same zoning at the center of the 329 N. Washington St.

Ronald Rigby, one of the local residents who’d been active in the opposition to the restaurant, was quoted by Millar at the beginning of the case as having expressed his disappointment at a letter asking City Council members to recuse themselves from the vote. At the time, Rigby said he had full confidence that the City Council was capable of making an impartial decision. But by the time Rigby was called to the stand, his mind had changed.

“I do not believe that anymore,” said Rigby of his confidence in the City Council’s impartiality. Rigby said information that had come to light since the vote, like the City Council member’s private meetings with the applicants, had caused him to question his belief in the council. “Any rational person would not have supported this application.”

The trial is expected to continue until early next week, with the next few days seeing testimonies from the current Mayor Silberberg, members of City Council, and former Mayor Euille.