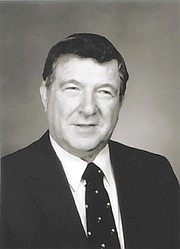 Nicholas Beltrante, 88, is a retired D.C. homicide detective, a resident of Mount Vernon, and founder of the Citizens Coalition for Police Accountability.

Awards: Named one of the top 25 private investigators in the 20th century by the National Association of Investigator Specialists

Military Service: WW II Navy Corpsman assigned to U.S. Marine combat units and aboard the hospital ship USS Consolation which served in the South Pacific. Beltrante was 17 at the time he dropped out of school and enlisted in the U.S. Navy.

The Police Practices Review Commission’s recommendation to create a Citizens Police Oversight Board may be in trouble, according to Nick Beltrante, executive director of the Citizens Coalition for Police Accountability (CCPA).

Beltrante and his organization has pushed for its creation for the past six years. Beltrante worries that the police administration and police union have never embraced the citizens oversight board concept and may see the independent police puditor recommendation as a safer bet for their interests, and that the county doesn’t need both.

The Public Safety Committee will meet on July 19, 1 p.m., at the Fairfax County Government Center, when citizen oversight and the police auditor recommendation will be reviewed.

Board of Supervisors Chairman Sharon Bulova formed the Ad Hoc Police Practices Review Commission more than a year ago to study and come up with improvements in police policies and procedures. After seven months of public hearings and deliberations, the commission submitted a final report to the supervisors. The Board of Supervisors is now in the process of debating the merits of the recommendations and, where agreement is reached, it is directing the police and county staff to implement the police reforms.

Beltrante, who was a member of the commission, is anxiously awaiting the Board of Supervisors’ upcoming July 19 Public Safety Committee meeting in which the Independent Citizens Oversight Board proposal will be considered by the board for the third time.

The first time the board considered such a proposal, and rejected it, was in 1979 when the Gum Springs Civic Association urged its adoption. Beltrante’s CCPA proposed its version of the citizens oversight board five years ago, and it too was rejected. For Beltrante, “It’s been a frustrating experience.”

Beltrante’s attempt to achieve improved Fairfax County police accountability began in 2010 primarily because of a police shooting resulting in the death of David Masters, a former Green Beret soldier who served in Vietnam. His offense? Masters allegedly committed petty larceny; he took a flowering plant from a Route 1 retail store without paying for it. After a brief car chase by the police on Route 1, his refusal to stop his car eventually ended on a service road when three armed police offciers surrounded his car at the corner of Fort Hunt Road and Route 1. When Masters continued not to obey police commands, it resulted in one of the officers shooting him in the back and killing him while he was sitting in his car. No gun was found in his car and he did not own a gun.

In response primarily to this and other incidents, Beltrante formed CCPA which publicized citizen complaints of police misconduct, lack of transparency, and publicized numerous incidents past and present of the police shooting unarmed citizens. Still, his public relations campaign came to nothing.

Beltrante also contacted the federal FBI citing the police misconduct as a violation of civil rights statutes, and called on them to investigate the police in Fairfax County. Still, there was no response and no action.

“Then two events took place that changed everything,” Beltrante said: The police shooting death of John Geer, and the intervention of Iowa’s U.S. Sen. Charles Grassley in order to break up a legal logjam and pursue the shooting death case of Geer. The police officer who shot Geer was the first Fairfax County police officer in over half a century who the current Commonwealth Attorney Ray Morrogh said committed a crime. The entry of Grassley, plus the entry into the debate of “Cop Block,” the citizen advocacy group, created the conditions that caused the wheels of justice to finally respond to the Geer shooting. Shortly thereafter Bulova, with the support of the Board of Supervisors, acted to form the Ad Hoc Police Practices Review Commission.

That email was revealed when Cop Block filed a Freedom of Information Act (FOIA) request for internal correspondence of the Board of Supervisors.

Today, Beltrante worries that the police union likely has not conceded the fight against forming a citizen oversight board. Furthermore, the recommendation to create an Independent Police Auditor may cause the Public Safety Committee to bend to police union lobbying and influence the board to adopt the auditor recommendation and delay the formation of an outside citizens board. The auditor position will be taken up by the board’s public safety committee at the same time as the citizens oversight board recommendation on July 19. The Beltrante concern is pure conjecture; there is no evidence that there’s a plan to kill the oversight board. “From my experience,” he said, “the police bureaucracy and the police union worry more about a citizen oversight board looking over their shoulder than any of the other reform proposals. As a former career member of the police department in the District of Columbia I am puzzled [about] what do the Fairfax Police leadership have to worry about? I think a citizens oversight board can be a valuable tool to look after the police; especially if the concern or complaint by a citizen or group is not justified. “

Those who serve with Beltrante on the CCPA admire his focus.

John Smucker, president of CCPA, said, “He is a fine person; he is totally committed to the issue of improving the Fairfax County Police. Nick always has the best interests of the citizens when he decides on a course of action.”

Annie Whitehead, secretary of CCPA, said, “Nick is very determined, and steadfast in his efforts to protect the interests of citizens. At the same time, he has a keen interest in preserving the integrity of the police profession. For a man of his age to take on the large task of police reform in Fairfax County, in past years completely alone, is truly amazing. He is as tough as nails but with a heart of gold. We should all be thankful for his service to the community.”

Asked his opinion about the Police Practices Review Commission’s recommendations, Beltrante said, “The creation of the commission and its recommendations was a terrific thing, going beyond my group’s initial recommendations. We have to thank Senator Grassley and, ultimately, the leadership of chairwoman Bulova and members of the Board of Supervisors for that. The use of force training, mental health sensitivity training, transparency, cameras in the field, and other commission recommendations are all very good and long overdue. A Citizen Oversight Board would be the crown jewel recommendation. But let’s not kid ourselves, there is still more work to be done if police accountability is to be achieved. For, without a change in the Virginia Freedom of Information Act’s exemption for the police, the citizens board and the public will not have access to the information they need to study and make recommendations on police incidents.”

Creation of a Fairfax County citizens police oversight board would mean that Fairfax County would join more than 150 other Citizen Police Oversight Boards in the metro area and nationally.

Beltrante, who will be 89 years old in June, began in 2010 the job of pressing for something no one thought was needed. Notwithstanding his concerns he may finally realize police reforms that he began lobbying for these past years.

“My biggest disappointment is the slow progress and stonewalling on the long overdue police reforms came too late to prevent police misconduct that caused deaths and disability,” Beltrante said, “Let’s never forget that since 2006 at least the following unarmed citizens were shot and killed or permanently disabled by Fairfax County Police: David Masters, Dr. Salvatore Culosi, Hailu Brook, Ian Smith, Nicholas A. Kaelber, James Bryant, and John Geer, among others. Without police incident reports which continue to not be available to the public we will never know if the police actions on these men was justified.”

Since 2006 as a result of alleged police misconduct approximately $5 million in out of court settlements have been paid by the Fairfax County government to victims’ families. The Board of Supervisors’ Public Safety Committee, chaired by Supervisor John Cook, is scheduled to meet on the police reform recommendations three more times this year: July 19 at 1 p.m.; in the fall; and again in December. The meetings are held in the Government Center, Rooms 9/10, and they are open to the public.