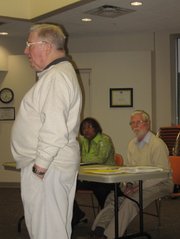 Photo by Gerald A. Fill

Nicholas Beltrante, executive director, CCPA, addresses the organization at its May 14, meeting. In the background and seated is the president of the CCPA, the Rev. John Reed Smucker and the secretary/treasurer of the board, Annie Whitehead.

During the final meeting of the Citizens Coalition for Police Accountability before summer recess, Executive Director Nicholas Beltrante discussed a letter he sent to Sharon Bulova, chairwoman of the Board of Supervisors, asking that the new police chief be someone who supports the creation of a citizen police oversight board, and is flexible in the use of the Freedom of Information Act instead of invoking an automatic blanket exemption available to police on all investigations.

Currently, the supervisors are conducting a search to replace former Police Chief David Rohrer, who was promoted to a new position as deputy county executive for public safety. In the letter, Beltrante called on Bulova and the board to include specific qualifications the candidates should possess in evaluating the selection of the new police chief. The letter outlined the following qualifications:

Beltrante closed his letter to Bulova with this question: “Has the police department or the Board of Supervisors formed a citizen review panel to review and comment on the nominee’s qualifications?”

The CCPA was formed approximately three years ago and registered as a non-profit Virginia corporation following the shooting death by Fairfax County police of David Masters who allegedly took flowers from a Route 1 store and drove away in his car until he was stopped by traffic and the police who pursued him. He was shot in the back while sitting in his car at the corner of Fort Hunt Road and Route 1 by one of the police officers who believed Masters was reaching for a gun. Masters, a Vietnam veteran, was unarmed. Because of the blanket police exemption provided by the Virginia Freedom of Information Act, the police incident report was never released. Therefore the circumstances of the shooting incident was never made available to the public. The Commonwealth Attorney determined that the police officer who shot Masters was not negligent in his duties and was not prosecuted.

Since then the CCPA has focused on other shooting deaths by police of unarmed citizens. No police incident reports were made available and no wrongdoing by Fairfax police has been found in any of the cases. The CCPA has received support for its efforts to establish a Fairfax County citizen police oversight panel from several local and statewide organizations.

Following the shooting death of Masters, the Board of Supervisors asked the county executive and the police chief to evaluate the CCPA proposal to create a citizen police oversight panel. Both recommended against its creation and recommended that citizen complaints of alleged police misconduct be investigated by the county’s independent auditor. The supervisors accepted their recommendation.