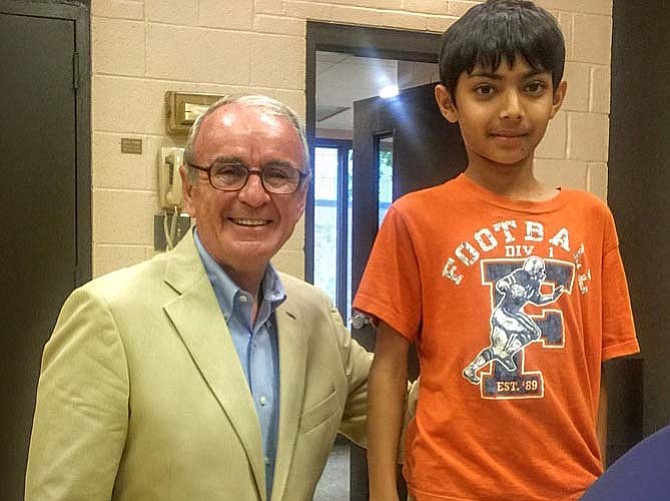 McLean Citizens Association wanted to honor the designer of its new website for a Teen Character Award at McLean Day. But Shray Gupta, a student at Lemon Road Elementary, didn’t qualify; he is not yet a teenager.

Instead, MCA passed a resolution at its meeting on June 1, 2016 at the McLean Community Center to honor the nine-year-old for his service to the organization “and the entire McLean-area community.”

“Mr. Gupta created the new MCA website at no cost to MCA,” according to the resolution, and “the revised website was ultimately accepted by the entire MCA Board of Directors without a single edit.”

“It really is quite remarkable,” said Jeff Barnett, MCA president.

ONE WEEK BEFORE, McLean Citizens Association held its 2016 General Membership meeting, May 23.

“I told Jeff if we served wine and cheese we would meet our quorum,” said Glenn Harris, MCA first vice president.

There was cause for cheer.

“We are proud to be a part of the community efforts that make McLean a wonderful place to live, work, shop and raise families,” said Burgoyne.

The fire department was the recipient of the first grant McLean Community Foundation offered 35 years ago. This year, MCF approved a $25,000 grant to the fire department to support its purchase of a new vehicle.

SEVEN COMMITTEE CHAIRS or co-chairs spoke of the importance and impact of each committee.

Meetings are held throughout the month, many at the McLean Community Center. Members and the public are always encouraged to attend.

“Is the county spending the correct amount of money on these… and is the county doing it efficiently, is it cost effective. Are we getting value for the money we are spending,” he said.

Another question, said Stein, “Where does the money come from for God’s sake?”

This spring, MCA passed a resolution to urge the county to diversify its revenue source.

Tuesday, June 7, The Board of Supervisors will consider a proposition to take a potential county meals tax to the voters in a General Election referendum in November.

$3.2 BILLION surrounding 19 major rezonings in Tysons that will be implemented in the next 15 to 20 years is a focus of the Tysons Liaison Committee, chaired by Rob Jackson.

McLean Citizens Association not only focuses on McLean, it focuses on any issue outside of McLean that impacts McLean and its citizens.

“We speak up as necessary,” said Mark Zetts, who also heads the Planning and Zoning committee that addresses thoroughly all rezonings and land-use issues in McLean.

The new Comprehensive Plan for Tysons was approved in 2010,” he said, “and Tysons Liaison Committee submitted voluminous comments on this plan.”

With proffers, now in question with new state law, developers have proffered two new fire stations, a new library, community center, six athletic fields, said Zetts. “The thing that has not been proffered yet is a new police station. The [Tysons] comp plan calls for it in Tysons by 2025.”

“We want a police presence,” he said.

Tysons is in the same police district as McLean, said Smaldore. “If the majority of calls for service are going in that direction the question is what happens back in this direction? We’re very concerned about this,” he said.

Both committees advocate for a police station with visible storefront presence at Tysons for the police department.

With Supervisor Foust and the county, MCA is co-sponsoring a Senior Safety Program on June 15, from 10 a.m. to noon in the Dranesville District Community, 1437 Balls Hill Road, with topics from Zika preparedness, scams targeting older adults, Hazmat Community Right-to-Know Act, Project Life-Saver and Next Generation 9-1-1.

“The biggest thing we can do is advocacy,” said Smaldore.

THE EDUCATION and YOUTH committee holds an annual conversation with Fairfax County Superintendent of Schools Dr. Karen Garza each year.

“This was very well attended, but not so attended that people couldn’t get their questions answered,” said MCA’s Liz Baird.

For 19 years, the committee has recognized local students for outstanding character; eight McLean students were recognized at McLean Day this year.

The committee teams up with the budget committee because there is so much overlap, said Baird.

“We are currently about to launch a request to ask for more information from Fairfax County Public Schools so that we understand the basis for different salaries, for differing average salaries of teachers across the different schools within FCPS. Our focus here is ensuring that McLean students and McLean teachers get their fair share of resources.”

Class sizes in McLean is a huge issue that MCA tracks vigilantly.

“This exemplified what the MCA can do, bringing together all actors in the community and having a civil discussion,” said Kohlenberger. “In the aftermath of an unfortunate incident where some trees were slated to be saved but were taken out in the dead of the night, the NVBIA responded forcibly on that builder and has bought into the idea that policies need to be followed.”

“To get the industry to come talk with us and work with us is a big deal,” said Foust.

Kohlenberger updated members about the Dead Run Stream Restoration project that MCA has been been part of for a number of years.

“Due to public feedback, Supervisor Foust convened a stream team about 18 months ago,” he said. “That brought together people from county, MCA and local residents to discuss and finetune the project.”

Tree loss has been reduced by more than 30 percent from 2013 to the plan they are presenting today, said Kohlenberger, and the county says it will look at the efforts of the stream team as a model to use for other restoration projects throughout the county in the future.

Chair Merrily Pierce has spearheaded years-long involvement with the Churchill Road Eco-project, said Kohlenberger, and students get involved with conducting tree inventory, removing invasives and involving McLean Project for the Arts to “get people to think about the intersection of science and art.”