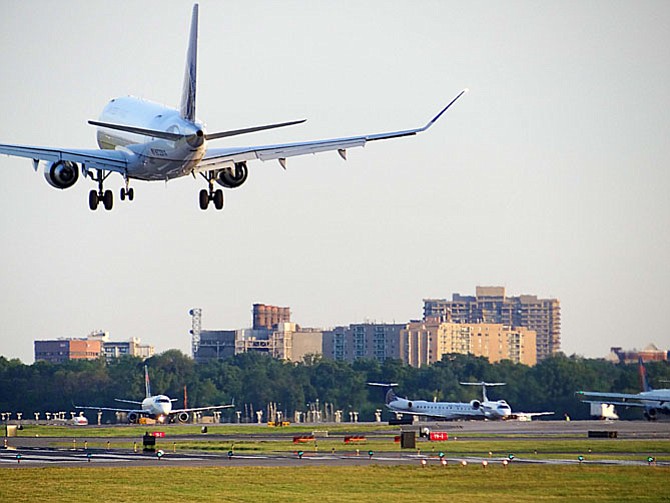 The irony of some struggling to hear over the sound of planes taxiing just outside the packed lounge at Reagan Washington National Airport’s historic Terminal A wasn’t lost on the audience of more than 300. 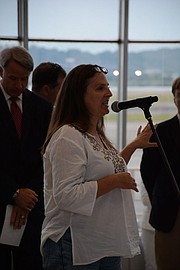 Laura Quirk has lived in the Mount Vernon area of Alexandria for four decades and said it’s impossible to even shout over the deafening noise at her Hollin Hall Village home.

At a meeting convened for community members to discuss airplane noise complaints, the irony of some struggling to hear over the sound of planes taxiing just outside the packed lounge at Reagan Washington National Airport’s historic Terminal A wasn’t lost on the audience of more than 300.

“This is quiet compared to what we deal with at home,” said Laura Quirk, who’s lived in the Mount Vernon area of Alexandria for four decades. She used to live in Belle Haven and now resides in Hollin Hall Village.

“I’m accustomed to some noise,” she said. “But this is deafening. You can’t shout over the noise. It shakes my wall, glasses get knocked over.”

Quirk was among numerous speakers at a meeting convened by U.S. Rep. Don Beyer (D-8) on Monday night, June 27, to discuss changes that have been made in flight frequency and routing that impact various communities in Alexandria.

In the last year, morning and evening flights have increased, coinciding with the airport activating a new air traffic control program called Next Generation Air Transportation System, or “NextGen.”

Citizens as well as local elected officials including Alexandria Mayor Allison Silberberg and Fairfax County Supervisor Dan Storck (D-Mount Vernon) said the changes in flights and patterns have drastically increased airplane noise over and around the Potomac River, and that community members weren’t involved in the process whatsoever.

“It’s about engaging the community before you make changes,” Storck said in an interview after the meeting. “It’s undemocratic to not do so. This has gone on too long. The noise is unacceptable. Nobody’s talked to the community about it at all.”

That was the overwhelming sentiment of citizen speakers as well as the occasional outburst from audience members.

People complained of not being able to sit on their deck or work in their yard without battling acute noise pollution. Others referenced Hollin Meadows Elementary School, which after the flights change they said now has planes passing over every three minutes.

One community member asked if an environmental impact study had been done before the flight changes were made.

Elizabeth Lynn Ray, vice president of Support Services Air Traffic Organization for the Federal Aviation Administration, said that only an “environmental assessment” was required, which they completed. The assessment did not call for canvassing communities and interviewing residents, she said.

In her comments, Ray referenced the Reagan National Airport Community Working Group that was established to give community members a say with regards to aircraft noise south of the airport.

Applause went up when Ray said the working group is considering solutions.

“We continue to work through the working group,” she said, “to put airplanes over water longer to the north and south sides.”

Ray gave the estimate of nine to 12 months for any changes to occur, due to the length of process design.

“People who don’t live under this don’t understand,” he continued. “It’s really ridiculous. It was foisted upon us.”

Krizek praised the Mount Vernon community for their calls that the flight traffic not simply be “pushed down to someone else’s community.” “They’re victims of noise, they don’t want anyone else to be victims.”

Among other ideas, Krizek wondered about the possibility of alternating days or weeks of flight patterns to give residents at least some relief from the noise pollution.

State Sen. Adam Ebbin (D-30) said his and other elected officials’ job is to keep informing the public of the process, of the federal government making changes that trickle down to the community members — or changes that sound like “planes falling out of the sky at two in the morning,” as one citizen put it.

“Tonight shows not just how big but how engaged this community is,” Ebbin said.

Though Beyer’s staff said he wasn’t able to attend the meeting due to a scheduling conflict, Ebbin said the fact that he put the event together shows his concern over the issue.

For information on how to submit a noise complaint, visit www.flyreagan.com/dca/reagan-national-submit-noise-complaint.