On the Trail: Earning My Mountain Laurels
Votes

On the Trail: Earning My Mountain Laurels 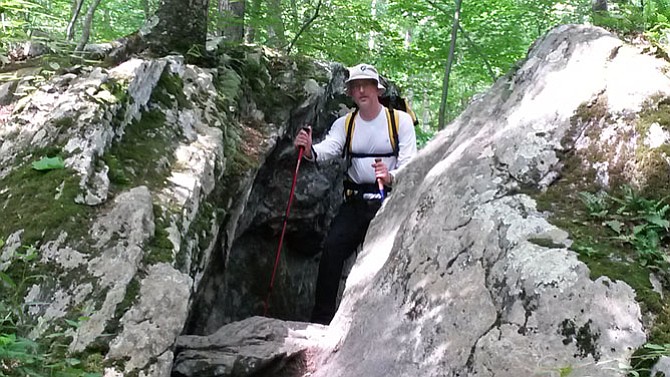 The author transverses a tight pass. Just Bryan (trail name) said, "If they can take you the hard way, they nearly always will …" of the trail managers. Photo by George Griffin

"If we find you collapsed beside the trail, George, we will pray over you."

I laughed, but Tex wasn't kidding. He saw I was hurting, and along with his wife Beverly, knew what it was to hurt along the Appalachian Trail. 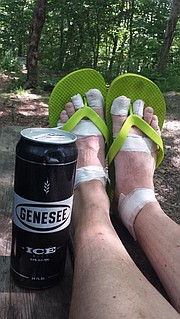 The author’s feet at camp, with a beer hauled up from a deli stop that day.

An elderly couple from Dallas, they hiked slowly but consistently, for weeks. Purposefully, but burdened with heavy packs and hampered by Bev's ankle — injured long before their mission on the Appalachian Trail, on they went. When we said goodbye that morning, that offer of intervention was, I felt, sincere and I might need it. I also knew I would see them later, hours behind me but before nightfall, at the next shelter. These two were no-quitters, and by my third day on the trail I was genuinely impressed.

My friend Just Bryan — that’s his trail name — invited me to join him on a small portion of his trek across half of the Appalachian Trail's nearly 2,200 miles. He began Mother's Day at Harper's Ferry, W.Va. and was determined to reach one end, Mt. Katahdin, Maine, another 750 miles north of where I joined him in southeastern New York State. 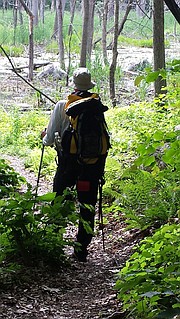 The author as seen from behind.

By now a baptized-by-trail "LASHer" under any interpretation, Just Bryan had hiked more than 350 miles. "Lasher" stands for "Long Ass Section Hiker." That’s one degree less hardcore perhaps than the "Through Hikers" who dedicate their full time and fuller stamina to the complete distance of the Appalachian Trail, from Maine to Georgia, or vice versa, in one fantastic march. No small feat his, if he can manage — besting over 1,100 miles of trail, including the trail's second tallest peak, Mt. Washington in New Hampshire, before summer's end.

My end appeared much closer. Three days of 10 mile up-and-down, hardscrabble hikes had ruined my feet and I openly questioned whether I could do the eight miles tomorrow to reach a highway and egress to the motor lodge, a shower, and beers.

At the shelter that night, I gently removed the boots I bought used on Craigslist, slipped on my "camp shoes" (cheap green flip-flops) and hung my hammock. Just Bryan lit a fire. He had already unpacked and claimed his space within the shelter. I didn’t understand it, but to him this was paramount.

Shelters punctuate the Appalachian Trail, but can be far apart, 20 miles or more. Long stretches of trail offer no shelters at all. Threadbare, the three-sided structures of wood are a foot or so above the ground and open to the elements on one side with an overhanging roof. Roughing it for sure, but for hikers who don’t want to haul and pitch a tent, shelters are critical. Just Bryan shaped his hiking plans on securing himself a space each night — most shelters sleep only six — so he hiked with fervor. When I complained that this pace kept me from enjoying the woods as fully as I hoped, he said dryly, "This is not camping, dude, it’s hiking."

The author’s sleeping setup, hammock bug net and tarp; the author is not for shelters.

As the afternoon faded into evening, I understood. More and more hikers came to stop for the night. Shelter space tightened. Tents popped up, hammocks were hung. People who said goodbye hours earlier reunited, strangers became temporary friends. Shelters offer more than just weather cover and water — they are a social center that breaks the lonely miles of trail. At peak season they hum with interesting folk.

Tuna Roll — his trail name — is an Iraq War vet. Maine or bust for him. Many former service members appear on the Appalachian Trail this time of year, Afghanistan vets too. Some know both wars. They huddle together at the shelters like some kind of self-help group, trading stories. I think the trail offers its own kind of therapy; these guys pack light, move fast, push on through pain. From the moment he arrived to the time he went down for the night, Tuna Roll chugged Coors tallboys he had hiked up the mountain that afternoon.

While he spoke very little with us, Tuna livened up when a mother and teen daughter team of redheads emerged through the forest. He had seen them before, but they were new to us. I wished Tuna had kept quiet, for he indulged in use of the "f" word, sentence, phrase and thought. When he hushed, I found out they were from Burbank, Calif., on the trail since school ended and hoping to make it from the Delaware Water Gap to New Hampshire. The night before, camped in a state park on the trail, their food and toiletries were stolen as they slept. I gave them a lot from my overburdened pack.

The Morgan Stewart shelter on the trail: Just Bryan (trail name) is seen in the foreground with the fire. Shelters are meant to accommodate six sleeping adults … comfortably — provided one has a sleeping bag and mat.

Good — because I brought too much, and was feeling it. My shoulders ached, my hips, where most of the pack weight is borne if you are doing it right, were chafed and bruising. My feet were a mix of blisters, cuts, moleskin, tape, and pain. The first night, I jettisoned a lantern, some Gold Bond, and a book a neighbor lent me. He puts his name and address on stickers in his books so I left a note and $3 for whoever found it, asking it be returned. (Sorry, Conley.)

The hiking, however, was beautiful. Rich oak-heath forest of trees old, new, and reborn splayed out uphill and down and when we peaked, after a long, torturous, switchback ascent, I was healed by an expansive Hudson Valley view, or uplifted, unexpectedly washed in rich, white mountain laurels. Spectacular in full bloom. Despite the lingering pain, I am hooked. I want to LASH again, slow down, perhaps take my son and do the length of the Appalachian Trail through Virginia (550 miles, its longest single state stretch) which many say is its most scenic.

If I do, I hope to find Tex and Bev again, for an update, good news and celebration. Early in their trek north, word came from home — a young granddaughter named Harmony had been diagnosed with lymphoma. Instinct said quit and return — their daughter said go on. Instead they wiped tears, shaved their heads and continued, hiking and praying, and asking all their fellow trekkers to sign the cards they send back to Harmony regularly from the trail.

George Griffin, of Mount Vernon, is a reformed television news producer now working on his fatherhood skills. He's not much of an outdoorsman.