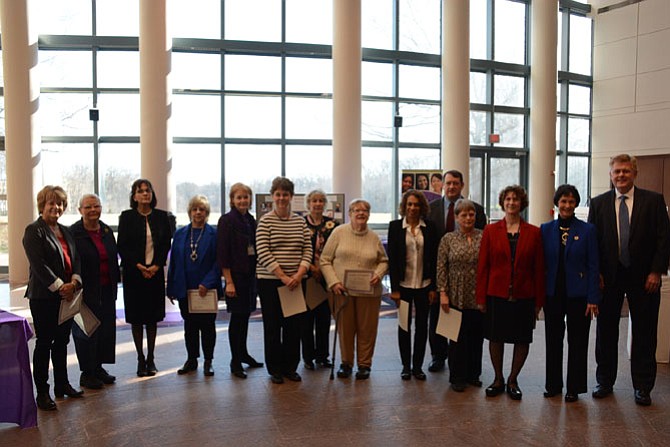 Fairfax County Commission for Women honorees were joined by Supervisors Pat Herrity (R-Springfield) and John Cook (R-Braddock) prior to the Board of Supervisors regular business meeting. Photo by Tim Peterson. 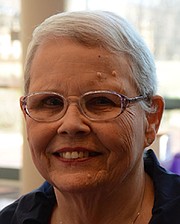 Edwyna Wingo works as a public health Nurse II with the Department of Public Health.

Edwyna Wingo of the Chantilly area began her career with Fairfax County as a nurse in the Health Department on Sep. 1, 1965 and worked her last full day Oct. 1, 2011.

Wingo graduated from the University of Virginia nursing school in 1964 and decided she didn’t much care for rotating and night shifts. Looking for a more regular schedule, she found work in “Home Health,” providing health services for individuals outside the hospital.

“The bug of public health really stuck,” she said. “And I was on the cutting edge of public health back then. Home visits, community clinics, I did it all. And I never gave up on my love of patient care.”

Wingo now works as part-time on special projects for the Fairfax County Health Department, including a car seat program for families whose income is low enough to make them eligible. She started with the project four years ago and said to date thousands of car seats have been given out.

Wingo is the longest-tenured of 12 women honored by the Fairfax County Commission for Women on March 1, Super Tuesday, at the Government Center prior to the Board of Supervisors regular meeting.

“I was absolutely floored when I got the email,” Wingo said. “Fairfax County has been very dear to me. I’ve had opportunities in Fairfax County with the Health Department.”

Board of Supervisors Chairman Sharon Bulova spoke to the group before moving into the Board’s auditorium to begin the regular business meeting.

The Chairman opened with her response when people ask her what the obstacles were to her achieving her success in public elected office.

“I’ve benefitted from years of wonderful leadership of women in Fairfax County,” Bulova said, referencing the late Jean Packard, the first woman to serve as Chairman of the Board of Supervisors, Audrey Moore and Kate Hanley.

“They’ve paved the way for me,” Bulova continued. Then transitioning and acknowledging the 12 women being recognized by the Commission, she thanked them each for “your knowledge, and the way you served Fairfax County.”

Eleven women, each having spent 40 years or more with Fairfax County government, represented a collective 433 years of service.

The 12th, Deputy County Executive for Human Services Pat Harrison, was scheduled to speak on behalf of the Commission for Women during a proclamation ceremony with the Board of Supervisors recognizing March as Women’s History Month.

Laura Sizemore, a junior at Lake Braddock Secondary School and in her second year as the student representative to the Fairfax County Commission for Women, was in the audience for the recognition ceremony.

“I bring the perspective of teenagers to the commission,” Sizemore said, “I know the school side of issues like dress code and sexual harassment.”

To see the 12 women honored for their vast careers with Fairfax County, Sizemore said it inspires her to work hard and do what she wants with her life, “not what people want me to do,” she said.

The junior said computer science is a big passion and she plans to pursue a career in science, technology, engineering and mathematics, or government.