Police Arrest 20 for Heroin Use in One Day
Votes

Police Arrest 20 for Heroin Use in One Day 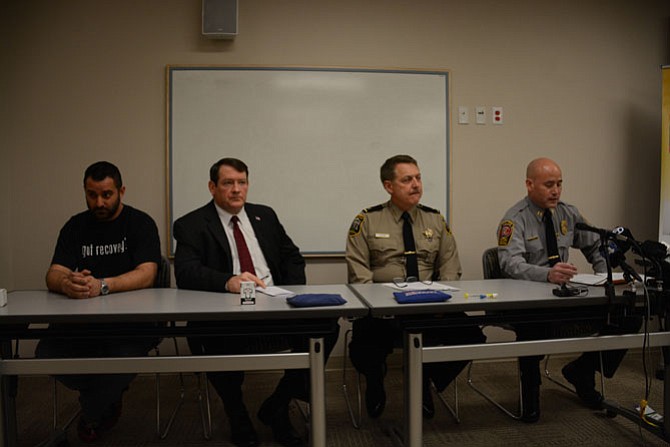 On Wednesday, Feb. 24, Fairfax County Police served 20 arrest warrants, all for possession and or distribution of heroin. They had obtained 37 warrants, but with severe thunderstorms that rolled in quickly during the evening rush hour, the operation had to be cut short.

Of those 20 who qualified as low-level users, they were given the choice while appearing before a magistrate at the Adult Detention Center to be taken to the Merrifield Crisis Center and evaluated for treatment services, or continue being processed at the jail.

Twelve individuals took the offer and rode a donated Fastran bus to the Crisis Center off Gallows Road in Fairfax, a facility of the Fairfax Falls Church Community Services Board. Those 12 were evaluated and five began rehabilitation treatment immediately.

The massive arrest operation, dubbed Save-A-Life through CAST (Chiefs and Sheriffs Together), was a multi-jurisdiction affair, including Sheriff and Police Departments in Loudoun and Prince William counties, the city of Alexandria, Manassas and the Virginia State Police.

Overdose deaths from heroin and opioid prescription medication have been on the rise around the United States; the two have been linked as people who develop addictions to prescription pain medicine such as oxycodone often move on to cheaper and more readily available heroin to continue chasing their chemical high.

Representatives from several of the law enforcement agencies gathered at the Merrifield Crisis Response Center the day after the operation to brief members of the media.

Loudoun County Sheriff Mike Chapman said, “There’s no one solution to this, but a lot of different solutions we’re trying to pull together.”

Virginia State Police Captain Greg Kincaid said troopers made three arrests on the day of the event, also pulling from ongoing investigations. Two of those were distributors bringing heroin into Fairfax County.

THOSE ARRESTED ranged in age from early twenties to mid-thirties, according to Fairfax County Police Department Commander of the Organized Crime and Narcotics Unit Captain Jack Hardin, who supervised the operation.

Hardin said more than half of the individuals were men and the rest women, and were spread out, nearly evenly, across all magisterial districts in Fairfax County, except McLean.

Once the individuals were taken to the Fairfax County Adult Detention Center, most went before a magistrate or judge and were given the choice to either be transported to the Merrifield Crisis Response Center and submit to being evaluated for services, or remain at the jail.

For those who could benefit from treatment at the CSB, Tomlinson said they “would be better served with services than incarceration.

“Recovery is truly possible,” she continued. “We’re proud of the individuals who decided to take a chance on treatment. It’s not an easy decision, I appreciate their courage.” 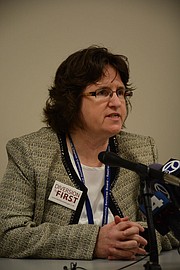 Fairfax-Falls Church Community Services Board assistant deputy director Lyn Tomlinson said many addicts start with the use of prescription medication.

“We’re proud of the individuals who decided to take a chance on treatment. It’s not an easy decision, I appreciate their courage.”

Supervisor Pat Herrity (R-Springfield) brought a board matter before the Fairfax County Board of Supervisors in October 2014, explaining there had been a 163 percent rise in heroin overdoses in northern Virginia between 2011 and 2013, and asking the board to have the county executive investigate the problem further.

“It starts with awareness,” Herrity said at the press event. Deaths from overdose “exceed car deaths in Virginia,” he said. “It’s underreported, and bigger than we think.”

Thirty-year-old Nick Yacoub of Great Falls added a human element to the discussion, sharing his story of substance abuse that dates back nearly 20 years when he began using drugs prescription medicine that was not his. Prescription drugs were eventually replaced by heroin and other substances, Yacoub said, but regardless, “Addiction is addiction.”

At his worst, or at the greatest extent of his addiction, Yacoub said he had a $3,000 per week habit that he financed in part by selling drugs, as well. “I considered it as still partying and having fun,” what he had been doing at ages 19-21.

Yacoub entered a 28-day recovery program after being arrested for Driving Under the Influence. He himself had been evaluated at the CSB, and credits the services he received, as well as a strong support networks of friends and family for helping him turn his life around.

Yacoub is now a peer support specialist supervisor and senior recovery coach with Substance Abuse Addiction and Recovery (SAARA). He also spends a lot of time speaking in public settings about his story.

“I’m comfortable in my own skin today,” Yacoub said. “I don’t hate what’s looking back, I’m not a chameleon, I’m consistent.”

Yacoub wanted to emphasize that people struggling with addiction are facing a disease. “It doesn’t turn them all into liars, cheats and thieves,” he said. “They’re not bad people trying to be good, they’re sick people.”

Though the Diversion First program was not instituted in its current form when he was arrested, Yacoub said he believes it would have helped him.

Hardin acknowledged the importance of a smooth handoff between police and the CSB, for helping more individuals like Yacoub get the recovery services they need. “Enforcement alone is not going to solve this problem,” he said.

FOR MORE INFORMATION about heroin use in Fairfax County, and what the government is working on to rein it in, visit www.fairfaxcounty.gov/news2/confronting-heroin-in-our-community.