Facing – and Fighting – the Opioid Crisis 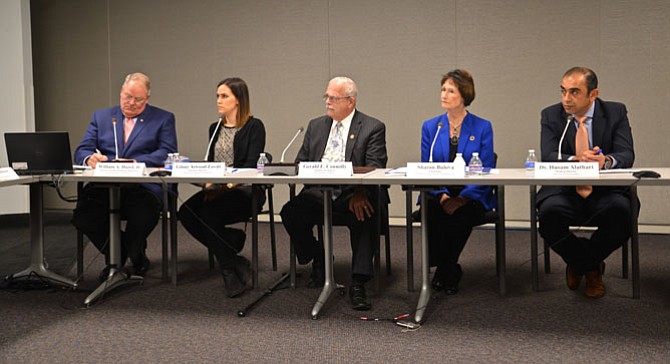 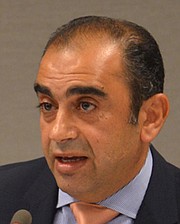 Dr. Husam Alathari, medical director of INOVA’s CATS program, says that the medical profession and treatment providers need to do their parts in fighting the opioid epidemic: “Addiction needs to be treated like the chronic medical condition that it is.” 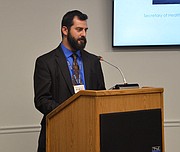 Nick Yacoub, a recovery coach, addresses the panel, recounting his own struggles with addiction from an early age: “Part of the problem [in combating the opioid crisis] is that addiction is seen as a moral failure.”

The inbox of any member of Congress overflows with information on hundreds, if not thousands, of issues and requests to address the problems that plague their constituencies. So how did the growing opioid crisis and its effects on local communities find its way to the top of the pile for U.S. Rep. Gerry Connolly (D-11)?

Connolly found himself “so taken aback” when doing a “little data reading.”

Connolly and his staff dug deeper. Calls, meetings, research, and even some drive-alongs with law enforcement followed. Then it was time to bring together the experts, the policy-makers, the front-line responders, representatives of those personally affected, and the public at large. Joining forces with the Fairfax County Board of Supervisors, Connolly and Board Chairman Sharon Bulova hosted a roundtable event on Saturday, Oct. 21 at the Fairfax County Government Center, that was aired live, as well as recorded and available for viewing on the County’s Channel 16.

“This … is an opportunity for our community to come together and bring the opioid epidemic out of the shadows,” said Connolly, “… and by bringing this panel of experts together we hope people will know they aren’t alone in this fight.”

TO START THINGS OFF, both Connolly and Bulova shared some of those numbers that so affected the congressman.

Bulova added that between January and September last year, Fairfax County Emergency Medical personnel reported 369 uses of the drug Naloxone, used to treat people suffering from opioid overdose. “That’s more than one per day,” said Bulova. “These are disturbing numbers.” The overdoses were the result of prescription drug usage, heroin, and synthetic opioids like fentanyl. “And as many of you may know,” noted Bulova, “fentanyl is 10 times more potent than heroin.”

Some studies have reported fentanyl as being as much as 50 times more potent than morphine.

Each speaker brought their own perspective to the issue, highlighting the profound negative effects being felt at all layers and levels of society, strengthening the argument that it will take the efforts of all of these elements of the community, along with the public, to wage an effective war on the opioid epidemic.

“We can’t arrest our way out of this,” said Hazel. “This is an addiction epidemic, not an opioid epidemic, and there are really only three outcomes to addiction: live with it, recovery, or death.”

Hazel, and other panel members, spoke of the effects of the crisis, beyond the immediate loss of life and the heartbreaking impact that loss has on family and friends.

Drug addiction also causes or exacerbates other medical conditions. Drug addiction in pregnant women often leads to the birth of addicted infants, or babies suffering from other medical problems. In addition to the human cost to these innocent lives, Hazel pointed out that neo-natal care for these afflicted newborns can cost about $70,000 per child.

To highlight that point, Lambert reported that 100 percent of the pregnant women currently incarcerated in Prince William County are in need of methadone to counter addiction.

Chesek spoke of the added dangers now facing first responders when called out to drug-overdose emergencies. Some of the new drugs can be transferred to the responder through touch, or even through inhalation. New gear and new methods of protecting police and emergency personnel, as well as hospital staff, are now required, and the chief expressed his gratitude for a grant from the state to provide doses of Narcan to help protect those on the frontline, as well as the victims they assist.

The panelists were in agreement that the first step in stopping the epidemic is to end the stigma attached to addiction.

MANY OF THOSE suffering from opioid addiction came to their situation as the result of legally prescribed medications to alleviate pain, often following a surgery or as the result of some accident or injury.

“You have to understand,” said Alathari, “that these drugs can literally re-wire your brain.” Alathari cited studies showing that even limited use of opioids can lead to changes in brain chemistry that makes the drug user willing to “give up food, water and sex — the main life drivers — for the drug.” The doctor said that physicians need to do their part and recognize addiction as a chronic medical condition. “These patients struggle every day. There are FDA-approved medications that can help, but the because of the stigma, the patients are often encouraged to stop taking them.”

Atwood-Lovitt also pointed to the stigma associated with addiction as an obstacle to those engaged in the war against it. Atwood-Lovitt lost her brother Christopher to an opioid overdose. During the years that Christopher and his family struggled with his addiction, Atwood-Lovitt recalled the friends and family members who “turned their backs,” no longer wanting to associate with Christopher because he was “one of those people.” Employment and normal social outlets were suddenly beyond reach “when he needed them the most.”

“Denial is deadly,” said Atwood-Lovitt. Stigma reduction, education and prevention is essential. The Chris Atwood Foundation is now engaged in advocating for opioid addiction education and treatment, and provides training in the use of Narcan, as well as helping to make the overdose revival medication more readily available.

Although in his opening remarks Connolly declared that the day’s proceedings would avoid putting politics on the table, there were a few occasions when the congressman felt compelled to address the need for “political will” as part of the solution.

“Expanding Medicaid in Virginia would bring an additional $100 million to aid in the fight against opioid addiction. Another $200 million would be available for mental health treatment and initiatives. We need all of the resources we can get to fight this.”

CONNOLLY also announced his introduction of the “Opioid Immediate Suspension Order Act (H.R. 4073).” The legislation is designed to restore the DEA’s authority to suspend a pharmaceutical distributor’s license if the Attorney General finds their actions to be causing an imminent danger to the public health and safety. H.R. 4073 is Connolly’s response to the potentially crippling effect of the Ensuring Patient Access and Effective Drug Enforcement Act of 2016 on the DEA’s ability to stop over-distribution.

Connolly doesn’t think this is the time to make it harder for the Drug Enforcement Agency “to do their job,” citing an example in a small West Virginia town, with a population of 2,924, where one distributor was able to provide one pharmacy with 258,000 hydrocodone pills in one month, not to mention the fact that “more than 300 million opioid prescriptions were written in the U.S. last year – enough for every man, woman, and child to have their own bottle of powerful painkillers.

Members of the audience were given an opportunity to make comments and ask questions. Many of those who spoke, used their time to recount personal stories of family members or of their own struggles, like Nick Yacoub, who began his addiction at the age of 10 and who is now a recovery coach.

“Recovery is possible,” said Yacoub, who described himself as a successful product of the Fairfax Falls Church CSB treatment programs, “especially if we stop viewing addiction as a moral failure.”

The roundtable concluded with messages of hope and support, and promises by the speakers to continue the fight and to continue working with each other to end the epidemic. Bulova urged members of the public to share the information and to direct others to the video of the event, and to the county’s website for information and resources. The Board of Supervisors has also recently established an Opioid Crisis Task Force that will be charged with developing plans to fight the epidemic.

“The prescription opioid and heroin epidemics are driven by biological, psychological, and social problems that require multi-dimensional solutions,” said Connolly. “We must never forget the human cost of these epidemics. We must win.”