At school’s Speakeasy Day students showcase projects of their choice and immerse themselves in Roaring Twenties culture. 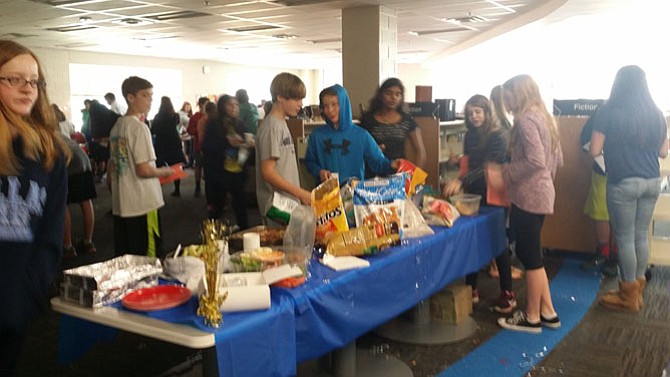 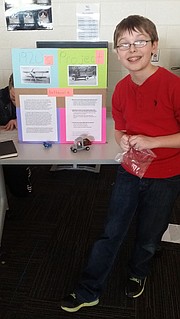 Nathaniel Kurtis, seventh-grade student, shares his model of the truck and plane to demonstrate his knowledge of assembly lines. 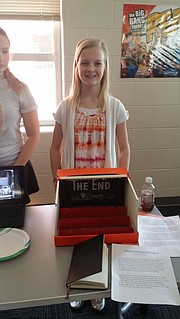 Standing in the corner of the school’s library, Nathaniel Kurtis, a seventh-grade student at Thoreau Middle School, stood behind his poster and lego model of a truck and plane that he would soon present to his teachers and peers. “Before I chose this project, I didn’t know a lot about assembly lines or transportation in the 1920s, but now I know about how it was revolutionary and very efficient,” Kurtis said. “It made cars easier to buy and cheaper to make and sell, which led to more businesses like gas stations, restaurants, and airplanes.”

Three years ago, inspired by a colleague at a different school, seventh-grade history teachers at Thoreau Middle School arranged Speakeasy Day, an annual event in which students showcase projects of their choice and immerse themselves in Roaring Twenties culture. This year, the Speakeasy Day event was held on Tuesday, March 8.

Before her students would arrive with their projects, Jill Rausch, a seventh-grade history teacher, set up food and finished last minute decorations. “We are doing the 1920s, because it’s a fun time period for students to learn about,” Rausch said. “The next unit is the Great Depression; so we’re not going to have a party with that. Projects for seventh grades can be daunting. But this set up with the gallery walk takes away the anxiety.”

As students hustled into the library to set up their projects and prepare, one student placed a diorama of a movie theater on the desk. Abby Williams, a seventh-grade student, chose to create a theater because she was fascinated by the concept of entertainment for the masses. “Because assembly lines were starting, it gave people more free time so they could go to watch movies and do fun activities,” Williams said. When asked how she expects the dynamics of cinema to change in the future, she said, “I think movie theaters are still really popular even though there’s Netflix. It’s just a fun place to go to.”

While students have the freedom to choose a particular aspect of the time period as well as showcase their knowledge in their preferred method, teachers are faced with a different challenge--grading or placing a label on creativity. “At the start of the project, we talked a bit about expectations and what I was looking for,” seventh-grade history teacher James Cain said. “We were asking students questions,‘Tell me about your project instead of telling me what you wrote.’”

When asked whether or not it was a coincidence that many students, regardless of their topics, weaved the assembly line into their presentations, Cain responded “It was more of a coincidence; students could do something with art, literature, music, or transportation, but a lot of kids liked the hands-on aspect of building something which led to the assembly line.”

The seventh-grade social studies curriculum at Fairfax County Public Schools spans almost 150 years - US history from 1865 to the present. Yet, this particular time of shifting cultural and economic dynamics has lended itself to fascination among pop culture junkies [think Baz Luhrmann’s 2013 film “Great Gatsby”] and scholars alike. “This is one of the times we can just talk about culture,” Cain said. “We’re not talking about politics, or international relations. This is a chance [for students] to learn about how people lived, what people did, and examine the culture, especially because in the 1920s, we see electricity, cars, planes, radio, and I think kids can identify with this culture more than with others.”

While history stories are often prone to rote learning, teachers at Thoreau Middle School have taken a different approach to learning. “A lot of times we give primary sources and have students interpret those sources, or try to put students in the situation of people back then and think as they would,” Cain said. “We focus a lot on looking at things from multiple perspectives.”

Daniel Iverson, among the last students to share their projects, brought in a drawing of a skyscraper. “I thought the skyscraper was a really good design of art, because [although] it’s more common now, back then, it was a modern wonder,” Iverson said. “Electrification created all the technology we have today -- pipe cleans, lights, elevators, light bulbs, cars, all sorts of things were important because of electrification.”