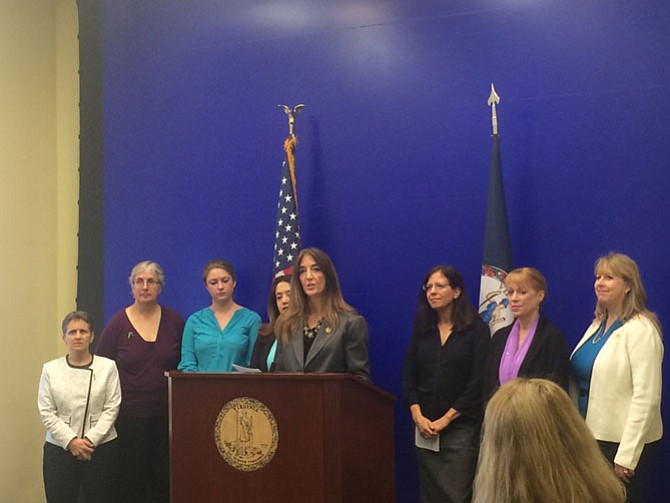 Del. Eileen Filler-Corn addressing the press after her press conference.

On Friday, March 11, Del. Eileen Filler-Corn (D-41), flanked by leading voices in the fight against campus and domestic sexual assault participated in a press conference in Richmond on the last day of the 2016 General Assembly session announcing the passage of several bills addressing this issue.

Filler-Corn introduced three bills this session focused on this topic.

“Yes, we had success last year moving the ball forward on these crucial issues,” said Filler-Corn referencing related bills she helped shepherd last year, “but the key this session was to shift focus to education and prevention. This year we did exactly that. My hope is that with earlier information, young people can prevent incidents of sexual assault both on campus and in any and all settings.”

The sentiment was echoed by several longtime victims’ rights advocates who praised the legislation as thoughtful and substantive.

Said Gil Harrington, mother of Morgan Harrington and founder of Help Save the Next Girl, in Richmond on Friday: "I applaud the work of Delegate Filler-Corn. House Bill 659 will teach high school students skills that may actually ensure their very survival in our complex world. House Bill 1102 will train investigators to respond with more compassion and help improve psychological health for victims.”

Annie Clark, executive director of End Rape on Campus, termed the education component “a critical first step. If we wait until college orientation to talk about sexual assault, then we are way too late.”

She, too, credited the Springfield lawmaker for her leadership on the issue: “End Rape on Campus is so thankful for Delegate Filler-Corn’s commitment to ending sexual violence and supporting survivors.”

HB 1102 and HB 1160 were among 21 recommendations of a state task force formed by Governor Terry McAuliffe and led by Attorney General Mark R. Herring.

All of the bills have an April 11 deadline for the Governor to either sign, veto or amend.