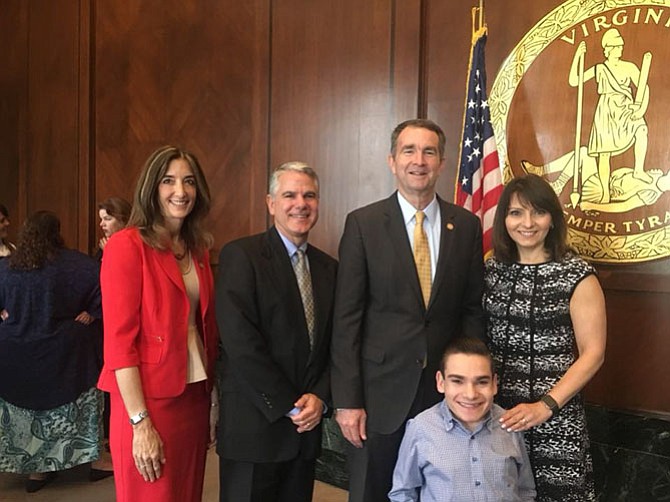 This legislation builds upon Del. Filler-Corn’s legislation signed into law from previous years, including HB 2257 (2017), which provides that schools can teach about the law and meaning of consent, HB 1709 (2017), which requires principals to notify parents if their child is a part of a bullying investigation, as well as HB 659 (2016), which requires any high school family life education curriculum offered by a local school division to incorporate age-appropriate elements of effective and evidence-based programs on the prevention of dating violence, domestic abuse, sexual harassment, and sexual violence.

“HB 45 tackles two major priorities of mine, combating sexual assault and bullying,” said Filler-Corn. “This bill is all about prevention,” she added, remarking that if the first time students learn about these issues is a college orientation, then it is too late.

Filler-Corn was joined in Richmond by Brandon Farbstein, a young activist whose harrowing tale of being bullied was a partial impetus for this bill. Representatives from the Sexual Assault Resource Agency, the Virginia Sexual and Domestic Violence Action Alliance, YWCA Richmond and Hanover Safe Place were also on hand for the signing.

This is not the first time Filler-Corn has introduced this bill. She introduced a similar measure in 2017 (HB 2406), which made it to the floor of the House of Delegates before being re-referred to the House Education Committee where it was left for the duration of the Session. However, this year was different. HB 45 passed out of the House of Delegates and the Senate floors unanimously during the 2018 General Assembly Session. The law will take effect on July 1, 2018.