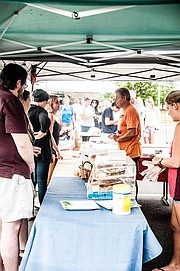 New Location to be Determined

Food shoppers should take their collective hats off to Jean Janssen. She is the motivating spirit behind the area’s Smart Markets, a collection of farmers’ markets that showcase locally grown and raised produce and meats, plus a few temptations, such as hand-made sausages, popcorn, and baked goods (as in divine French pastries).

But once you know that Janssen has been in the food world since childhood, you can understand why these privately run markets are such a smashing success. A native Virginian, Janssen grew up in a family that purchased most of its goods from local farmers or from her grandfather’s large garden plot. Also her parents were great cooks, a basic food influence for a youngster.

As an adult, Janssen worked as a caterer in the metro area for 20 years, during which time she often purchased goods from the now-defunct farmers’ market in Vienna’s Nottoway Park. “When I decided to retire from catering,” said Janssen, “the Nottaway market was needing a new market manager. It was a volunteer position, but it sounded like it would keep me involved in the food world.” Not only did she take that position, she was later asked to open a new market for Fairfax County on Braddock Road at Wakefield Park, and she ended up managing both markets.

In 2008, however, Janssen decided that the local producers needed better showcasing to improve sales, and that hosting local farmers’ markets could be a great community resource. So with the support and encouragement of vendors, she decided to open Smart Markets. “The first market was down street from our present Oakton market,” she said, “and I was led there by Nottaway Park shopper who encouraged me to talk to someone at her church. After that, others have come to me and asked me to do a market.”

As in any enterprise, there are ups and downs, and as Janssen has found not every location is a good fit, and in one instance, an office property was sold out from under them. “I must deal with that,” she said, “because we are on the bottom of the totem pole,” since a market sets up usually only once a week. But when an agency or community residents see that a Smart Market helps them, a business may step in and offer space.

Because she does not pay to advertise, word-of-mouth attracts vendors, who then approach Janssen about setting up their stall at one of her locations. Once they start and sell successfully, she urges them to attend more than one market to enhance visibility and sales. “Our vendors do well compared with others,” she said, “and we work with them to help them succeed.” Janssen notes that her rules are strict, too, and insists that vendors must arrive early to set up, and must be the owners of the farm or other business to interact with customers.

And, not surprisingly, Janssen has found that fresh, seasonal fruits and vegetables are the biggest sellers. She has also concluded that farmers reap bigger profits from farmers’ markets sales than from selling their goods to wholesale merchants. “Small farmers, to exist,” she said, “must sell directly to consumers.”

Note: For the list of Smart Markets locations, visit http://smartmarkets.org.

Serves 4 to 6 as a main course

This is my very favorite pasta sauce and it can easily be converted to a vegetarian dish with a few substitutions and/or omissions. You can vary the quantity of the individual vegetables as I have done here while adapting from a recipe in the September 1974 Gourmet. You can also adapt it to a winter recipe with good results using canned tomatoes. It’s still a great vegetable medley to serve over pasta.

In a large sauté pan, cook two slices of bacon till nearly done but not crisp. Remove bacon, drain, and add 1/4 cup good olive oil to the pan. Add one small onion, two small carrots, two garlic cloves, two radishes, all finely minced, and 1 to 2 tablespoons finely chopped fresh basil. Simmer, covered, for 12 to 15 minutes. Add three cups thinly shredded cabbage, 1/2 pound each of diced zucchini and tomatoes, 2 small green peppers, seeded and diced, and 1/2 cup chicken or vegetable stock. Season with one teaspoon each of salt and pepper. Simmer for another 10 to 15 minutes.

Meanwhile, cook one pound of fresh spinach noodles or packaged fettuccine in a large pot of boiling water with 2 tablespoons salt till done. Drain the noodles and toss them with up to 6 tablespoons butter, 1/2 cup each of Parmesan cheese and the chopped bacon. You may also add some finely chopped prosciutto at this point. Add the vegetable mixture and serve with additional grated Parmesan.