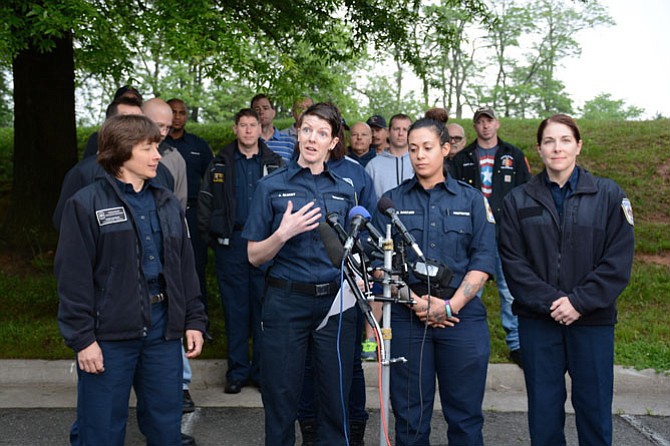 Female firefighters and supporters gathered outside Fairfax County Fire Station 8 in Annandale to assert their positive experiences as women in the department. Photo by Tim Peterson. 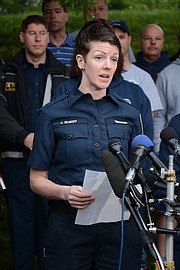 Firefighter-paramedic Alisha Reakoff, a member of Fire Station 8 in Annandale, wanted to tell positive stories about her experience with the Fairfax County Fire & Rescue Department in light of an investigation of cyberbullying and the suicide of Nicole Mittendorff. 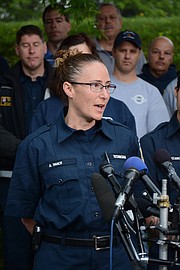 Twelve-year veteran EMS Technician Alyssa Vance of Frederick, Maryland praised the Fairfax Fire & Rescue Department for helping develop a custom work schedule for her to be able to care for her children.

For five-year veteran firefighter-paramedic Alisha Reakoff, her “gender has been a non-issue” in her experience with the Fairfax County Fire & Rescue Department.

Reakoff stood before a crew of reporters and cameramen Wednesday morning, May 18, at Fire Station 8 in Annandale, where she’s assigned.

Behind her stood other female firefighters, paramedics and technicians, and male supporters from around the county.

Reakoff said they came out because they were “disheartened how the department is being portrayed publicly.”

Fairfax County Fire & Rescue Department spokesman Willie Bailey said Reakoff contacted him about hosting the public statement at the end of last week. He attended the event but there was no comment or presence on behalf of Chief Richard Bowers, who Bailey said is out of town this week.

Following the death of firefighter-paramedic Nicole Mittendorff, comments from users claiming to be firefighters bullying Mittendorff on the message board Fairfax Underground came to light. Bowers launched an investigation into the bullying.

A sexual harassment suit against the department has also been filed by a female firefighter.

Fairfax County Board of Supervisors Chairman Sharon Bulova announced Tuesday, May 17 that the supervisors would be directing the county executive to enlist a third party consultant to investigate the work environment of the Fire & Rescue Department.

The focus of the investigation, Bulova said in a statement, would be on “Equal employment issues, workforce morale, mental health assistance and communication issues. County staff will develop a more formal scope of work for this study. Fire and Rescue Chief Richie Bowers fully supports this initiative.”

But, as Reakoff repeatedly asserted to reporters at the short press event, she and her group weren’t there to discuss the department or investigations, just their personal experiences.

“We’ve worked hard to earn the respect of citizens,” Reakoff said. “We want to see positive come back into the light.”

Reakoff said from the time she entered basic training with an all-male staff, through her employment with the department, she was “never treated differently because of gender. It didn’t matter to them.”

She also said she wasn’t attempting to deny any of the allegations of harassment that have surfaced following Mittendorff’s death.

“Like any family, you have some black sheep,” she said. But, she added, “the actions of a few should not tarnish” the image of the department as a whole.

She praised the department for working with her to establish a flexible schedule that would accommodate her needing to raise children.