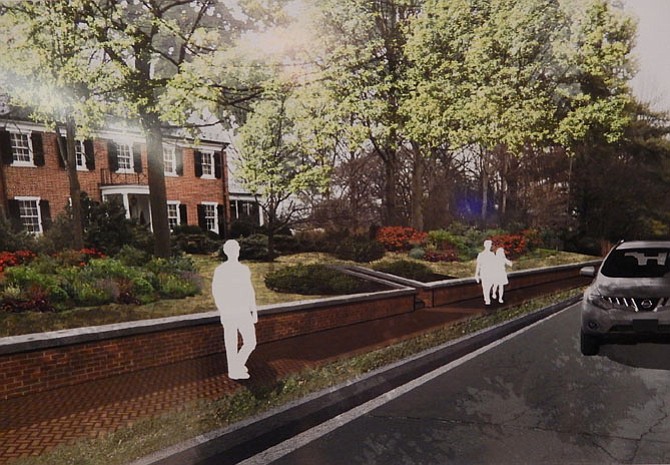 Fairfax County — The Rust Curve proposal is controversial, with residents on both sides of the issue. But, believing in the many benefits it’ll bring, the Fairfax City Council has given it a green light.

“It offers walkability now and in the future,” said Councilwoman Janice Miller. “The capital projects we undertake today will bring in more young people interested in walkability.”

The project entails building a continuous brick sidewalk on the west side of Route 123/Chain Bridge Road between Old Town Fairfax and Rust Hill Place. It also replaces the drainage ditch and deteriorating sidewalk along Chain Bridge Road with a new, at-grade curb, gutter and sidewalk.

In addition, it will extend the sidewalk around the curve to the bridge, add a variable-height retaining wall with a brick facade, fix the erosion problem along the curve, and provide a design preserving the character of Rust Curve, while creating a more visually appealing gateway to Old Town.

During the Oct. 25 public hearing, Mark Gunn with Rinker Design Associates explained the project details. “At the south end, the existing sidewalk is in disrepair, and the ditch drop-off makes it a hazard to both drivers and pedestrians,” he said. “We propose a 6-foot-wide sidewalk adjacent to the retaining wall and a new, storm-sewer system will take stormwater from the south end to its outfall in the north. We’ll also replace the waterline.”

THE HIGHEST POINT of the retaining wall will be 10 feet at the curve, with 2-1/2-foot sections at each end. There’ll be a 2-foot buffer between the sidewalk and curb, with 25 gas street lights within the buffer.

Also planned is a barrier between the roadway and the sidewalk at the northern end, replacing the existing guardrail. Utility poles will be removed from the west side of the road, and the utilities will be undergrounded. And although replacements will be planted, 91 trees will be cut down.

At a June community-outreach meeting, Public Works Director David Summers said traffic would have to be detoured, six to nine months, during construction. “We’ll have to close a lane on Route 123 – and this closure would happen, regardless, because of the waterline-replacement project,” he said. “We’ve already had five breaks in that area.”

Cost of engineering, right-of-way acquisition, utility work and construction is an estimated $4.6 million; construction, alone, comprises approximately $3.8 million of that amount. Some $2.55 million will come mainly from state and federal funds. Some $2.05 million more is needed, but the City is applying for FY 2018 funding; options include revenue sharing and/or 30-percent NVTA funding.

If approved, the money would be available to the City on July 1, 2017. And while Transportation Director Wendy Block Sanford said there’s no guarantee these funds will come, she noted, “We’ve been successful receiving this funding in prior years.”

On Oct. 25, said City Manager Bob Sisson, the City was authorizing continuation and finalizing of the project design and right-of-way acquisition. And, added Gunn, “We could also move the poles out of the way and underground the utilities.”

After hearing several residents weigh in on both sides of the project, the Council members discussed it before taking a vote. “I consider this more of a safety-hazard reduction project,” said Councilman Michael DeMarco. “It’s about preventing future erosion and having better stormwater management. It would be better to fix the problem now, than later, when it’s an emergency.”

However, Councilwoman Ellie Schmidt said she had “real concerns about the steepness of the sidewalk. Walkability is important, but it needs to be safe. The existing sidewalk needs to be replaced. The cost has gone up and we don’t know for certain that we’ll get the rest of [the funding], at this point. I’d support sidewalk repair and erosion fix, but can’t support the project as it stands now.”

But Miller worried about people walking on Route 123 now “because of the dangers of crossing it. This [project] gives us a continuous sidewalk on the west side, some lighting and keeps the road from being widened in the future.” She also explained that the work to improve drainage, underground the utilities, deal with the existing erosion on the hill and improve the aesthetics – “which the community wants” – has made this project more expensive than it was initially.

AGREEING, Councilman Jon Stehle said, “We must improve the sidewalks, drainage and erosion here. We must move [this project] forward.”

While also concerned about the erosion on the hill and the “appalling” condition of the current sidewalk, Councilman Jeff Greenfield had his own reservations. “I’d tell [City] staff to go get the funding and come back to us when you have it. I’d love to see us improve pedestrian access at Taba Cove [Court] with a flashing light and repair the sidewalk. Let’s improve the existing conditions. [For those reasons], I can’t approve this project tonight.”

Councilman David Meyer, though, spoke in support of it, “while having immense respect for the homeowners who have concerns about it. The City is changing, people are living in new areas and I believe this project will affirm their connectivity. And while nothing is absolutely certain, staff has said they have a reasonable expectation that the money will be available in succeeding fiscal years.”

The Council then voted 4-2 to move the project forward, with Schmidt and Greenfield voting no.