From Atlanta to Alexandria. 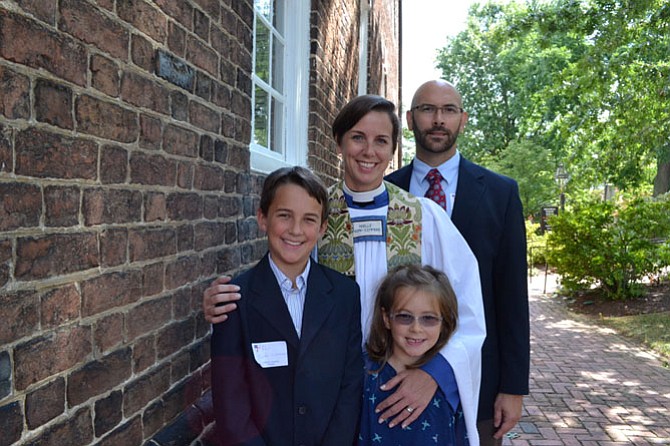 Alexandria welcomed the Rev. Noelle York-Simmons, the 28th rector of the 243-year-old Christ Church, in September. She’s the first female rector, and among the youngest at 40 or under, in the church’s history of attending to the spiritual needs of U.S. presidents to the very poor and everyone in between.

“I’ve had a marvelous welcome,” York-Simmons said. “Leaders across denominations have extended themselves.”

York-Simmons comes from Atlanta, and has more than a decade of experience serving as senior rector and associate rector at Atlanta’s All Saints’ Episcopal Church whose membership tops 3,000.

A wife, mother of two, an avid reader intrigued by social justice, York-Simmons earned her undergraduate degree from Emory University — BA in English and Women’s Studies — and later matriculated to Berkeley Divinity School at Yale — Master of Divinity. “That was a great experience,” she said, “a great mix of deep intellectual thought and expertise.”

“The Christ Church staff is energized by Noelle's arrival,” said Meredith Bracco, communications manager. “We've been in a state of transition for over two years, with all of the ups and downs that come with changes in leadership, so we're excited to live in Noelle's vision for the mission and ministry of Christ Church in Alexandria and beyond.”

York-Simmons replaces her predecessor, the Rev. Pierce Klemmt, who retired in 2014 after 20 years with the church.

Her goal now is to get to know Christ Church and to show the community her style of leading, speaking, working and “inspiring people to go do good things in the world.”

“The church is easy to love,” York-Simmons said. “I’m deeply impressed and proud of the good work the church is doing.”