“It took a team of people hundreds of hours to save one life. If we hadn’t taken this case, he’d be dead.”

Alfred Dewayne Brown loves the Alexandria Waterfront. He enjoys visiting the shops and restaurants in Old Town and meeting the family of his Alexandrian lawyer, Brian Stolarz. Brown is closer with Stolarz than most clients are with their attorneys. The two are good friends and even have matching tattoos: scales of justice. Brown has the number “154” written above his, because Brown is the 154th inmate on death row to be exonerated. If it weren’t for Stolarz, Brown would be dead. 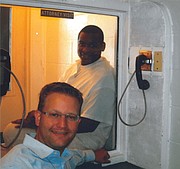 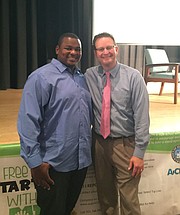 Brown joined Stolarz at the Lee Center on Sept. 29 to talk about Stolarz’s new book, “Grace and Justice on Death Row.” Stolarz and Brown spoke about visits to death row in Livingston, Texas. In 2003, Brown was accused of murdering two people in Texas, one of them a police officer, in a botched robbery. One of the men who’d committed the murder said Brown had pulled the trigger. But Brown told the court, and his lawyers, that he was at home the whole time, that he’d even called his girlfriend at the time of the murder.

The trial lasted three days. Stolarz called it “fast food justice.” Brown’s attorneys pressured him to take a guilty plea deal the state was offering, but Brown maintained his innocence. Brown was convicted and sentenced to death.

In 2007, Stolarz was working in his office when a colleague asked if he was interested in taking a pro-bono death penalty case. Stolarz travelled to Livingston. As soon as he met Brown, he knew the man was innocent.

“It was like meeting me wife or child for the first time,” said Stolarz. “It was like a shot through my body.”

Stolarz shared pictures of Brown’s cell, narrow enough that standing in the center Brown could touch both walls. Brown was in the cell 23 hours each day for 10 years. Compared to his cell in the regular jail, Brown said it was like going from a dog kennel to a bird cage.

“This place breaks people,” said Stolarz. “One guy gouged out his eye and ate it. After they took him to the infirmary, he gouged out the other one and ate it too.”

While there, Stolarz said he also saw executions, showing the crowd the gurney where the state carries out lethal injections. Stolarz said he promised Brown he would never face execution, but wasn’t sure at the time if he could keep that promise. When he left the jail for the first time, Stolarz said he threw up in the parking lot when the gravity of what he was about to work on hit him. This was the beginning of a decade-long struggle for Stolarz, working pro-bono, to prove Brown’s innocence.

The case against Brown was weak from the start. There was no forensic evidence, DNA, gunshot residue, or fingerprints that put him at the scene. The state’s case was built on the testimony of one of the murderers and a witness. Stolarz started with the witness, going out to the scene where the witness said she’d been and realized there was no way she could have seen Brown clearly from that position. Stolarz found and confronted the witness about this, who said that she hadn’t really seen him but that there was pressure from the District Attorney’s office.

“The police told her they’d take her kids away unless she testified,” said Stolarz.

Brown had also had a witness working in his favor, his girlfriend Ericka Dockery, who’d said Brown was home the whole day and had called her from home. But like the other witness, she was harassed by the District Attorney and even jailed for four months until she agreed to recant her testimony.

“I interviewed her later and she said she’d had to choose between Dwayne [Brown] and her children,” said Stolarz.

Dockery was difficult to find, but she eventually agreed to talk to Stolarz. She told Stolarz that Brown had been home at the time of the murders, as she’d originally said.

The more he looked into the case, the more Stolarz said he found the signs that it had been mishandled by the state. The foreman of the grand jury for the police officer shooting case was a police officer, put in place by the judge. Brown’s lawyer worked at a desk right next to the lawyer representing another murder suspect in the case. Brown also has an IQ of 69 and legally someone with an IQ below 70 cannot be executed. However, the state turned to Dr. George Denkowski who gave Brown four extra points on the IQ test because he said Brown was stressed at the time. As the investigation continued, Denkowski was reprimanded by the state and agreed to stop reviewing death penalty cases. Texas also abolished the “pick-a-pal” law that allowed judges to select who served on juries.

The overlooked evidence of Brown’s innocence kept piling up. Brown had received a letter in jail from someone essentially confessing to the murder, who included details of the murder that had never been made public.

“Dobbie [Brown], that wasn’t nothing but one big set up for you,” the letter read.

Stolarz also spoke with one of the other men accused of murder, who swore an affidavit that Brown was not there at the time of the murder.

The final piece of evidence that emerged came out of a retired police officer’s garage. After years of searching for a document that would prove Brown made a call from the phone at home during the murder, a police officer found a record buried deep in his garage. The record showed that not only had a phone call been made from the house at the time of the murder, but an attached note signified that the prosecutors had seen this document and did not share it with the defense or submit it as evidence.

Stolarz reached into his pocket and presented the piece of paper.

“We spent eight years looking for this one piece of paper,” said Stolarz. “All that work and it was found in a box in a police officer’s garage.”

Even after the District Attorney agreed to a new trial, it took 17 months before the state’s Court of Criminal Appeals accepted the motion.

Throughout the struggle to collect enough evidence to prove Brown’s innocence, Stolarz said there were several moments where he’d get depressed and feel like the case was hopeless. It was in those moments, Stolarz said, that Brown would give him the reassurance he needed. At first, Brown said it took him three years to really trust Stolarz, but after he trusted the lawyer Brown said he never once lost faith that Stolarz would fulfill his promise to get Brown free.

On June 8, 2015, that promise was fulfilled when the District Attorney’s office agreed to drop all charges. Now, Brown and Stolarz travel together to talk about the experience and advocate for criminal justice reform. On their visit to Alexandria, Stolarz said he and Brown went to the waterfront and watched the boats on the Potomac.

“It took a team of people hundreds of hours to save one life,” said Stolarz. “If we hadn’t taken this case, he’d be dead.”

Brown and Stolarz’s story resonated with those in attendance at the Lee Center. Several spoke to Brown and Stolarz and asked questions. Afterwards, several police and sheriff’s deputies gathered around the two and took pictures with them.

“This is a man who was pushed but did not fall,” said Hadi Kamara, an 11th grader at T.C. Williams High School. “Being here today and listening may create some anger and disdain, rightfully so, but that’s not why we’re here. It’s about forgiveness.”

Barbara Swanigan said she has a brother she believes is in a similar situation and said listening to Stolarz gave her hope.

“It was like a movie that came to life,” said Benjamin Savage. “You have to believe in yourself and never give up hope.”

Behind Texas and Oklahoma, Virginia is the state with the third most executions. Stolarz said many of the legal problems that exist in Texas also exist in Virginia.

“We need change in this state too,” said Stolarz. “There is inadequate defense for people [accused in death penalty cases].”