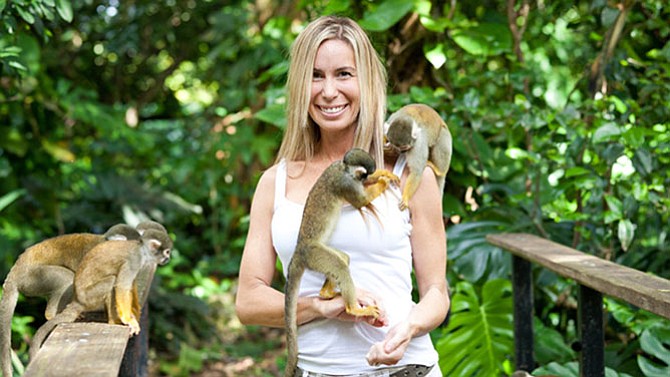 Mireya Mayor works with all kinds of lemurs in Madagascar. Photo Contributed 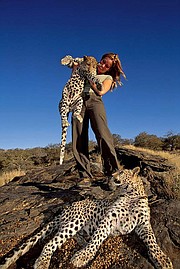 Mireya Mayor at the expedition in Africa.

Deep within the luscious, natural green abyss of Guyana’s rainforests stood a young explorer, eating rice and beans with a small group of locals. She had come to study the small South American country’s rich biodiversity, the forest crawling with jaguars, brightly-colored tree frogs, spider-monkeys, toucans, and deadly anacondas. Who would guess that just a few days before, she had been waving pom-poms, jumping up and down, yelling “Go Dolphins”?

Great Falls resident Dr. Mireya Mayor has never been typical. Growing up in Miami, she was a relatively sheltered “girlie-girl,” taking ballet lessons and wearing frilly dresses that her Grandmother made. Her mother, a Cuban immigrant, forbid her from joining the Girl Scouts, proclaiming it to be “far too dangerous.” She always had a deep love for animals, though, and an intrinsic hunger to learn and explore.

When finishing her undergraduate degree at the University of Miami, Mayor decided to take an anthropology class. She had been on track to become a lawyer, but when discussing primates one day in class, everything changed. She was overcome by the reality that some of these animals, our closest living relatives, were on the verge of extinction and had gone unstudied. In some cases, not even a single photograph existed to prove their existence. While she had never felt that she was particularly good at math or sciences, she had never left the country, and had never even been camping, Mayor suddenly found herself pursuing a career path that no one expected out of a former NFL Miami Dolphins cheerleader – she wanted to be a scientist.

AFTER SETTING OUT on that first expedition to Guyana, Mayor fell in love with exploring. She has since dedicated her life to these creatures, travelling the world and working with the locals of countries most haven’t even heard of to track and study these rare and endangered primates, as well as larger mammals and even reptiles. Today, she is a world renowned primatologist, anthropologist, conservationist, and the first female wildlife correspondent for the Ultimate Explorer series on National Geographic Channel. On Wednesday, Sept. 28, she was one of seven people to be awarded the distinguished inaugural IIE Global Changemaker Award in celebration of the 70th anniversary of the Fulbright Program.

Mayor has chased giraffes and leopards in Namibia, drank cow’s blood in Tanzania, survived a plane crash, and has tracked (and been chased by) 400-pound silverback gorillas in Congo. She is the author of “Pink Boots and a Machete,” a book about her life. Mayor continues to work with National Geographic Society and the Amazon Conservation Team to ensure that these animals live to see the next century.

In 2006, Mayor co-discovered a new species of mouse lemur on an expedition in the jungles of Madagascar. It is known as Mittermeier’s mouse lemur (Microbus Mittermeieri), named in honor of primatologist Russell Mittermeier, president of Conservation International. In 1996, when Mayor began her work, only 30 species of lemurs were known to man. Today, over 90 species have been discovered. “Every scientist dreams of this happening to them, but no one sets out with that intent in mind,” Mayor said. “Most great discoveries happen by accident.” Following this discovery, Mayor convinced Madagascar’s leaders to declare the mouse lemur’s habitat a national park, and the president has since committed to triple the number of protected areas on the island.

IN ADDITION to living this slightly wildlife, Mayor is a mother of six children, whom she encourages to be global citizens with caring hearts, to follow their dreams, and to have a greater understanding of the diversity on this planet, which needs to be taken care of and conserved for years to come. “She has certainly worked very hard, a completely self-starting woman, and she has made her own career,” said Dr. Linda Taylor, Mayor’s undergraduate academic advisor and mentor. “She has really made a difference in the world, and it’s amazing that because of her work, our grandchildren will get to see animals that would have otherwise gone extinct.”