Arlington: Generations of the Bean
Votes

Arlington: Generations of the Bean 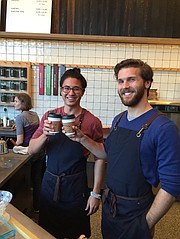 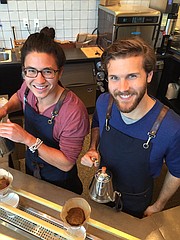 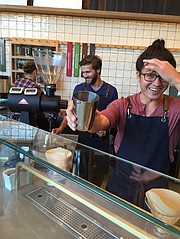 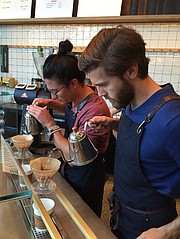 For many people, coffee is a utility. It's a necessary pick-me-up to get through the long work day. That's how Chase Damiano saw coffee until he met Robbie Peck. For Peck, coffee was something more. It was an art. More than just a stimulant, for Peck, every cup of coffee is a blend of carefully selected scents and tastes. When their coffee shop, Commonwealth Joe Coffee Roasters, has its grand opening Saturday, Oct. 22, Peck and Damiano hope to change how Arlington County sees coffee.

The coffee shop at the heart of the rapidly developing Pentagon City is the first brick and mortar location for the local coffee roasters.

Peck started Commonwealth Joe in 2012 as an extension of his mother’s passion for coffee. She roasted for her friends and family, but never had the interest in business or marketing to expand beyond that. At the time, Peck was working at a consulting job in the area, starting Commonwealth Joe as an online-only way of selling his family’s freshly roasted coffee.

Damiano was working as a consultant at the same office job as Peck. The two of them worked closely on various projects and when Peck started selling coffee, Damiano became his first customer.

By 2013, Commonwealth Joe was starting to pick up steam. The company began travelling to farmer’s markets and selling in person. Peck left the consulting job to focus on his coffee start-up.

“I knew I didn’t want to be there; I wanted to be an entrepreneur,” said Peck. “To be entrepreneurial means taking a calculated risk. Ultimately, the worst case scenario was going back to what I was already doing before. At least I’ll know that I went for it.”

At the farmers’ markets, Peck learned that the fundamental success of their brand would depend on building strong relationships. He used the connections built through those markets to sell their coffee in local stores, like Frenchman’s Corner in Culpepper, the Clifton Wine Shop, and random stores throughout the region. One coffee shop, The Java Shack at Courthouse Plaza, proved to be the growing brand’s big break.

Twenty years ago, The Java Shack’s owner Dale Roberts left his job to start up a coffee shop.

“It was a passion for me,” said Roberts. According to Roberts, the coffee shop craze hadn’t taken off yet in the area, still being a mostly West Coast phenomena. “We were more of a neighborhood hangout coffee shop. It was different back then, things like pour-overs and stuff were not popular. We had a French press, but that was about it. So after 20 years, I was ready to do other things. I’d met [Peck] when he first started with Commonwealth Joe and I saw his passion and his energy. It was there the way it was back in ‘95. I thought he might be the perfect person to have him take over, because I didn’t want it to all just go away.”

In 2015, Peck and Damiano took over The Java Shack.

But behind the scenes, Peck and Damiano were making major changes to the coffee shop. The pay and hours system, manually done since the shop’s inception, were modernized. Peck said the surface of the shop stayed the same, but, beneath that, the nuts and bolts of The Java Shack were completely reworked. The result was one of the most profitable years ever, and yet Peck said the size of the space was keeping them from fully exploring their ambitions. Running The Java Shack taught the pair the basics of running a coffee shop, but Peck and Damiano were still interested in having a bar with a pour-over space, nitro cold brew, and other amenities that would have to be built into a new space.

While managing The Java Shack, Peck and Damiano began working more with local developer Vornado to provide coffee for events. Their work began to take them more into Crystal City and Pentagon City, where Peck said they found an area of the county in the middle of a massive transition.

“It was really growing,” said Peck. “But when we bought the lease here, the building on 12th Street wasn’t open yet. The area looked empty, but we had to envision what the future of this area looked like.”

But it’s not 1996 anymore, and The Java Shack isn’t the only other coffee game in town. There are four Starbucks within a few blocks of Commonwealth Joe, all of them closer to the Pentagon City and Crystal City Metro stations. While he was managing The Java Shack, Roberts said he saw a flood of coffee chains move into the area and be forced out soon thereafter.

“I could name a dozen coffee places that opened and failed,” said Roberts. “[They had a] lack of passion for coffee and community involvement, those are the two things that I feel make Java Shack successful. We just had really good coffee; made with pride. What makes a coffee shop is the passion for coffee and for people, otherwise you’re not going to be successful.”

Peck says their store is going to have to prove to the local community that its quality can beat the competition’s price and convenience.

“It’s the same decision people make with craft beer,” said Damiano. “Are they going to get a $7 pitcher of Bud light, or going to spend $9 for something like DC Brau. It’s a choice, but people are increasingly interested in quality and paying a little more if we can show people that our coffee is better.”