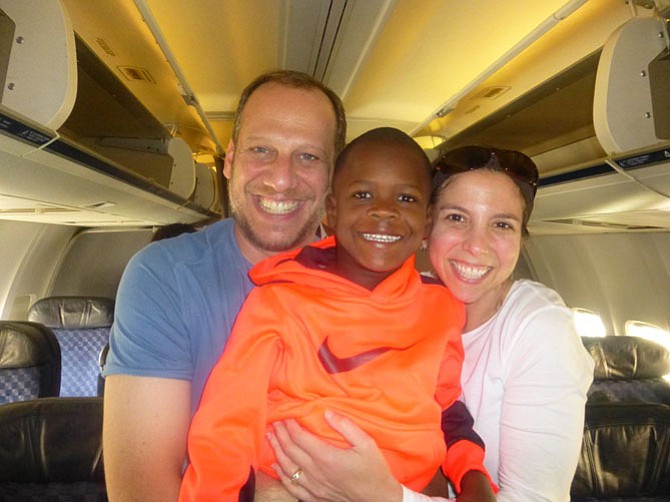 Five-year-old Luke Freishstat is exuberant — about his two older brothers and mom and dad, his classes at Georgetown Hill Elementary, his new friends, his new home in Potomac — but particularly about his chocolate Lab.

Luke arrived in Potomac in December after three years of governmental red tape while waiting to be adopted.

Dr. Rob Freishstat first met Loukin (Luke) in 2013 on one of his many medical trips to Haiti after the earthquake in 2010. Luke was a 2-year-old who had been abandoned at the Hospital Sacre Coeur in Milot, Haiti. He was suffering from severe starvation and dehydration. "I didn't leave his side for the next few days," said Freishstat. "I just connected with him from the first hour of meeting him. Soon, I called my wife Jamie and discussed adopting him. Both of us fell in love with the country and the Haitian people from the first time we traveled there — and Luke just grabbed my heart."

The Freishstats have two sons who were ages 13 and 10 — and everyone in the family soon became excited about the newest addition to their family. However, all of them spent three more years waiting to bring him home. They searched to be certain his parents were not still alive, visited him on a regular basis and introduced their sons to him. "The bureaucratic nightmares with both Haiti and the U.S. seemed to take forever to work through," said Freishstat. "We are just thankful that he is now a U.S. citizen and our son.

"When we went to pick him up to come home, he was not waiting in the door of the orphanage as he usually was," said Freishstat. "The folks in the orphanage actually called him the President because he always stood in the door greeting everyone who came. But, on this day he wasn't there — he was being bathed and packed — ready to come with us. The excitement was contagious."

He arrived at his Potomac home on Dec. 9 and has loved everything about his new life. He's learning English quickly and loves reading, working puzzles and going to school. When it snowed in February, he kept saying that a snowman was coming. He loved the sledding — and building his own snowman.

U.S. Rep. John Delaney helped with moving the adoption forward. Delaney nominated the Freishstats for the Congressional Coalition on Adoption Institute "Angels in Adoption" Award. Their family accepted the award on Sept. 20 at the Ronald Reagan Building. The CCAI's Angels in Adoption Program honors individuals, couples and organizations that make an extraordinary contribution on behalf of children in need of homes.

Freishstat said, "Luke particularly liked wearing a belt to the occasion and walking down the red carpet. He was also able to reconnect with twins from his orphanage who have been adopted by a family from Kentucky. We all had a very special evening."