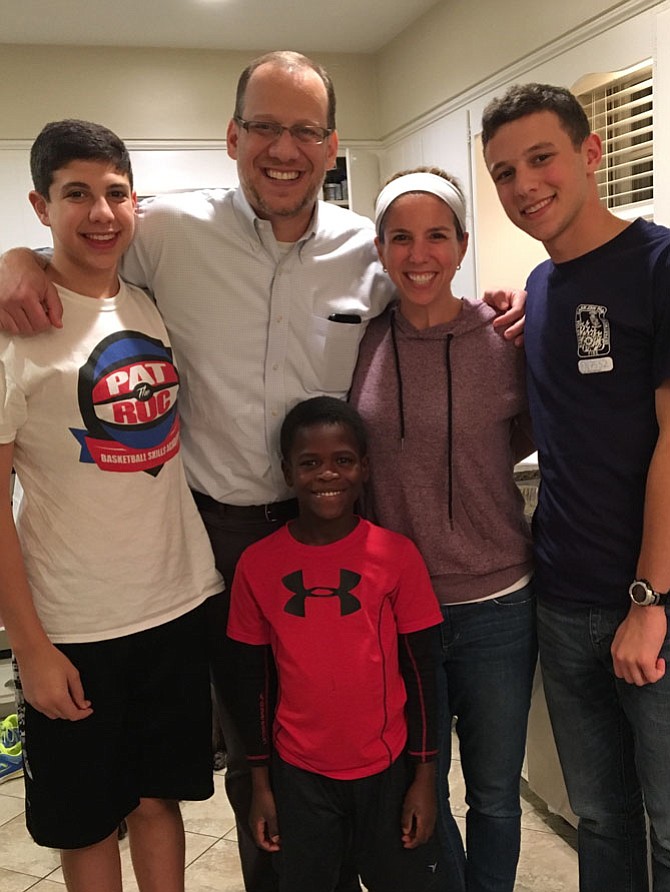 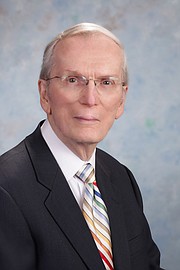 Citizen of the Year: John Sever 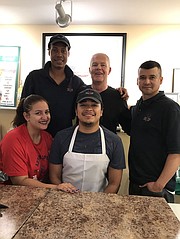 Business Person of the Year: James McWhorter with the staff of The Market at River Falls. 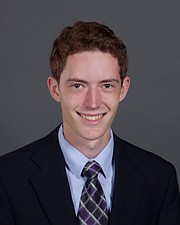 Youth of the Year: Harrison Smith

The Potomac Chamber of Commerce has selected three residents and one family who make Potomac a better place to live to honor on Potomac Day, Oct. 21. Not only do these honorees volunteer their time and talents to help the community, they give of themselves both professionally and personally in a multitude of ways. They will be featured in the Potomac Day parade and also recognized by the Potomac Chamber of Commerce on Nov. 16 at a dinner held at Normandy Farm Restaurant.

The honorees are: Harrison Smith, Youth of the Year; Dr. John Sever, Citizen of the Year; James McWorter, Business Person of the Year; and the Robert Freishtat family, the Grand Marshals of the parade.

Youth of the Year

Harrison Smith of Potomac is a senior at Bethesda’s Landon High School where he is a leader, musician, actor, athlete and scholar. The self-admitted science nut helped Landon advance to the Sweet 16 in 2017 Maryland Science Bowl and in April he was one of 18 D.C.-area students selected to take the 2017 US National Chemistry Olympiad Exam. He hopes to study engineering at Princeton, Duke or Carnegie Mellon next fall.

Ehren Federowicz, Landon’s Upper School Head, said, “While his 98.8 GPS is absolutely impressive, spending time with Harrison quickly reveals that he measures his success not by grades, but by his level of interest in learning the material. He has a thirst for understanding and not just for achievement — and he always tries to be his very best self. This ‘best self’ is a person continually concerned with the welfare of others, including his classmates. His teachers rave about his enthusiasm for assisting his classmates as they strive to understand hard-to-grasp concepts.”

Harrison is always ready to help others. Along with other Landon boys, he packages meals that are sent to those in need in other countries. He puts together Thanksgiving baskets for families in the D.C. area, and recently assembled care packages to send to victims of hurricanes Harvey and Irma. He and his family volunteer at a women’s shelter on the weekend and he joined other members of his church to rebuild homes ravaged by Superstorm Sandy. He also volunteered to build a home for a newlywed couple of limited means in West Virginia and helped repair a fire-damaged homeless shelter in Athens, Ohio.

Harrison’s extra-curricular interests are varied. He is an active member of Landon’s Chamber Singers and Bearitones, performed in school musicals, is a member of the Upper school riflery team and a leader on the outdoor track and captain of the cross-country team.

Andy Katz, Landon Senior Class Dean, said, “Harrison’s outstanding leadership in our community and his determination to be the best that he can be in all things earned him the 2017 Dartmouth Book Award, given to a Landon junior who achieves academic success and exemplifies the qualities of teamwork perseverance, honor and civility. Harrison does indeed embody all of these qualities … and does so with a smile on his face and an unmistakable empathy for others in his heart. He is truly an exemplary student and human being, and I cannot wait to see what the future holds for him.”

Citizen of the Year

Dr. John Sever has been a driving force in the eradication of polio throughout the world for many years. In 1978, he suggested that the Rotary Club adopt eliminating polio throughout the world as its primary 3-H (Health, Hunger and Humanity) program objective. At the time, Sever was the director of Infectious Disease Branch at the Institute of Neurological Disease at the National Institute of Health. Sever, a long-time Potomac resident, now resides in King Farm.

After speaking with his colleague at NIH, Dr. Albert Sabin, the developer of the live or attenuated oral polio vaccine, Sever convinced Rotary International to raise $12 million, partially funded by the Rotary’s 75th anniversary fund – and work together with clubs around the world to eradicate polio by Rotary’s 100th anniversary in 2005. In 1984, he was named by Rotary International President-Nominee Carolos Canseco to chair the Polio 2005 committee to review all current and proposed activities “related to Rotary’s goal of ensuring the immunization against polio of the children of the world by Rotary’s 100th anniversary in 2005 and to bring to the board a recommended long-term plan of action for attaining the goal.” That committee’s recommendation was that Rotary’s contribution would be to formulate expert teams to work with countries in mass immunization campaigns and to create a fund to buy the vaccine.

He said, “When we launched our program, 1,000 children were becoming infected with polio every day — about 360,000 per year throughout the world. Today, only 12 per year become infected — mostly children who live in Pakistan and Afghanistan. I’m hoping we can eliminate those cases and then, like smallpox — the only other disease to ever be eliminated from our world — we will never see this dreadful, crippling disease again.”

Sever said, “I am pleased to receive this honor and look forward to participating in the Potomac Day parade and the Chamber of Commerce dinner in November. This honor should really go to the Rotarians who have worked so hard as a partner with the World Health Organization and the Center for Disease Control and for all who raised the funds to support our mission. Rotary International has truly made a difference in the lives of so many throughout the world.”

Claude Morissette, also a member of the Rotary Club of Potomac and the Past District Governor, recommended Sever for Citizen of the Year. He wrote, “There is no other Rotarian who has been a leader in Rotary’s polio eradication like Sever. Many credit Sever as the most important force in getting the U.S. Congress to recognize and fund Rotary’s fight for their cause. He is the best example of how big ideas in Rotary can literally change the world.”

Business Person of the Year

On Dec. 22, 2014, Potomac residents James McWhorter and his wife, Yasmin Abadian purchased River Falls Market. McWhorter was the co-owner of L&M Produce. One October day, his driver called to tell him the doors at the River Falls Market where he was delivering produce were locked and it didn’t look as if the store was going to be open again. Both residents and employees were gathered outside the store and all were shocked and saddened that the popular market would be closing — but elated when they heard that it was reopening in December. That thrill and customer satisfaction has continued ever since McWhorter took it over. He retained the former employees and his customer base is bigger than ever.

“I’m having a lot of fun here,” he said. “I have a great staff and the best customers. I’m surprised and honored to be chosen Business Person of the Year and I truly appreciate the recognition. We all work hard and don’t cut corners and I’m happy the public enjoys our food and presentation.”

After he and his wife purchased the Market, they changed its name to The Market at River Falls, and redesigned and updated their space. They have also made a move to offer healthier food. All of their meats are single-sourced; in other words, they know the farm they come from and that the animals are grass-fed with no hormones or additives. He said, “We are so proud to be the only source in the D.C. area for Nora Pouillon’s blue circle salmon from Norway. All of our fish is fresh — never frozen.” McWhorter also continued to provide the popular “Cadillac” crab cakes, fresh shucked oysters, salads, vegetables, sushi, soups and more — all created by store chefs. The store also features boutique grocery items from many small purveyors. Many residents of Potomac also use the Market for catering their events and simply as a meeting place in the Village.

McWhorter served as chairman of the MDA’s Heartsong’s Annual Gala for two years, raising $2.5 million for MDA. He and his family volunteer once a month at Miriam’s Kitchen preparing and serving breakfast to the homeless. The Market at River Falls has donated thousands to Miriam’s Kitchen and donates hundreds of dollars of food on a weekly basis. Currently the vice chairman of the board of Fresh Farm Markets, McWhorter helped to establish a program called Food Prints, which teaches youths in disadvantaged areas of D.C. about growing and preparing healthy foods. He is also on the board of Coastal Sunbelt’s Foundation which donates funds to local charities.

“I thought when we bought The Market at River Falls I would be the owner and come by sometimes — but I have found I always want to be in the market meeting and greeting customers and working alongside of my staff. I enjoy the compliments we get on our foods and the happiness we bring people when they truly enjoy our market and our offerings. It’s fun — and I would do it all over again in a heartbeat.”

The Freishtat family is proud to lead the Potomac Day Parade as the grand marshals. The family is being recognized for their continued commitment to the people of Haiti. Rob Freishtat said, “I still go to Haiti several times per year as part of the medical work I do there. Despite all of the problems in the Caribbean right now due to the hurricanes (including significant flooding in Haiti), the needs in Haiti remain extreme and our focus remains on continuing to build on the progress we have made there.” Freishtat is chief of Emergency Medicine with the Children’s National Health System and professor or Pediatric Emergency Medicine and Integrative Systems Biology at the George Washington University School of Medicine and Health. His wife, Dr. Jamie Freishtat is a pediatrician in Washington D.C. She currently practices at Children’s National Medical Center for Cancer & Blood Disorders and is affiliated with The George Washington University Hospital.

The Freishtats traveled to Haiti on a medical mission after the devastating earthquake in 2010. They immediately fell in love with the country and the people, and have since saved many lives while helping care teams at the Hôpital Sacré Coeur in Milot, Haiti. During one of his trips in 2013, Dr.Rob Freishtat met an almost 2-year-old little boy named Louiken (Luke), who would change the course of his family’s life. Luke had recently been abandoned at the hospital and was suffering from severe starvation and dehydration. Over the next few days, Freishtat didn’t leave Luke’s side, as he and the care team nursed him back to health. Not only did he save Luke’s life, but after the many hours of bonding, Freishtat and his wife decided to dedicate the next three years to becoming Luke’s parents.

The Freishtats completed the long adoption process in December of 2015, and were honored by the Congressional Coalition on Adoption Institute. A member of Congress presented the family with an award, made possible by CCAI’s Angels in Adoption Program, which honors an individual, couple, or organization that makes an extraordinary contribution on behalf of children in need of homes.

Freishtat said, “Luke is an amazing kid. He just started kindergarten and is doing very well. For a kid who spoke no English less than two years ago, he has come a long way. Luke is enjoying his new family, particularly his big brothers, his new friends, classes at Bells Mill Elementary School, MSI soccer — and particularly his chocolate Lab.”

The Freishtats are active at B’nai Tzedek synagogue in Potomac and their son Nate serves as a volunteer firefighter/EMT with the Cabin John Park Volunteer Fire Department.