Things That Go Bump in the County
Votes

Things That Go Bump in the County

Photo contributed by the Arlington Center for Local History

A sketch of the Beast of Barcroft, Arlington’s most notorious cryptid. 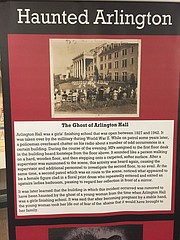 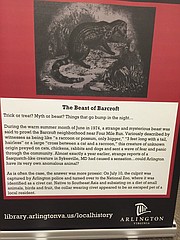 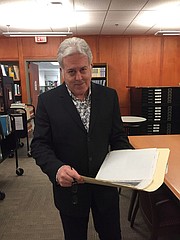 John Stanton, archivist for the Center for Local History, with the files on Arlington’s mysteries.

Arlington — Deep in the Arlington Center for Local History are a set of files. The thick set of folders contain records about the inexplicable. With varying levels of credibility, they reference everything from UFOs over Fort Myer to spectral Civil War bands continuing to play for long dead armies.

Arlington Hall is possibly the most haunted spot in Arlington. The site, built in 1927, was originally a school for young women but converted into a headquarters for the Army’s Signal Intelligence Service during World War II. Many of the reports collected by the center were from military officers on patrol late at night. Some wrote about reports of footsteps coming from empty rooms. In one letter written to the center, an army patrolman was walking through the corridors of Arlington Hall on a late night security check. The halls were lined with massive filing cabinets, too large for one person to move. He’d finished sweeping through the fourth floor and had moved down to the third floor when he heard a loud screeching noise coming from the floor above, as if someone were moving one of the cabinets. He called down to the front office to see if there was someone else in the building, but the office told him that he was alone. He went back up and checked on the fourth floor, but nothing was out of place.

One recorded haunting at Arlington Hall started with, as many others had, footsteps from the empty floor above. The military policeman called out to his supervisor, who a few moments later heard the footsteps again. The supervisor, joined by several patrol officers, started searching the building while more police were on the way. En route to the scene, one patrol outside observed a young woman in an old-style, floral print dress repeatedly walking in and out of a women’s bathroom upstairs. According to the report, the officers saw her primping herself and checking the mirror. However, by the time the patrol reached the second floor, there was no sign of the woman.

According to the center’s records, the building was originally a girls’ finishing school open between 1927 and 1942. The legend is a young woman at the school had become pregnant by a nearby stable hand. The woman took her own life out of fear that her pregnancy would shame her family.

“The Arlington Hall stories are a favorite,” said John Stanton, an archivist for the Center for Local History. “There’s these universal themes of a tragic and a romance. It’s very gothic. It’s not something fantastical, it’s something that happens in real life, something we can all relate to.”

More hauntings are scattered throughout the county.

At 5713 S. 4th Street, the Glencarlyn Recreation Center was once the site of a local tavern. The center’s records note stories of a fiddler who was killed in a drunken brawl and still haunts the site to play his tunes.

But development in Arlington might be driving some old spirits away. The center’s archives include reports of a frequent haunting near the Overlee Community Pool. As a nearby Victorian home was being razed as part of the pool renovations, The Washington Examiner reported in 2012 that a construction worker saw a little girl dressed in Victorian garb peering out of one of the windows. When the man went inside, he saw the girl sitting on the stairs to the basement. He turned around, and when he turned back the girl was gone. According to legend, the girl was Margaret Febrey, who died unexpectedly in the home at age 14 in 1913. The center’s archives indicate the girl’s presence at the site is a well established local phenomena.

One of Arlington’s most macabre stories contains no known supernatural elements, but was also brought to life with a development revealing a home’s dark secrets. While vacationing in Bavaria in the 1930s, local obstetrician and gynecologist Dr. J. Bay Jacobs saw a dark castle they admired so much that they decided to transform an Arlington property into a replica. Their Rosslyn home on a bluff overlooking the Potomac was built in the lavish style of a European castle. After Jacobs’ death in 1988, the house changed hands a few times before ultimately being demolished 1994. But as the building was being demolished, construction workers at the side discovered the body of a stillborn baby tucked away into one of the walls. Jacobs’ son explained that his father once had several deceased children stashed throughout the house as teaching tools. Jacobs had disposed of most of the bodies shortly before his death, but his son explained that he “must have overlooked one.”

Arlington has more than ghosts haunting its dark streets. Trick or treaters wandering near Four Mile Run might want to keep an eye out for a three-feet long creature stalking local cats and dogs. The so called “Beast of Barcroft” was first spotted in 1974 near Four Mile Run, described as “a raccoon or possum, only bigger,” or as a large hairless cat. Police were called to the scene and eventually a creature was captured, a civet cat native to Southeast Asia that appeared to have been an escaped pet. The creature was handed over to the National Zoo, ending the short-lived reign of the Beast of Barcroft.

Over the years, the number of mysterious sightings and stories has been on the decline. Stanton says the most recent craze of supernatural phenomena was UFO spotters in the 1950s and 1960s. Stanton said Fort Myer was particularly a hotbed of sightings, but the stories weren’t the classic alien abductions or mutilated cows. Most were reports of lights in the sky, with booms or movements at impossible speeds.

“Arlington is so populated and built up, it’s not the rural farmland it once was,” said Stanton. “But these stories still help people cope with uncertainty. It’s part escapism, sure, but if we can face imaginary horror, maybe we can confront something real in our lives.”