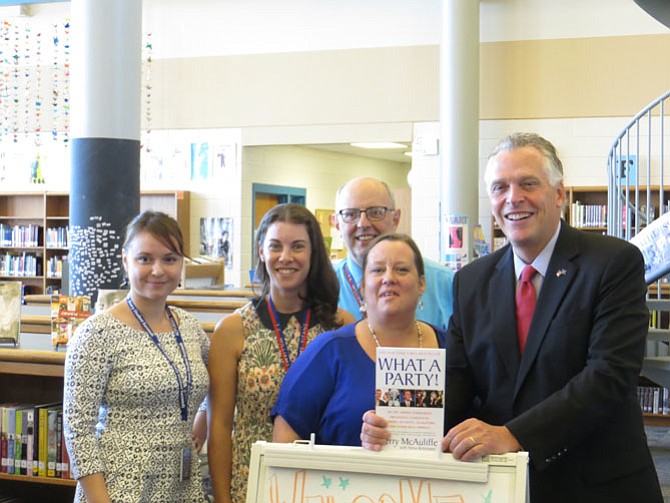 According to Superintendent Dr. Alvin Crawley, the program is designed for students who are new to the country. 2016 marked the first year a class graduated from the international academy. The graduation rate was largely assisted by the 2016 implementation of the ACT WorkKeys Reading for Information test as a substitute for the Standards of Learning (SoL) test.

According to Joan Wodiska, a member of the Virginia Board of Education, the change is a small one that has made a large impact on the lives of students.

“The SoL was creating a barrier to graduation,” said Wodiska. “Early this winter, students came to the state board and shared stories of sitting for the SoL 5, 6, or 7 times and being unable to pass. That test was standing between them and a diploma. WorkKeys offers a rigorous, high standard, but one that removes cultural colloquialism and prepares students for workplace readiness.”

Wilmer Gonzalez, from Guatemala, graduated from the International Academy earlier in 2016. Gonzalez and Yenmy Gabriella Martinez, a current student from El Salvador, spoke to the governor and visiting officials about their experiences in the program.

In his home country, Gonzalez said he’d had to stop going to school at 12 to work at a construction job. After a hard journey, Gonzalez eventually joined his father in the United States. On his first day at TC, Gonzalez said he was overwhelmed because he didn’t speak English. But Gonzalez said teachers reached out to him and helped him learn the language. Gonzalez spent four years in the International Academy, but still found it difficult to pass the writing SoL, even after five tries. He received a letter at home saying that if he did not pass the SoL, he would not be able to graduate. Gonzalez hid the letter from his family because he was afraid they would worry. But when the WorkKeys test was accepted by the Virginia Board of Education, Gonzalez was able to pass the test. He said it was still difficult, but the WorkKeys only requires students to write a three-paragraph essay rather than the SoL standard five.

McAuliffe praised the School Board for its acceptance of the WorkKeys test as an SoL substitute and praised the students for their hard work in the classroom.

“We visited two international academy classes, and it was truly incredible,” said McAuliffe. “Not all students in the Commonwealth have the opportunities these students have. Very few schools in the country are doing what we’re doing here.”

Many of the students in the classroom were quiet, many still learning conversational English, but others expressed enthusiasm for the International Academy program and life at TC.

“It’s great,” said Mohammed al Hajjar, “We get to learn about all different languages and cultures.”