Chief of Police Cook reflects on his service to his city. 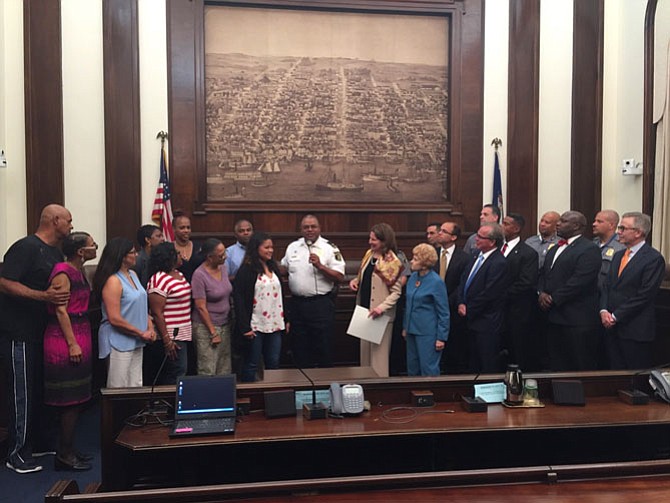 The Alexandria City Council presented Chief Earl Cook with a proclamation on Sept. 13 recognizing his service. Photo by Vernon Miles.

For as long as he can remember, Chief of Police Earl Cook wanted to be a police officer. At the end of September, Cook will retire and go back to being a civilian for the first time in 37 years.

“It was something I’d wanted to do since elementary school,” said Cook. “I grew up across the street from a police station. I saw police all the time, but nobody walking in and out looked like me.”

After graduating from Duke University, Cook returned to Alexandria to join the police academy in 1979.

“He could have gone anywhere,” said former Mayor William Euille, who grew up in public housing near Cook, went to elementary through high school with Cook, and ultimately appointed him chief of police, “but he chose to come back home to join the police department. He’s very strongly attached to police work and to his hometown.”

“There’s an affection for your hometown that you can’t replicate,” said Cook. “I’ve seen Alexandria, from segregation to today. That allows you to be proud of the developments you’ve seen.” 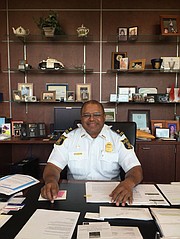 After Cook graduated from the academy he worked in patrol and criminal investigations until 1989 when he began to climb through the ranks — from sergeant to assistant chief in six years. In 2006 he became executive deputy chief, and then in 2009 was appointed chief of police when the former chief, David Baker, was arrested for drunken driving.

“Frankly, that was a challenging time,” said Euille, who was mayor at the time of Baker’s arrest. “I’d worked with Chief Baker and now Chief Cook closely, and we were looking for someone who could bring stability and continue along the same pathways with progress that Chief Baker had begun to implement. We were also looking for an insider, because we didn’t want to go through that whole process. We wanted someone who was respected in the department and in the community. Earl [Cook] was Chief Baker’s deputy. It was a logical choice. It was the right choice.”

Cook said that at the time, the suddenness of the change was the only part that felt unique.

“At that time, I had already been in senior command,” said Cook. “I saw goals year to year, and there was a continuity from one role to another. The circumstances were not optimal, but you just have to take a few deep breaths and keep going.”

Many sources, including the city website, cite Cook as being the city’s first African-American Chief of Police. Euille said that’s not completely accurate.

Since 2009, Cook has overseen several major events from the Alexandria Police Department, from moving into a new department headquarters on Wheeler Avenue to arresting serial killer Charles Severance. Cook said he was prepared to handle the day-to-day operations when he took over the job, but that the biggest change was feeling the full responsibility of the position.

Cook said the most challenging parts of those jobs come from those two pressures: when the safety of a police officer is compromised and when poor communication leads to a negative engagement with the public.

“The death of officers is the hardest part,” said Cook. “We had some line of duty deaths and some suicides. The most challenging part is trying to get through police shootings. It’s complex and someone has lost their lives. As chief, you try to maintain the integrity of your officers and for the person who lost their life. In terms of mistakes, there’s few situations I didn’t learn from. Looking back, there’s not glaring mistakes, but there are things I could have done better. Usually that’s in areas of communications.”

While Cook was chief of police, the national discussion about racism in police departments came to the forefront.

“When you see that change at a national level happen, you feel the horror of something you can’t explain,” said Cook. “But like Paul Harvey, you have to wait for the rest of the story. There are broader questions, but you have to look at your local agency rather than judge police as a whole. You have to look at what’s happening locally. What are we doing? Try to communicate, and don’t be angry at your police unless you have a reason to be.”

Cook says Alexandria’s community policing focus has been crucial to maintaining order and social cohesion during the turbulent national discussion. Aside from the temporary chief of police Euille referenced, Cook was the first permanent black chief of police, but Cook said he never felt divided between those identities.

“I don’t feel torn between black issues and police issues,” said Cook. “I see no special uniqueness about being a black cop or a white cop. You have to look at police, and people, as individuals. I don’t think of being black and being police as separate entities … it is part of being American.”

While Ferguson and Baltimore became epicenters for national unrest following the deaths of young black men at the hands of police officers, Cook says the police department’s history of community involvement has played a large part in keeping that conflict out of Alexandria.

“Community policing is not program specific, you have to build it with the community,” said Cook. “We’ve been doing that for 30 years. We’ve been doing things like the citizen’s police academy for two decades.”

Euille agreed, saying that the department’s focus on community policing has been an important part of Alexandria’s relationship with the police.

“The reason we haven’t seen tensions here like we did in Ferguson is that Alexandria is a community that prides itself on working together as a community,” said Euille. “We have close relationships with a diverse police department that comes close to representing the demographics of this city. Those are values people reflect on. Police are accessible and go to every community civic association.”

Cook says he understands and sympathizes with individuals who have been victims of police brutality but urged citizens to assess their local police departments on an individual basis rather than as part of the national discussion.

“Police behaving badly, we have to stop that,” said Cook. “But cops are not doing this to black people, individuals are. You cannot condemn the profession for what individuals do.”

As the department continues to move forward, Cook says he believes the big challenge that faces his successor will be the evolution of technology.

The change Cook says he’s most nervous about is the change in weaponry.

But on a day-to-day basis, Cook says technology will change how people communicate, and he’s not sure that change is for the better.

“Face-to-face interactions will always stay our bread and butter, but it’s easier to interact more online,” said Cook. “That changes the interaction through. You can’t feel for them as a person through a screen. It’s hard to build that human connection.”

As the city begins to look for a new chief of police, Cook says the city’s decision of whether to hire internally or hire externally will say something about the direction they want the department to go.

“We’re a factory for good police chiefs here,” said Cook. “A new chief has to be tailored to the community, so the city has to decide what it wants. Are we hiring some people as a change element or to root into longevity. We have to decide what the city is looking for in terms of stability or change.”

Cook says the next chief will also have to be comfortable engaging with the public.

“That person will need to be able to focus on a very involved citizenry,” said Cook. “Quality of life is often a major concern here.”

Cook says the thing he’ll miss about being chief won’t be the work, but the people at his office.

“I’ll miss the people here,” said Cook. “That’s going to be my first adjustment, not coming in and being around all these wonderful people. I’m going to miss being around such a positive environment. People think police life is all angst, but that’s not the atmosphere here.”

As for his personal life, Cook says he’s not sure what’s coming up next.

“I had a plan, the decision to do this was made years ago,” said Cook. “I foresee working, but when you’ve been doing one profession for a long time, all of your attention and focus is on that. I wasn’t looking for anything in my life other than being chief of police. Now I need to look at what I want the last third of my life to look like.”