With a national dialogue underway on the appropriateness of Confederate flags and imagery, some Alexandrians have begun questioning whether the Appomattox statue to Alexandria’s Confederate dead should remain on Prince Street.

The Appomattox statue on Prince Street was proposed in 1885 by Edgar Warfield, a former Confederate private, to honor the Alexandrians who had died fighting for the Confederacy. John Elder, an artist from Fredericksburg, submitted a statue design based on the the soldier in one of his paintings. The dedication ceremony was held on May 24, 1889.

“The laudable idea, conceived a year or two ago, of erecting a suitable monument to perpetuate to the memory of those of the historic Seventeenth Virginia regiment who yielded their lives during the four years’ of civil war … culminated today in the unveiling at the intersection of Prince and Washington streets of a memorial in their honor which would do credit to any city,” said the Alexandria Gazette in a the evening edition on May 24. According to the article, the event drew a large crowd of local residents and visitors from across the state. Also in the crowd were the children and grandchildren of the soldiers who had died in the Seventeenth Virginia regiment.

“War, to a large percentage of the present generation, is only known through history,” said the article. “They were either either unborn or [too] young to have witnessed the terrible fruits of carnage or to have realized the self-abnegation of men who voluntarily shouldered their muskets in defense of what [they] sincerely believed to be sacred.”

Today, the Appomattox statue is maintained by funding from the Mary Curtis-Lee-17th Virginia Regiment Chapter of the United Daughters of the Confederacy and receives no city funding. However, the topic of the statue’s removal was recently raised during the mayoral race. When asked what his greatest regret was while in office, Kerry Donley answered that he wished he had taken the opportunity to move the statue after it was damaged in a traffic incident at the site.

Recently the conversation about the statue has resurfaced following a racially motivated shooting on June 17, 2015, at the Emanuel African Methodist Episcopal Church in Charleston. After a controversy regarding the Confederate flag’s prominence on a memorial outside the Statehouse, Confederate iconography throughout the south has been a topic of discussion. In Richmond, the Jefferson Davis monument was spray painted with the message “Black Lives Matter.” In Alexandria, many of these discussions revolve around the flying of the Confederate Flag on Lee-Jackson Day, the naming of the Jefferson Davis Highway, and the statue on Prince Street. 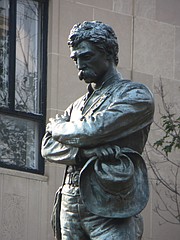 “I’ve asked city staff to come back to City Council when we reconvene in September, after taking a break, to look at the rules, regulations, and policies so that City Council and the community can have a frank and honest discussion on changes we choose with regards to statues, names of buildings, street names,” said Mayor William Euille.

While attending T.C. Williams High School in the mid-1960s, Euille said he was part of a protest at City Hall attempting to have the statue removed.

“We demanded and called for the removal of the statue; to put it in a park,” Euille said. “This debate took place after the assassination of Robert Kennedy and Martin Luther King. People looked at it in terms of racism and that changed needed to happen. We lost that battle, but we compromised at the time. All these years later, it still has a sting to it and that resonates at the moment.”

The compromise was that the amount of time the Confederate flag was flown at the site would be minimized. Years later, while Euille was on the City Council, the flag was removed entirely. However, as the discussion has shifted towards the statue itself, Euille is a little more wary of discussing its removal.

“As a resident of the city, it’s not something I’d like for the city to have on display, but it’s part of the city’s history,” said Euille. “I don’t want us, as a community, to overreact just because there’s a call throughout the nation in terms of what should be and shouldn’t be in representing the Confederacy.”

Removing the statue also presents a substantial legal challenge. The Virginia statute concerning Memorials for War Veterans clearly states that removing a memorial to any major war or conflict would be unlawful.

“If such are erected, it shall be unlawful for the authorities of the locality, or any other person or persons, to disturb or interfere with any monuments or memorials so erected, or to prevent its citizens from taking proper measures and exercising proper means for the protection, preservation and care of same. For purposes of this section, ‘disturb or interfere with’ includes removal of, damaging or defacing monuments or memorials, or, in the case of the War Between the States, the placement of Union markings or monuments on previously designated Confederate memorials or the placement of Confederate markings or monuments on previously designated Union memorials.”

Vice Mayor Allison Silberberg said that she and members of the City Council would reflect on the mayor’s call for Confederate imagery’s place in the city to be reexamined. While Silberberg actively supports the city not flying the Confederate flag on Lee-Jackson day and said she would support state Sen. Adam Ebbin in his effort to have Jefferson Davis Highway renamed, Silberberg was more hesitant on outright removing the Appomattox statue.

“I would support moving [the statue] to the Lee-Fendall property if they would accept it,” said Silberberg. “The move would make sense.”

The Lee-Fendall house, once owned by the family of Robert E. Lee, is currently a historic museum.

However, the 1889 Gazette article states that the location at Washington and Prince was chosen exactly because of its conspicuous nature in the city. The 1888 City Council approved the statue’s placement at the intersection of Washington and Prince streets, the point at which many of the Alexandrians had met and left the Union-occupied city to fight for the Confederacy.

The dedication at the May 24 ceremony was delivered by Virginia Gov. Fitzhugh Lee, formerly a major general of cavalry in the Army of Northern Virginia and a nephew of General Robert E. Lee. Fitzhugh Lee spoke at the event in defense of his uncle’s legacy and that of the dead Confederate soldiers. Fitzhugh Lee recalled that George Washington and his troops, like Lee, had once been described as rebels and outlaws, and said that Alexandria cannot cling to the legacy of one while rejecting the other.

At the dedication, Captain R. Travers Daniel, visiting from Richmond, recalled memories of many of the soldiers whose names were on the monument.

“William T. Morrill, gentle, modest and brave, [a] sergeant of the old Seventeenth Virginia, was riddled with bullets at Seven Pines while bearing the Southern standard far to the front of his line of battle,” said Daniel.

J. Lance Mallamo, director of the Office of Historic Alexandria, said that it’s important to remember that the statue is dedicated to 100 Alexandrians who died in the war. At a time when the city had a much smaller population than it does today, Mallamo said that left a major impact on many of the local residents. Furthermore, Mallamo said the message of the statue has a deeper meaning than just commemorating the Confederate dead.

“It expresses the uselessness of war, that’s what I always see when I look up at it,” said Mallamo. “We’re living in difficult times, but I think there’s a lot to be learned by looking up at the expression on that soldier’s face.”

At the unveiling ceremony, a prayer was offered by Rev. G. H. Norton, a chaplain who served the local confederate camp.

“May the memory of our departed heroes inspire us with patriotic devotion,” said Norton. “May all hatred and strife be buried in their graves.”