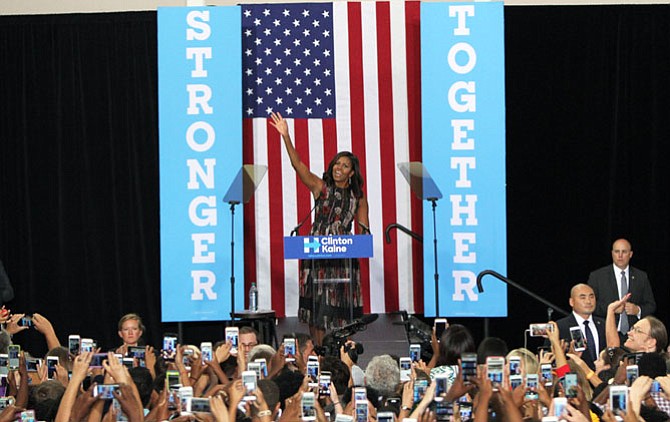 Audience members capture the event on their cellphone cameras. 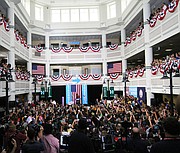 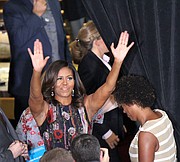 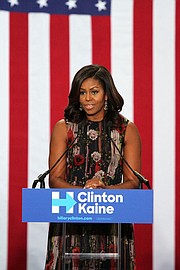 Excitement filled the air when First Lady Michelle Obama addressed an enthusiastic crowd, last Friday, Sept. 16, at GMU’s Johnson Center. Speaking on behalf of Democratic presidential candidate Hillary Clinton, she urged everyone to vote and called Clinton the only qualified candidate in the race.

“This job is hard, and the issues that cross a president’s desk are never easy or black and white,” said Obama. “So we should demand a president who’s going to take this job seriously, study and understand the issues and have superb judgment. We need someone who’s steady and measured — because when you’re making life-or-death, war-or-peace decisions, a president can’t just pop off.”

She said what’s needed is a compassionate and unifying person who’ll be a role model for children — “Someone who’s not just in this for themselves, but for the good of this country. The presidency doesn’t change who you are; it reveals who you are. And the same is true of a presidential campaign.”

“If a candidate is erratic and threatening, traffics in prejudice, fears and lies on the trail, has no plans to implement their goals, if they disrespect their fellow citizens — including folks who’ve made extraordinary sacrifices for our country — that is who they are,” said Obama. “That is the kind of president they will be.”

“A candidate is not going to suddenly change once they get in office — and at that point, it’s too late,” she said. “They’re the leader of the world’s largest economy, the commander in chief of the most powerful military force on earth. With every word they utter, they can start wars, crash markets, change the course of this planet.”

IN THIS RACE, said Obama, only Clinton can be trusted with these responsibilities and has the qualifications and temperament for the job. “We’ve seen her character and commitment over the course of her entire life,” said Obama. “After law school, she advocated for kids with disabilities, and for quality childcare as a senator; and she fought for children’s health care as first lady.”

She also said Clinton is one of the few people in the world and, “clearly, the only person in this race who has any idea what this job entails. And she believes she has an obligation to use her many talents to help as many people as possible. That is what dedication and love of country look like.”

“Hillary has been a lawyer, a law professor, first lady of Arkansas, first lady of the United States, a U.S. senator and secretary of state,” continued Obama. “I’m inspired by her persistence and consistency, by her heart and her guts, and by her lifelong record of public service. No one in our lifetime has ever had as much experience and exposure to the presidency — and, yes, she happens to be a woman.”

At that point — as it did several times during her speech — the smartphone-wielding, photo-snapping crowd erupted into loud applause. But there was more. Obama said being president isn’t anything like reality TV.

“It’s about whether the candidate can handle the awesome responsibility of leading this country,” she said. “Ask yourself which candidate has the experience, maturity and demeanor to handle the job. Which candidate’s words and actions speak to the future we want for our country? And who has the values we share, like inclusion, opportunity, service and sacrifice for others?

Obama also warned the crowd that elections aren’t just about who votes, but who doesn’t. “And that’s especially true for young people like you,” she said. “In 2012, voters under age 30 provided the margin of victory for [President] Barack [Obama] in four, key, battleground states, [including] Virginia. And without those votes, he would have lost the election.”

BUT IT’LL TAKE EFFORT, said Obama. “It’s not enough to come to a rally; you also have to register to vote and then come out and vote,” she said. “Roll up your sleeves and get to work; knock on doors, make calls and get people out on Election Day.”

“At a time when incomes are rising by thousands of dollars, when millions of people are being lifted out of poverty, is now the time to change direction?” she asked. “Americans are fundamentally good folks and want the same things. We [believe] you work hard for what you want in life and don’t take shortcuts, and you treat people with respect, even if they look or think differently from you.”

“When someone is struggling, you don’t turn away or take advantage,” continued Obama. “You do what you can to help, because that’s what we do in America. We live in a country where a girl like me, whose great-great-grandfather was a slave, can go to some of the finest universities on earth — and where a biracial kid from Hawaii, named Barack Obama, the son of a single mother, can become president.”

She said this nation deserves a president “who can see those truths in us, who believes each of us is part of the American story and [that] we’re stronger together. We deserve a president who can bring out what’s best in us — our kindness and decency, our courage and determination, so we can keep on passing down those blessings of liberty to our children.”

“Hillary Clinton will be that president,” she said. “So from now until November, I’m going to work as hard as I can to make sure Hillary and Tim Kaine win this election, [but] I need your help. Virginia will make the difference in this election. Are you ready, Virginia?”