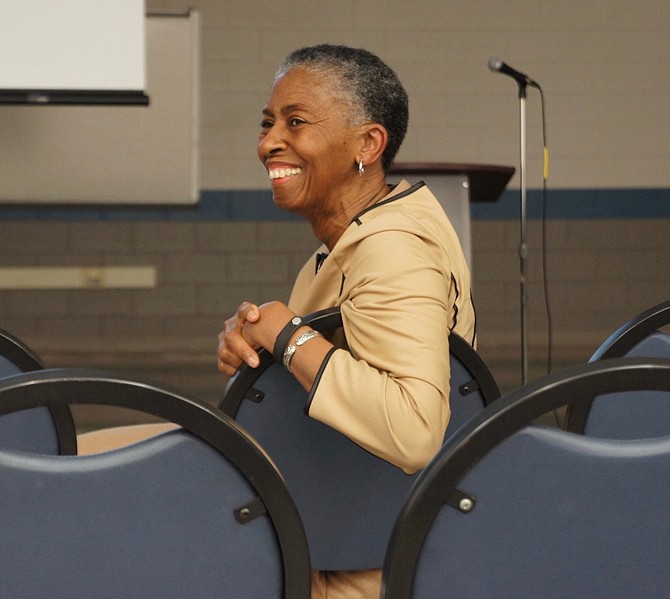 Fairfax County Supervisor Cathy Hudgins (D-Hunter Mill) said she would have liked to see a larger crowd at the meeting, but sometimes a smaller group makes it easier to make connections. Photo by Andrea Worker. 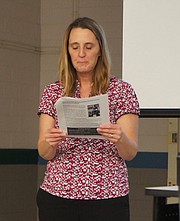 Dr. Lisa Sturtevant reads a series of vignettes, illustrating the extent, and potential harmful impact, of the affordable housing dilemma and leads a discussion with the attendees.

Contributed by Fairfax County Department of Housing and Community Development

At the county-wide Housing Community forum, county staff provided graphs showing the breakdown of wages in the county.

The turnout was pretty small, considering the topic, but those who attended the county-wide Housing Strategic Plan meeting at South Lakes High School, led by the Department of Housing and Community Development and hosted by Hunter Mill District Supervisor Cathy Hudgins, made up for the lack of numbers with their attention and their engagement in the discussion.

The April 17 meeting was in competition with the joint Town Hall event of state Sen. Janet Howell (D-32), and Del. Ken Plum (D-36), as well as several other public meetings taking place simultaneously around the county.

“It was our first go,” said Vincent Rogers, director of Policy, Reporting and Communication for the sponsoring Fairfax County government agency. “We will do everything we can to get the word out to the public for future meetings. This is an issue that really does affect us all.”

Rogers explained that his department has been tasked by the Board of Supervisors to develop a strategic plan to tackle the problem. “No one wants another plan that sits on a shelf,” he said. The goals for this strategic plan are concrete. It must not only “create a shared community vision of how housing supports local economic growth and community sustainability,” but also “quantify the housing needed to sensibly accommodate future growth, develop specific, measureable, and actionable strategies for meeting the goals, and identify the programs and policies, and specific funding sources that will be required to address housing needs in 5, 10, and 15 years.”

Rogers feels confident that the county staff working the problem are up to the challenge. The county will build on work already done: The Strategic Plan to Facilitate Economic Success, last year’s county Human Services Needs Assessment that compiled and analysed the data on who in the county is in need of social services and what those service needs are, and the One Fairfax Resolution that “directs the development of a racial and social equity policy to ensure all individuals in Fairfax have an opportunity to reach their highest potential.”

But even all of the previous work, and the dedication of the county staff to solving the problem, will not be enough, said Rogers. He and his group will be engaging with nonprofits and faith-based groups. They will also take the issue to the business community for their input, since “no local workers can ultimately mean no local work.”

And then there will be more meetings like this one, aimed at educating the community as to the depth and extensive nature of the problem, and asking for residents to pitch in with their thoughts. As Hudgins said, “This is not a county plan. You are critical to the creation and success of the plan.”

THE ATTENDEES SEEMED prepared to accept their responsibilities, but even some among them confessed to not knowing the extent of the problem. Consultant Lisa Sturtevant, Ph.D., and president of Lisa Sturtevant & Associates, LLC, has been contracted to help guide the process. She helmed most of the presentation, and used a series of vignettes as case studies to illustrate the needs, and the potentially devastating effects of failing to find an answer to the housing crisis.

The vignettes not only personalized the issue, but offered some possible consequences if those described in each narrative failed to secure affordable housing in the community.

“Especially when you look at each one as representing dozens, if not hundreds, of people in the same situations throughout the county,” she said. The stories were fictitious, but based on real-life people and situations.

In one scenario, Sturtevant spoke about “Patrice Markham” who was a licensed practical nurse earning $48,500 a year and working at INOVA at a job she loved. In order to afford decent housing in a safe neighbourhood, “Markham” currently lives in Stafford, but the hour and a half commute each way every day has made her consider leaving INOVA for a job closer to home.

Another vignette focused on a millennial worker. A recent college graduate earning $50,000 as an analyst in the Tysons area, this young woman has accumulated $40,000 in student loan debt. A friend recently moved to Memphis where the cost of living is lower and she is thinking of moving, too, so that she can afford to live on her own, and consider owning her own home in the future. This particular case had several audience members commenting that Charlotte, N.C., seemed to be a hot destination for many of the young workers in their families or among their acquaintances.

The two-income “Park” family have good jobs and together earn $118,000 per year. With a new baby to consider, they wanted to stop renting in Herndon and buy their own home somewhere in the area that they now consider home base. Having a hard time finding something that they can afford without over-stretching the budget, the “Parks” are talking about moving back to Seattle where they have a better chance of finding affordable housing, and where family can help with the newest member.

“So, you are starting to see the common consequence, and what it could mean,” Sturtevant said. Losing talented workers and good neighbors is not the way to sustain a diverse, economically healthy and happy community. “Where the work pool goes, so go the employers,” she said.

She also offered scenarios that included couples ready to downsize, or even those older residents who want to stay in the community that they know and in which they have their roots, but need to leave the four-bedroom house behind in order to age in place.

That was a circumstance that had several in the audience nodding in understanding. The loss of too many people in this age group was of particular concern to Kerrie Wilson, who works for Cornerstones, the Reston-based nonprofit. “People who have retired or are near retirement are the backbones of many nonprofits and faith-based service organizations through their volunteering. So much gets accomplished in the community because of these volunteers.”

Sturtevant also presented narratives about the housing needs of public and health sector workers, like teachers and law enforcement personnel, as well as the many residents who work in retail, restaurants, and other service positions. “Did you know that there are nearly 150,000 workers in Fairfax County earning less than $30,000 a year?” she asked. “And they are working hard and doing their best.”

THE VIGNETTES, coupled with slides and graphs provided by the county, illustrated an issue that touches all sectors of the populace, young and old, below-poverty level earners and households above the mean average income for the region, in jobs as diverse as their backgrounds, ethnicities and religious beliefs.

“That’s why we need all of you, all of us, working together to keep our community strong and growing,” said Hudgins as she thanked the attendees at the close of the session.

The county will be holding more public forums as it heads toward its goal of producing a strategic plan for review by the end of the year. A website dedicated to the issue and keeping residents informed of future meetings and progress should be up and running shortly. Visit www.fairfaxcounty.gov/rha.