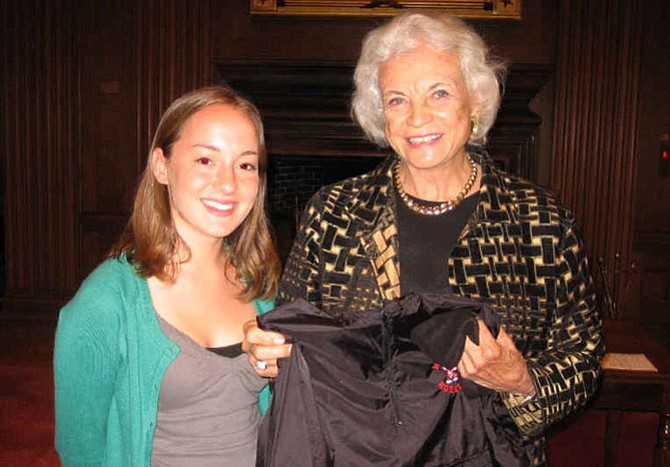 Morgan Findley, Herndon High School Class of 2008, kept this photograph of herself and Justice Sandra Day O'Connor, the first woman to serve on the Supreme Court of the United States. The photo was taken on a field trip Findley took part in as a student in Douglas Graney's political science class. "I will always be indebted and grateful [to him]," Findley writes to the Connection. Graney cites in his book that since he had met Justice O'Connor before this meeting, he was hoping she’d give him a big hello like they were BFFs, so the kids would be impressed. Instead, her first sentence was, "So, what do you kids want to talk about?" Photo courtesy of Morgan Findley 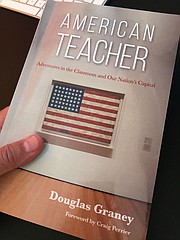 "American Teacher" chronicles Douglas Graney's career as a political science teacher at Herndon High School, including the years from 1994-2012 when he created and ran the largest intern placement program ever on Capitol Hill.

Douglas Graney is a National Board Certified Teacher and author of the newly released book, "American Teacher, Adventures in the Classroom and Our Nation's Capital." Graney teaches at Herndon High School. His first book signing is at Jimmy's Old Town Tavern, 697 Spring St., Herndon on Sunday, Aug. 13, 5-7 p.m.

When Douglas Graney went off to college, he had one goal: earn a degree in broadcasting so four years later he would set the sports world on fire as an announcer. It didn't happen, not even close, at least for the sports world. Fast-forward a couple of decades.

Circumstances prevailed. Plans changed. Graney is a National Board Certified Teacher with more than 30 years of classroom experience, the past 13 years spent at Herndon High School teaching political science. Graney is also the published author of “American Teacher, Adventures in the Classroom, Foreword by Craig Perrier.”

Kyle O’Connor, the Former Special Assistant to the President and Deputy Director of Speechwriting for President Barack Obama, was a student of Graney’s. O’Connor reviewed the book and wrote, “Mr. Graney’s class changed my life. His knowledge of history and love of debate taught thousands of other students and me the importance of active citizenship. And his belief in the power of real-world experience — combined with sheer stubbornness — opened doors for us that we could never have walked through on our own.”

ON SUNDAY, AUG. 13, from 5-7 p.m., Jimmy’s Old Town Tavern, located at 697 Spring St. in Herndon, hosts a book signing and sales celebration for Graney and his newly released book published by Mascot Books in Herndon. A limited number of books will be available for the Sunday, Aug. 13 signing, but additional copies can be ordered.

Graney shared with the Connection: "I hope to see many students (and their parents) from the early ’90s up through students I had last year. That would be a nice reunion. I’m also honored that Dr. Scott Brabrand will be attending the book release party. We were colleagues for many years at Herndon High, and I'm thrilled that he is now Superintendent of FCPS. And the fact that the book release party is taking place is doubly special. First of all, Jimmy's is in Herndon, so that's great. Secondly, Jimmy's is a Buffalo-themed establishment, and I earned my undergraduate degree at Buffalo State College. And they have great wings there!"

“American Teacher” is an autobiographical account of Graney's career as a political science teacher at Herndon High School. Through field trips, presentations by guest speakers, and other events such as rallies and political dignitary funeral visitations, Graney acts as an agent for change within the classroom, Herndon High School, and the wider community and society as a whole. Graney tells how he inspires and challenges all his students, gifted, average, and those just getting by, to become change agents themselves, in other words, respectful leaders. These are lifelong skills, sought after in today’s executive boardrooms, nonprofit organizations, and political fields.

In one of the opening chapters, Graney recalls that before teaching at Herndon High School, his early teaching career was a "trial by fire."

"I experienced the 'Sunday Night Freakout’,” he writes, referring to trying to be prepared for all his classes. It put a dent in his social life, but it forced him to be creative "…to think of my teaching career as a performance, to try to make lessons interesting, controversial, funny, relevant, meaningful, and powerful to a secondary student. This may be a simplification, but I wanted to be the teacher I would have wanted to have when I was a student. I’m still on that road.”

Graney explains that when he was first hired to teach political science at Herndon High School, he created his own course, from the ground up. "During the first semester, I would design and teach units of my choice usually related to upcoming field trips... Perhaps FCPS had a curriculum laid out somewhere, but I never bothered to look."

Graney goes on to tell how for the next 13 years he motivates students. In the classroom and on field trips, Graney models for his students characteristics necessary to become catalysts for change: the willingness to search for facts, confidence, patience yet persistence, the ability to ask tough questions, and respect, always respect. He even creates what "would be the largest intern placement program on Capitol Hill," as Craig Perrier writes in the book's foreword. "The program continues to this day....the effort it took to make his vision a reality is a testament to Doug's dedication to his students and a model of conviction that refutes any claim of the ineffectiveness of our nation's public schools."

Morgan Findley, Class of 2008 reports, “Beyond teaching students about how our government functions and how to conduct respectful political dialog and debates, Mr. Graney taught me the inherent importance of civic responsibility. He encouraged his students to be informed, compassionate citizens. I will always be indebted and grateful.” Frank Wolf, former Member of Congress for 10th District, writes in his review of Graney's book, “Whether it was engaging with students on the Declaration of Independence and the Constitution, or the hot button issues of our time, Doug’s students were a vigorous experience. Many of these students would become the best interns I ever had.”

"Douglas Graney is an educational inspiration,” says spokesperson for the Herndon Education Alliance, Ellen Findley. “Mr. Graney teaches students to think differently and shape inquisitive, thoughtful questions formulated to solicit detailed answers from American political leadership. His enduring impact in the community goes beyond the classroom, prompting his students, their parents, co-workers, and politicians to broaden their thinking and understanding of American government."

To set up an interview, reading, signing, or for information regarding “American Teacher,” contact Doug Graney at drgraney@fcps.edu.