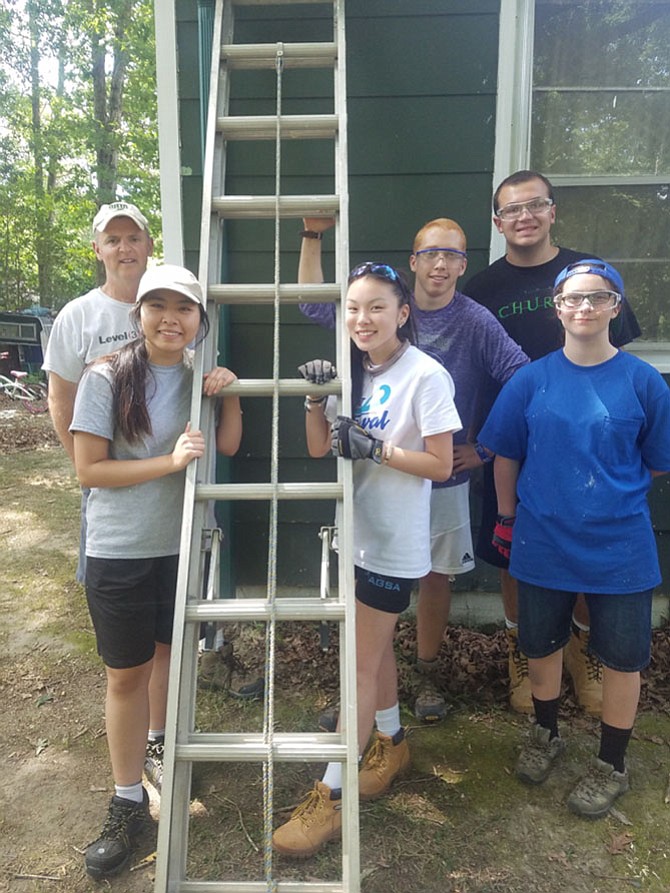 Lily McIntire to right of ladder with crew members at the Diocese of Arlington’s WorkCamp 2017. 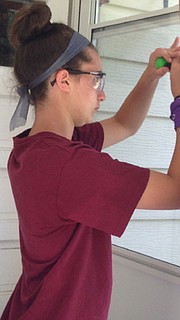 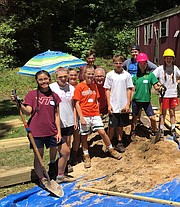 Rory Cameron from Arlington took off with a fleet of mini vans on June 24 where he was headed for a week of WorkCamp with the Catholic Diocese of Arlington. Lily McIntire changed into her white shirt with the blue motto for this year "I Will Love" stamped on the back. She headed for the prayer circle before taking off on Sunday afternoon.

WorkCamp began 29 years ago with 18 teens in one parish. In 2017 there were 820 teens and another 400 adults working on 190 projects to make homes warmer, safer and drier for those in need. Kevin Bohli, director of the Diocese of Arlington's Office of Youth Ministry, says the projects are always within the boundaries of the diocese, which includes 21 counties and seven cities in central and northern Virginia.

"We want our teens to understand you don't have to travel a long distance to find poverty or to help those in need. Service begins right here at home," Bohli said.

Cameron worked this year in a trailer park to build a new deck with a wheelchair ramp for an elderly woman who had trouble getting out. The first day they took out several big bushes and "our leader had us save all of the flowers and move them." The next day they started building the deck. "Measuring was critical in building the framing for the deck so when the ramp is connected it would fit right," he said.

Cameron says the teenagers get tool training before they participate in WorkCamp. "Each parish has its own individual tool training. It is a basic course — hammer, drill, nails." But he says his dad has had him do projects for years so he is pretty good at building. "But some kids don't know anything."

Carolina Magro, from Alexandria, says she also did tool training. I could use a hammer but I'm not comfortable with power tools.

"We had a contractor watching us to supervise our projects step by step." Cameron said, "They were very big on safety — always wear safety glasses, gloves, drink excessive amounts of water."

McIntire says the first step was always to walk around the work site to spot any potential hazards like power lines or unlevel grounds.

Magro, in her second year as a volunteer, says this year she had lots of small projects for a deaf couple including installation of new storm doors, refurbishing the garden, fixing the railing and the outdoor steps. Her project last year had been the floor for a playroom for mothers with young children. She says the women and children were living in a temporary situation because they were homeless or in a bad place. Magro says she had heard a lot about WorkCamp and her sister had done it. "It's relational ministry and rewarding helping her and knowing her life changed."

McIntire says this is her third year at WorkCamp. "The first year I didn't know what I was doing but all the kids in the parish do WorkCamp." She estimates they had 40-50 teenagers this year from her parish. "It is important to make lasting friendships, not just superficial. I got close with the crew. Every year I would go in with the mindset that it wouldn't be as fun as the last year so you work harder, but I had an amazing experience."

Cameron says it was a joke in his family that his mom was going to make him go the first year and then he could go back if he liked. This is his third year; all three years he has been assigned to decking projects. "I like construction. It's very fun and I like helping people." He says the residents would come out and talk to them about once a day. "She had limited mobility but she seemed very thrilled with us."

McIntyre says that each day was pretty much routine starting with mass at 7 a.m. Emily Madden, a 4th year camper from Alexandria, said, "The bathroom lines are pretty long but that's just a little sacrifice you do for the good feeling you have." This is followed by breakfast. Cameron says they had breakfast each day with teenagers they knew but during the workday from 10 a.m.-6 p.m. they were assigned to a group of teenagers from a different parish. "They like to have you get to know each other.”

On the way to the site each day there was a "devo," a teen devotional leader who led the group in prayers during the car ride and lunch. Madden says they would have a discussion about what they were going to do that day, "tie in the Catholic aspect, make sure we were doing the work for the right reason."

Teresa Nguyen says everyone in the crew had a role. Hers was to be the "dynamo" to keep up everyone's spirits.

After they arrived at Madden's site she says it was measuring space for the gutters and chop sawing the pieces until the lunch break — peanut butter and jelly sandwiches, fruit, snack and drink every day. Then back to work until 4 p.m. followed by a shower. Nguyen said, "They wouldn't let you into dinner unless you had a shower. I can understand. It got pretty hot." After dinner there was a program with a speaker or musical performance "and one night I remember we had ice cream," Nguyen added.

Madden said, "The program was one of my favorite things with lots of music. You got to be with your parish people and your new friends." Madden says this is her 4th year of WorkCamp where she helped build a wheelchair ramp. "It was somewhere close to King's Dominion. It was kind of funny, we passed King's Dominion every day going to the site and coming back." Next year Madden hopes to return to WorkCamp as part of the home base crew and when she is old enough as an adult leader.

Nguyen, also in her 4th year of WorkCamp, says last year she helped repair a wheelchair ramp "that had boards poking out and nails everywhere" so that the resident's grandson could safely get out of the house.” On the last day the residents can come together with the crews and they pass around the microphone. “What really touched my heart was my resident came with her two grandchildren and said they were no longer trapped inside the four walls of their house and her little granddaughter could now play outside on the deck without her having to worry and her grandson could get his wheelchair outside." Nguyen added, "We think they are letting us come inside their house and helping them, but they are really helping me."