Park Presentation to Commemorate the 35th Anniversary of ‘The Wall’
Votes

Park Presentation to Commemorate the 35th Anniversary of ‘The Wall’

Curator of items left at the Vietnam War Memorial will speak. 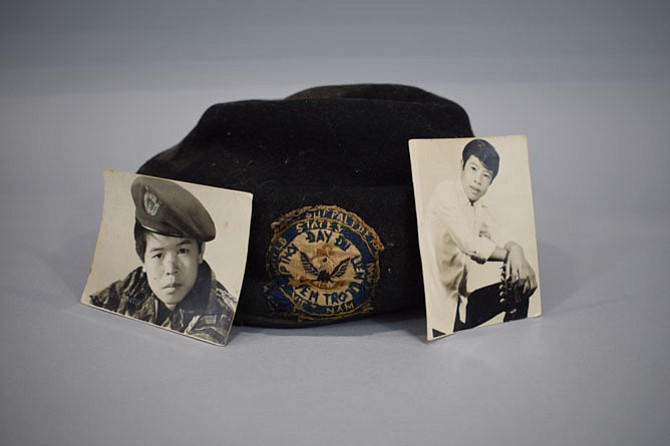 A hat and photos from a South Vietnamese soldier left behind at the Vietnam Memorial.

Fairfax — When the Vietnam War Memorial was opened in 1982, emotions and opinions

Sunday, Sept. 10, Janet Folkerts, curator of the Vietnam Veterans Memorial Collection, will present “The 35th Anniversary of the Vietnam Veterans Memorial,” sharing stories of the artifacts left at the Memorial and the soldiers they honor and memorialize. Vietnam Memorial Lecture, 2 p.m. at Fairfax Museum and Visitor Center. 10209 Main St., Fairfax. Free. Call 703-385- 8414 for more.

about the war were still flowing, and this started a steady stream of artifacts left behind at “the wall,” as it became known, to provide closure for some, or commemorate lives lost in that war for others.

The artifacts were collected through the years, stored in a park service warehouse, and were cataloged by then-intern Janet Folkerts, who is now a park service curator that uses the items as a backdrop for her presentation celebrating the 35th anniversary of the wall.

The items are “a catharsis, leave behind the past and move on,” she said.

And leave behind they did. There are medals, hats, clothing, pictures, and stranger things like a suede bikini or a full motorcycle. The motorcycle was from a veteran’s group in Wisconsin, commemorating the 35 missing in action soldiers from that state, and the bikini had a medal pinned to it. “No explanation or anything,” Folkerts said. There is also a beret from a South Vietnamese soldier, known as an ARVN, Army of the Republic of Vietnam, with two pictures of the soldier but nothing else.

Throwing the artifacts in a glass enclosed shelf and moving on was not an option for the park service, especially the motorcycle. “We had to make a storage container that rolls,” Folkerts said. There are boxes of other things that she cataloged and stored.

Folkerts is a graduate from the University of Maryland with a degree in archeology, so this collection is part of that realm, but has a few strings attached. Copyright law and the condition of some materials that were “left outside at a memorial,” presented obstacles, especially when things were “personally identifiable,” she said.

The Vietnam War was just one of the elements that made the 1960s such a turbulent decade, and many of the stirred up feelings about the war still continue today. Folkerts says there are “different opinions,” out there, but makes sure that she and the park service stand clear of any controversies, especially when working with veteran’s groups. “Let the veterans speak for themselves,” she said.

The presentation is part of the “Second Sunday” Program Series held at the museum. According to Susan Inskeep Gray, curator and visitor services manager at the museum. It will be the third Vietnam War-related program the Fairfax Museum and Visitor Center has hosted. One dealt with a traveling exhibition of reproduction art works commissioned by the U.S. Army to illustrate the war, and another was the memorial curator at the time. In previous years, attendees shared their experiences and memories of the Vietnam-era at the conclusion of the program.