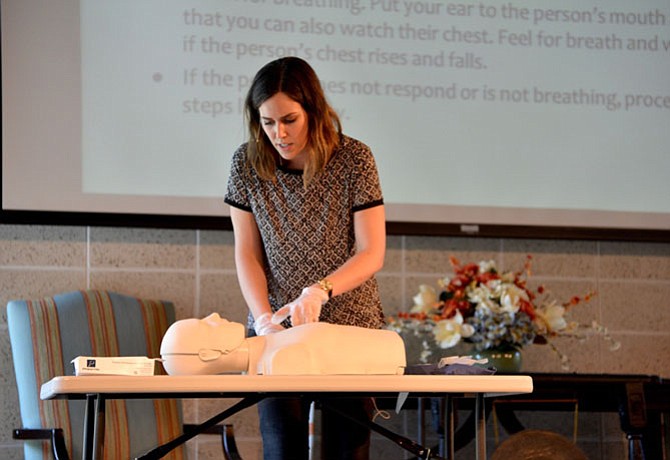 Ginny Atwood Lovitt, director of the Chris Atwood Foundation, shows the class how to recognize the symptoms of an opioid overdose and how to respond. After the training, the CAF and REVIVE! made Narcan kits for reversing the effects of an overdose available. Photo by Andrea Worker.

Melody Rose, a teacher from Fairfax, attended the training. “You see so much in the schools. This is really a serious problem.” Rose wanted to learn and to be prepared. 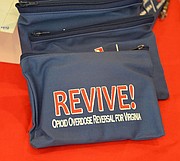 The REVIVE! kits with instructions, CPR victim mask, and gloves, and two doses of Narcan were available to those who completed the training. The Narcan distribution was funded by Leidos, based in Reston.

Ginny Atwood Lovitt is the executive director of the Chris Atwood Foundation (CAF), an organization that she founded with her family in honor of her brother Chris, lost to them from a heroin overdose. Their goal is to educate the public on the opioid crisis and to provide resources and support for those caught in its growing wake. CAF partnered with the Fairfax County Community Services Board and the Virginia Department of Behavioral Health and Developmental Sciences to create REVIVE! — the Commonwealth’s education program on opioids and the use of the drug naloxone that can reverse the effects of an opioid overdose when administered properly and in time.

Lovitt became a certified trainer for the program, and since 2015, has trained more than 200 people. On Aug. 18, at the Unity Church of Fairfax in Oakton, she hosted another session. The difference between this class and those that had been offered before was historic. Thanks to the passage of Virginia Senate Bill 848-2017 and House Bill 1453, for the first time, Lovitt and REVIVE! were able to offer Naloxone to those who completed the course and submitted their registration.

Naloxone is a medication that attaches to the opioid receptors in the brain, in effect, “knocking the opioids off” and allowing the overdose victim’s respiratory and cardiac functions to re-start for a short time.

The “Naloxone Accessibility” bills now allow agencies and organizations to offer doses of the medication to the general public on premises and immediately following the completion of the short approved training session.

Outside of its singular purpose at pushing aside the opioids, Naloxone has no other effect on body, so there is no danger to anyone who receives the drug accidentally. The dosage is the same for adults and children, so there is no fear of administering too much to a child.

“Before this, we were training, giving the knowledge, but not the tools,” said Lovitt.

Naloxone wasn’t even a consideration, when Chris Atwood was a client at any of the numerous treatment programs in which his family had enrolled him. “I don’t think it was even mentioned,” said Lovitt.

In 2013, she was the one who found Chris when he overdosed at the family’s home. “There was nothing I could do but call 911 and wait,” she told the class. “If I had had access to Naloxone, maybe he would be here with us today. I don’t want anyone else, any family, to go through this.”

OPIOID ABUSE and overdoses are a serious health issue in Virginia. Twenty-three people died in Virginia from prescription opioid abuse in 1999, the first year in which the numbers were collected. By 2013 the number had jumped to 386 deaths — a 1,578 percent increase.

Factor in the deaths from all opioids — prescription and illicit opioid drugs, and the number rises to 683 lives lost that year. The numbers have not yet been finalized for 2016, but early data shows 1,133 deaths attributable to opioid abuse — an almost 40 percent increase from the previous year.

In 2014, Governor Terry McAuliffe issued Executive Order 29, establishing a task force to study the issue and make recommendations to address the growing crisis. In November of that year, the Governor supported the Virginia Commissioner of Health’s declaration of the opioid abuse epidemic as a “public health emergency.” As of July, 2017, Virginia is one of six states to make such a declaration, according to the Network for Public Health Law.

The declaration of such an emergency “is like the state writing a prescription for the general public,” said Lovitt. A “standing order” was put into place, so that Virginians could go directly to their pharmacy and request Naloxone without seeing a medical provider.

A very important first step, “but that still wasn’t enough,” said Lovitt, whose experiences show that too many people won’t take advantage of the availability, whether because of the cost, or “more likely the stigma of asking for a drug to counteract an opioid overdose.” Lovitt took her story and her cause to her legislators and was “overwhelmed by the positive response.”

Three of the General Assembly members who championed the Naloxone accessibility bills in both the State Senate and the House were present at the training session.

State Sen. Jennifer Wexton (D-33) was one of the sponsors of SB 848-2017 and declared that she was proudest of its passage in the last legislative session. “Now we have to use it … and remember that combating the stigma is as important as combating the addiction.”

Del. Jennifer Boysko (D-86) said she was more than happy to help, when Lovitt came knocking on her door. “The Atwood Foundation is a real beacon of light,” she said, “looking to address the root causes of the problem, as well as the effects.”

Boysko also stated that she was heartened by the fact that the House Bill was supported “by representatives from every part of the Commonwealth. In today’s political climate, it … was miraculous that the bill passed unanimously.”

Del. John Bell (D-87), a retired major in the United States Air Force, shared a personal experience with the attendees. “My son asked me to go public with his story. He has been struggling with an opioid addiction for years … and we didn’t know it. We had no idea what to look for.”

After a car accident years earlier, the younger Bell was given a 90-day prescription for opioids for pain, with five refills. “He was addicted before the end of the first prescription,” said Del. Bell.

“He has been clean now for months,” but the fear is still there for the delegate and his family and others in their situation. As he noted, overdoses often occur when an addict relapses after having been clean of opioids for a while. The drugs can have a greater effect, especially if the user takes a dose equal to what they were using before, after long-term opioid abuse. “And no one is immune because of status, age, demographics or economics.” Bell referenced cases in Virginia that spanned the age spectrum from an 11-year-old girl, to a 78-year-old grandmother.

THE TRAINEES also heard from DEA Special-Agent-in-Charge, Washington Division, Karl C. Colder. “In 31 years in law enforcement,” said Colder, “I have never seen an epidemic like this … we now are even having babies born addicted.”

After the remarks, Lovitt got down to showing the trainees what to look for, how to respond, in what order to take the necessary steps, and how to administer Narcan, the nasal inhalant version of Naloxone, using mannequins as the victims.

As she demonstrated, Lovitt kept up a steady stream of advice and safety tips. “Remember,” she said, “the victim can revive suddenly … it’s like waking up to instant withdrawal for them. Ensure your own safety, as well as theirs.”

The Narcan kits, including the instructions, two doses of the medication with an inhaler, and a CPR breathing mask and latex gloves were then made available, free of charge thanks to the generosity of Reston-based, Fortune 500 Leidos, whose chairman and CEO, Roger Krone, also attended. “Our involvement is really from the grassroots,” said Krone. He received an email from one of the company’s 32,000 employees who was directly impacted by a family member’s overdose, and wanted to know if the company “would do something.” They did. “This is the biggest, unknown health crisis in America. We need to be involved.”

For information about upcoming REVIVE! Training, visit its website at revive@dbhds.virginia.gov. Read more about the Chris Atwood Foundation and their efforts, discover support and resources at www.chrisatwoodfoundation.org.