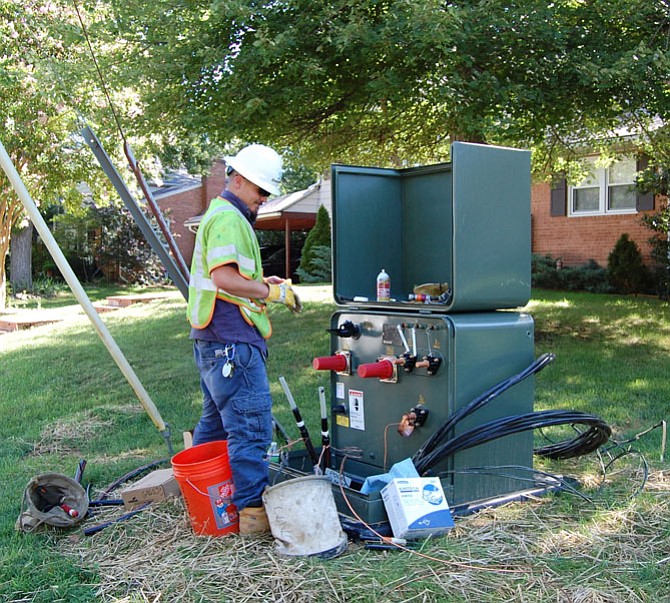 Dominion employee Justin Mangolas wires up one of the seven, ground-level transformers on the two-block stretch of Conover Place. Photo by Michael K. Bohn 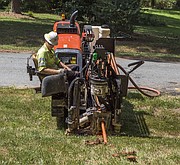 A Dominion contractor used a horizontal drilling machine like this one to install the underground power lines, obviating the need for a messy and tree-root-destroying trench.

“We are shifting the electric power lines from the poles to underground service,” one crewman replied. Just then, the questioner saw a resident climbing out of a nearby car and asked the woman what she knew about the work. “Dominion obtained everyone’s approval,” she said. “We think it’s great.”

Dominion Energy, the electric utility serving the Mount Vernon area, is in the midst of what the company calls its Strategic Underground Project throughout Virginia. In a handout available at DominionEnergy.com/Underground, the company describes the project as “a system-wide initiative to shorten restoration times following major storms by placing certain outage-prone overhead electrical distribution lines and equipment underground.” However, Dominion has no current plans to move overhead lines underground on any other Waynewood streets. The next planned target in the Mount Vernon area is the 5200 block of Mount Vernon Memorial Highway near Grist Mill Park.

Dominion is replicating underground the pole-mounted power network. The 19,000 volt primary or “tap” line, usually at the top of the pole, feeds transformers on the pole. The stepped-down 120/240 volt lines run from pole to pole and to the houses. The underground distribution network replicates the pole-mount system.

The company explains that tap lines “typically sustain the most damage during storms and require the highest number of repairs.” Using data from a 10-year period, Dominion has identified those streets with the highest incidence of tap-line outages. Company representatives contact each resident, explain the process of undergrounding the overhead lines and solicit the owner’s permission in the form of easements. The need for an easement is based on the route of the new underground system.

The company declares that burying tap lines will allow faster restoration after outages, but acknowledges it is not a cure-all. “During a major storm, large numbers of customers could still be affected,” the handout states, “because most underground electric service connects to overhead lines and equipment that are exposed to weather, trees, animals and vehicle accidents.”

Crews will remove the overhead power lines once underground service is connected to each house. But to the disappointment of most residents, the cable TV and telephone lines will remain on the poles on Conover Place. The existing pole-mounted streetlights will remain, powered by buried lines that emerge at the poles’ base.

Regarding the consolidated undergrounding of all pole-mounted utilities, Alison Kaufman, the communications manager of the Dominion project, said: “The focus of the Strategic Underground Program is to improve the electric service reliability for our customers. Similar to Dominion, the telecommunications and cable companies must also perform an independent evaluation to determine if existing facilities are candidates for conversion to underground. Where opportunities are identified to co-locate underground facilities on future projects, we will work closely with the telecommunications and cable companies to coordinate those efforts.”

On June 19, the first segment of the Conover Place project began and it involved the installation of the tap lines using horizontal drilling, versus trenching. Those cables serve seven ground-level transformers on the two-block stretch, which in turn feed power to multiple “pedestals” installed on grade. Those devices are connected to individual homes via buried service lines, which are installed also by horizontal drilling and connect to existing meters.

Nancy Murray, a Conover Place resident, said she was pleased with the project, because “we do lose power frequently.” She received a postcard dated May 31 from Dominion that described the planned activities and a schedule.

Don Hammond, a long-time resident on the street, generally approved of the project, but only reluctantly signed the easement document. He had concerns about a possible adverse impact of the power line emplacements might have on the sanitary sewer line from Waynewood School that runs between his house and his neighbor’s.

Across Conover from Hammond, resident David Mason has encountered a problem that he warned Dominion about before the project’s start. “I told them about the buried outflow line from my sump pump, but the crew damaged it anyway,” he said. “Dominion finally fixed it, but they seem willing to only do the minimum.” Mason remarked about the many power outages he and his neighbors have endured, so he is supportive of the undertaking.

Resident Brian Costanzo also mentioned the frequent power outages, some of which seemed to him to be caused by loud failures of a nearby pole-mounted transformer. He welcomed the project, saying, “I was impressed with Dominion’s communications effort. One guy came by the houses on the weekends to answer questions and explain the next steps.”

A Dominion contractor, Will-Bros, had crews on site starting Aug. 21 to connect each house to the underground power cables. While Dominion had notified every one of the switchover schedule, the crewmembers also knocked on doors to alert residents that they would lose power for a couple hours. Don Hammond said that he had no problems with the switch and that the workers were quite courteous. Another homeowner, Cappy Ulsamer, said, “My TV didn’t work after the change, but they came back and fixed the dish connection near my power meter.”

Charles Allen, another resident, was pleased with the switch. “It was pretty painless, and the cutover only lasted 45 minutes.”

While the residents lost their lights during the switch, the workers also suffered from a dim environment during the partial solar eclipse in the area on the 21st.

The process of cutting over residences on Conover from overhead to underground finished on Aug. 25. Dominion plans to remove the overhead lines during the last two weeks of September, followed by full landscape restoration. The company ultimately will send surveys to each resident to solicit feedback on the project.