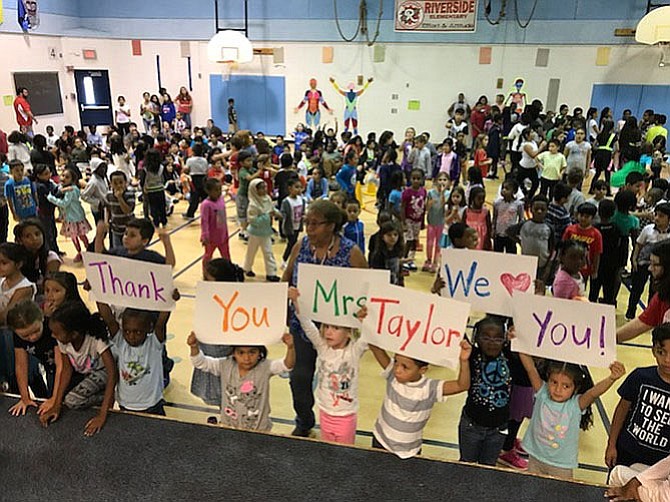 Riverside Elementary students and staff surprise “lunch lady” Dorothy Taylor with a celebration of her 40 years at the school. Full funding of K-12 education is a top priority for the Fairfax County Board of Supervisors. File photo

“We are emphasizing on page one opposition to federal tax reform and that is a position that I simply do not agree with.” — Braddock Supervisor John Cook

Traffic backs up on the Beltway in Fairfax County because of an accident on the American Legion Bridge. “It is vital that the capacity needs across the Potomac River be addressed. … The volume of commuters demonstrate that another crossing is essential to mobility in the area,” states the Fairfax County Board of Supervisors legislative program.

“I’m failing to understand anyone who believes this tax bill was built and predicated on helping low income people.” — Lee Supervisor Jeff McKay

Langley High School students arrive for their first day of school in September. Full funding of K-12 education is a top priority for the Fairfax County Board of Supervisors.

“Across the nation, local governments are going to suffer as a result of this tax package.” — Dranesville Supervisor John Foust

Most often, the Fairfax County Board of Supervisors appears unified. But last week, discussion about the pending tax reform measure in the U.S. Senate and House of Representatives sparked discord.

“My primary concern on the federal package is that we are emphasizing on page one opposition to federal tax reform and that is a position that I simply do not agree with,” said Braddock Supervisor John Cook.

The board adopted its updated and revised strategies and principles for the 115th Congress on Tuesday, Dec. 5, despite objections voiced by Cook and Springfield Supervisor Pat Herrity, the two Republicans on the 10-person board.

“The concept of reducing tax rates and eliminating deductions is one needed for the national economy and I am disappointed that despite my requests and Supervisor Herrity’s requests, the board is only looking at one side of the tax reform issue and that is the elimination of deductions, and not looking at the other side which is the economic growth potential that come with the other aspects of it,” Cook said.

MAJOR TAX REFORM packages have passed both the U.S. Senate and House of Representatives, and a reconciled bill is expected to affect almost every aspect of the economy. The measures differ, but both increase the standard deduction and eliminate or cap many itemized deductions, including the deduction for state and local taxes and the deduction for mortgage interest payments.

In Virginia, 1.5 million households claim $16.5 billion in state and local tax deductions, according to U.S. Rep. Gerry Connolly (D-11). Connolly said in a release that 280,000 households claim this deduction in Fairfax County, for an average deduction of $16,535.

“As a matter of fact, that [federal tax] bill was structured in a way, in my opinion, to explicitly discriminate against more urban localities across the country which do have higher assessed values,” said Lee Supervisor Jeff McKay, “and in a lot of cases higher tax rates because they believe morally that we must provide certain services for our population.”

Page 1 of the Board of Supervisors Strategies and Principles for the 115th Congress expresses concern about changes in tax policy:

“Because revenue options for localities in Virginia are extremely limited, the County opposes actions that impact County revenue sources or programs, including eliminating or capping federal deductibility for state and local taxes, which are used to fund education, public safety, transportation, infrastructure and human services (current law allows taxpayers to deduct state and local taxes paid from their federally taxable income, preventing double taxation and allowing state and local governments to maintain authority over the tax structures supporting those services).”

“I just have to say, I just cannot accept that the tax package that is before the federal government is anything but destructive to local government which is where things are actually getting done these days,” Foust said.

Herrity countered, “You can’t talk about that piece of it while ignoring the fact you're doubling the standard deduction and the value that brings especially to our low income residents.”

“Over 60 percent of our budget is built on revenue from real estate. To mess with or tinker with our largest source of revenue in any way that can have an effect on what people can sell their property for, what people can afford to buy and what their bottom line is and how that bottom line affects the county’s revenue — to ignore that would be absurd,” McKay said. “It absolutely will have an effect and local governments across the country see that.”

“I was going to be silent, but I think it is hard to do so,” said Catherine Hudgins, Hunter Mill District supervisor. “The tax package really sounds like something that is going to be very destructive in the long term.”

Cook did not budge.

Read Strategies and Principles for the 115th Congress here: www.fairfaxcounty.gov/government/legislation/2018/adopted-federal-legislative-strategy-and-principles.pdf

LEGISLATIVE PROGRAM WITH A SIDE OF OPTIMISM?

During the same board meeting on Dec. 5, supervisors formally adopted the 2018 Legislative Program for the General Assembly, with a note of optimism based on changes in the makeup of the House of Delegates because of last month’s elections.

Jeff McKay, chair of the board’s legislative committee and Lee District supervisor reiterated the importance of schools as the county’s top priority, citing particular concerns about state failure to provide any funds for teacher raises in FY17, and very limited funds in FY18.

“Our [state legislative] program features state support for education as its top priority, and urges the state to fully meet its responsibility to adequately fund K-12,” said McKay.

TRANSPORTATION IS another priority.

“In this year’s program, we’ve also elevated our WMATA position into its own priority statement which encourages the General Assembly to support dedicated funding and governance reforms for Washington Metrorail.”

The region will have to work together to address Metro’s critical funding needs, McKay said.

The Human Services Issues paper, which accompanies the legislative program, includes three priorities, according to McKay. “The first is increased state resources for the Children’s Services Act. The second relates to increasing waiver rates and slots for those with developmental disabilities. And the third is state support for diversion services for nonviolent offenders experiencing mental health crises; this is in line with the county’s diversion first initiative.”

Herrity, Springfield District supervisor, was the lone vote against the legislative program this year. The program was adopted, including the Human Services issue paper, on Tuesday, Dec. 5.

NEW BRIDGE OVER THE POTOMAC?

The Legislative Program asserts the importance of addressing capacity and congestion crossing the Potomac River.

“The American Legion Bridge, one of the most heavily used in the region, is also the most congested. .... Since the largest number of vehicles traversing the American Legion Bridge travel between Fairfax and Montgomery Counties, the chokepoint created by this bridge requires long-term solutions. … The volume of commuters demonstrate that another crossing is essential to mobility in the area. … It is vital that the capacity needs across the Potomac River be addressed, including at the American Legion Bridge and Rosslyn Tunnel, to alleviate the existing congestion.”