Jim Hart, who serves on both entities, addresses the WFCCA. 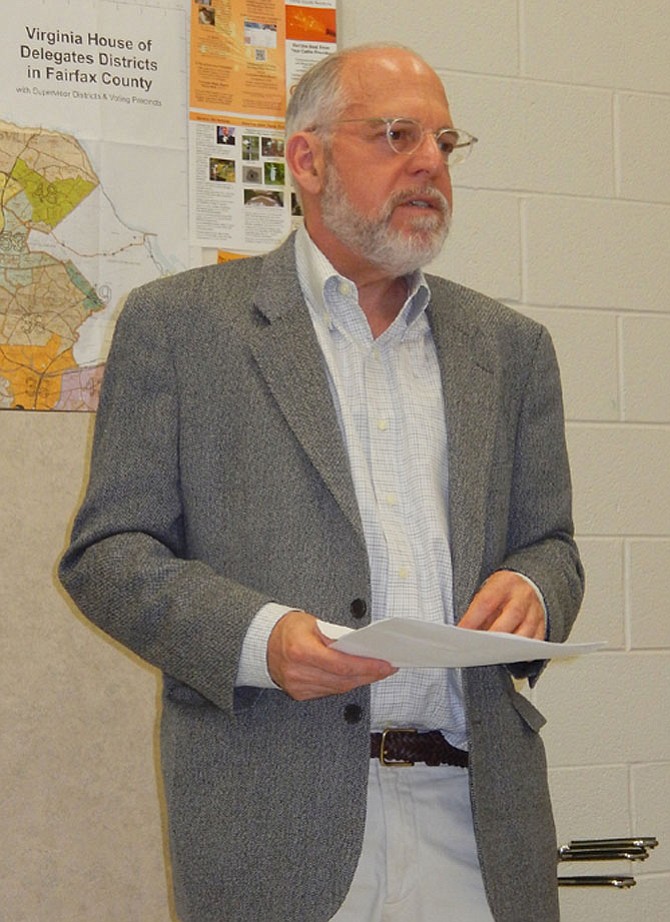 Previously, he chaired the Land-Use Committee of the West Fairfax County Citizens Assn. (WFCCA). And recently, he addressed the WFCCA’s quarterly meeting to give an overview of some of the issues before the Planning Commission.

“The county is looking into a geographically targeted system for land-use notifications,” said Hart. He said residents could opt in or out of it, but the information coming their way would be beneficial to them.

“It would provide them with early and accurate communications when an application is filed,” he said. “That way, people can know what’s coming and how to contribute their input to it. And the land-use associations [WFCCA and the Sully District Council of Citizens Associations] are also an important part of this process.”

Noting that the Planning Commission has 12 members — three, at-large, and nine representing magisterial districts — he said they vet proposals and make recommendations to the Board of Supervisors. “And we approve 2232 applications, ourselves, dealing with public facilities and land,” said Hart. “We look at their location, character and extent to see if they’re in conformance with [the county’s] Comprehensive Plan.”

For years, the Planning Commission has met at the county government center, on Wednesdays and Thursdays, at 8:15 p.m. But to make the meetings more accessible and, hopefully, end earlier, starting in January, they’ll begin at 7:30 p.m. People unable to attend may also send comments via email to plancom@fairfaxcounty.gov.

Regarding the Comprehensive Plan, for the first time in many years, there’ll be a North County cycle for amendment proposals. Site-specific, proposed, plan amendments made by area residents were accepted by the county until Dec. 5.

Next, said Hart, “A citizen task force for every magisterial district will be established to examine each proposal. Then in spring 2018, only the best or most deserving nominations will go forward in the work process for consideration by the Planning Commission.”

In light of the large amount of vacant office space in the county, in November, the Planning Commission considered office-building repurposing. Already, said Hart, one such building has been turned into a school, and another was proposed as “a live/work/office [entity] for people who couldn’t otherwise afford it.” If successful, he said, “It could be an alternative to affordable housing.”

“We’ll also consider energy efficiency in green buildings,” said Hart. “We’ll update the language about the priority of energy conservation in a building, as opposed to other things.”

The Planning Commission also discussed Zoning Ordinance modification to streamline project approvals and reduce some bureaucracy in the process. “The [county’s] Zoning Ordinance hasn’t been rewritten in 40 years,” said Hart. “There have been 400-plus amendments since 1978, and it needs plain, understandable language.”

Also important, he said, is the Minor Modification Zoning Ordinance amendment. “It would help with, for example, a small addition to a church or building-façade improvements,” he said. “It would make it easier to do them, with less red tape.”

Another critical issue that came before the Planning Commission was how to regulate short-term lodging, such as Airbnb. “We had over 7,000 responses to our survey and over 3,000 written comments,” said Hart. He also made it clear that the county “won’t undercut” homeowners associations’ covenants, but that some disputes “might have to be determined by a judge.”

He said the Planning Commission will look at the definition and uses of agri-tourism. For example, he asked, “Is a ropes course allowable [in this category]? And to what extent is agriculture a secondary use to other things?”

In addition, said Hart, “Continuing care, adult daycare and senior-citizen living areas are going to become more prevalent in the county as its residents age. So we need to look at these things, too.” Furthermore, he added, “We’ll also look at parking reductions in applications, plus definitions of what is a restaurant.”

Regarding the county’s Capital Improvement Program (CIP), the Planning Commission makes recommendations to the supervisors once a year. “It helps the supervisors determine what [bond] referenda — and for what and for how much — we’ll have in future years,” said Hart. “For example, these could be for schools, parks, public safety, libraries and some small transportation projects. In the spring, there’ll be a Planning Commission workshop and public hearings about the CIP.”

As for the BZA, he said it’s comprised of seven, at-large members. “We hear special-permit and variance applications and also appeals,” said Hart. “We meet Wednesdays at 9 a.m., and they’re all-day meetings. Our job is to vet these things, and we can’t do it without community engagement. That’s why we want people to be aware of what’s being proposed and get involved.”