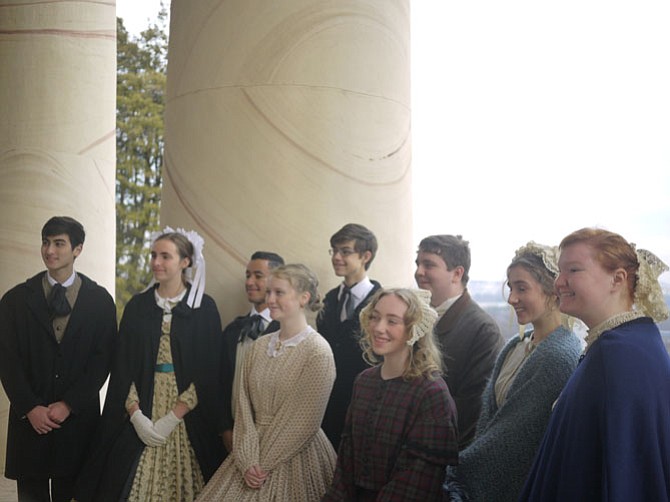 “But you know the Christmas tree in the corner would never have been in this house in the 1850s,” said John Michel, dance master of the Victorian Dance Society. “It’s an anachronism, because Christmas trees were only popular in the U.S. after the Civil War, when Queen Victoria and Prince Albert had made decorating a tree at Christmas fashionable. Until then, Americans might put holly or fir branches in a basket in the house to decorate for the season.”

Michel and Jones, part of the Victorian Dance Society, each had a blue cockade festooning their jackets or dresses. The Virginia cockade, as it was known, was a symbol of Virginia pride before the state seceded from the Union. Many states had cockades to express their political views. The Virginia seal is in the middle of the blue silk rosette.

The group was having fun mastering the steps and looking dashing in their uniforms and hoops. Michel urged anyone interested in joining the dancing to see their facebook page, The Arlington House Victorian Dance Society, or to contact him directly at Arlington Victorian Dance@gmail.com.