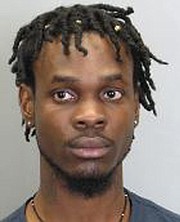 Detectives from Fairfax County Police Department’s Major Crimes Bureau have identified Endless Taylor, 24, of Alexandria, as a suspect in a homicide that took place on Dec. 1 in the Alexandria area of the county. Taylor is suspected of stabbing and killing 24-year-old Luis Bonilla in the 7100 block of Fairchild Drive. Taylor is wanted for murder and robbery. It appears Bonilla and Taylor were acquaintances.

Detectives are investigating a disagreement between the two in the weeks leading up to the murder. Detectives were able to recover the victim’s phone, which was taken during the robbery, which ultimately helped us identify Taylor.

Taylor is a black man, around 5’9", and weighs 175 pounds. He has black hair and brown eyes and has tattoos on both sides of his neck. Detectives are asking for the public’s assistance in locating Taylor and believe he is armed and dangerous. Anyone with information about this crime or the known whereabouts of Taylor are urged to Contact Detective Needels at 703-246-7904.

Tips can also be submitted anonymously through Crime Solvers by visiting www.fairfaxcrimesolvers.org, or text-a-tip by texting “TIP187” plus a message to CRIMES (274637). Anonymous tipsters are eligible for cash rewards of $100 to $1000 if their information leads to an arrest.