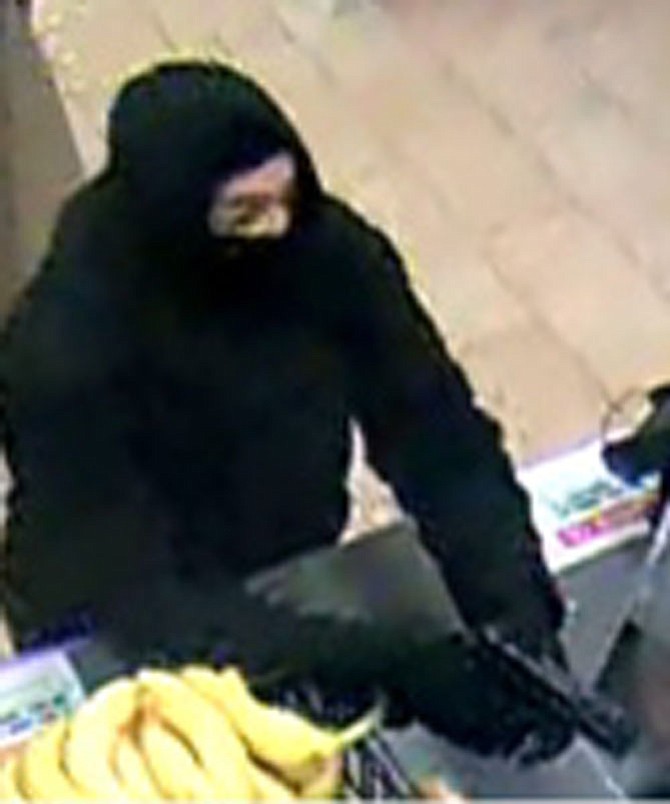 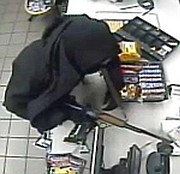 According to Fairfax County Police Department, "In one case, a gas station robbery on Centreville Road (in Herndon) on Feb. 10, a suspect was armed with a rifle."

The Exxon Gas Station at 2990 Centreville Road in Herndon was one of 19 regional robbery sites in Fairfax County and Loudoun County. The suspect was armed with a rifle. Fairfax County Police detectives believe this robbery is connected to the others.

On Feb. 8, 2018, at 12:44 a.m., a male entered the 7-Eleven in Herndon located at 2501-104 McNair Farms Drive and went to the counter to purchase an item. When the clerk was reaching for it, the suspect displayed a gun and demanded cash. He was last seen wearing a black jacket, blue jeans, and sneakers.

Fairfax County Police Department (FCPD) report they are investigating nine commercial robberies often involving gas stations and convenience stores that have occurred in their patrol districts in the past five weeks. Fairfax Police Department believes the nine robberies are the latest in a string of 19 area commercial robberies that are connected, including two in the Town of Herndon and eight in Loudoun County. The Town of Herndon has its own police department.

Fairfax County's Major Crimes Bureau is working with detectives from three agencies, Herndon Police Department, Loudoun County Sheriff’s Office, and the FBI Violent Crimes Task Force to identify suspects in these robberies, all of which have occurred since mid-January and recently reflected an uptick in frequency.

According to Fairfax County Police, the first robbery in the suspected series occurred on Friday, Jan. 19, 2018, at the Exxon gas station located at 2957 Chain Bridge Road (Oakton). Then on Thursday, Feb. 8, 2018, a male entered the 7-Eleven at 2501 Centreville Road (Herndon, Fairfax County) and went to the counter to make a purchase. When the clerk was reaching for the item, the suspect displayed a gun and demanded cash. He was last seen wearing a black jacket, blue jeans, and sneakers.

On Saturday, Feb. 10, Fairfax County Police responded to a robbery at the Exxon gas station at 2990 Centreville Road in Herndon. A man armed with a rifle robbed the store of an undisclosed amount of cash.

According to Herndon Police Department (HPD on Sunday, Feb. 11, 2018, in the 1100 block of Crestview Drive, at 11:28 p.m. “a suspect entered the business, approached the clerk behind the counter, produced a handgun, and demanded money from the registers. After being given an undisclosed amount of money, the suspect left the store on foot and appeared to walk towards Crestview Drive in the direction of Wexford Court. The suspect is described as a light-skinned black or Hispanic male, 5’5” to 5’7”, wearing all black clothing and shoes, and a black ski mask.”

On Thursday, Feb. 15, 2018, shortly after 10 p.m, Herndon Police Department reports, “…a suspect entered a business, approached the clerk behind the counter, produced a handgun, and demanded money from the registers. After being given an undisclosed amount of money and several packs of cigarettes, the suspect left the store on foot and walked towards Jackson Street. The suspect is described as a white male of average height and build, wearing all black clothing, and a black ski mask.”

The investigation is ongoing. HPD is working with detectives from Loudoun County Sheriff’s Office and Fairfax County Police Department on possibly related cases.

Fairfax County Police Detectives released surveillance photos and are asking for anyone with information to contact them, stating, "The suspects appear to be males between 5’4” and 6’ tall... If you recognize the suspects, or if you have any information about these crimes, please contact our Major Crimes Bureau at 703-246-7800. Tips can be submitted anonymously through Crime Solvers by visiting www.fairfaxcrimesolvers.org or calling 1-866-411-TIPS. They can also be sent in via text by texting “TIP187” plus the message to CRIMES (274637). Text STOP to 274637 to cancel or HELP to 274637 for help. Message and data rates may apply. Anonymous tipsters are eligible for cash rewards of $100 to $1,000 if their information leads to an arrest."